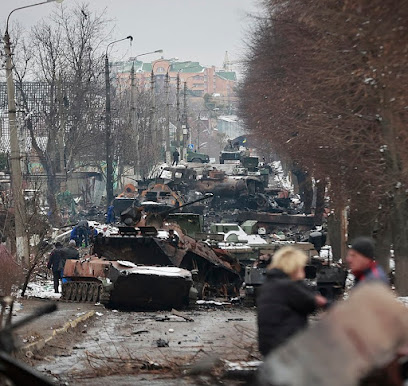 Wikipedia now lists the Battle of Kyiv (2022) as a Ukrainian victory.

BBC video shot mostly in Bucha and Hostomel, includes a walk through of the scene of devastation on the Bucha road (above) that inspired my poem, as well as what look like dozens of civilian murder victims.

Interesting intercepted call from a Russian soldier. And one who describes killing civilians. And another featuring two men scheming to get home alive.

The scene in liberated Trostyanets.

Military analysts contacted by the Washington Post say that of the 120 battalion tactical groups Russia had at the start of the invasion, at least 20 are too whipped to fight any longer, "a figure likely to be higher since the Ukrainian advances of recent days." The Ukrainian MOD is saying 16 Russian BTGs "destroyed," 34 more badly damaged.

At a courier service in Belarus, a steady stream of Russian soldiers shipping looted goodies home to their families and girlfriends. Also rumors of flea markets set up in Belarusian towns.

Discussion of the way the US and Britain have used secret intelligence during the war. As I suspected, US now confirms that they alerted Ukraine to the Russian plan to seize Hostomel airport and fly in reinforcements at the start of the war, helping Ukraine to blunt that attack.

Institute for the Study of War Battle Assessment for 3 April.

Hardly anyone in the west believes that the Russians never intended to take Kyiv, or that their goal all along was to expand the territory they control in the south and east; but, asks Bret Stephens at the NY Times, what if that was true, and what they really want is to seize Ukraine's energy resources, especially natural gas? If so, I would say, then what the west has to do is ban all Russian energy imports. Which we should do anyway.

The Ukrainian-made laser-guided artillery shells they have used to destroy many Russian tanks.

The guys who usually identify destroyed and abandoned weaponry have a go at identifying the washing machines Russian soldiers were trying to steal when their truck was hit. I guess they are worn down by the sheer volume of destruction and need some levity.

Pro-Russia rally in Berlin, just a short video but the western media seems not to be covering this.

Speaking of the guys who count destroyed vehicles, their totals are soaring as they work through images from the Russian retreat. As of right now they show Russian losses as 405 tanks, 763 infantry fighting vehicles, armored personnel carriers, etc., 71 self-propelled artillery, 45 multiple rocket systems, 42 surface-to-air missile systems, 19 jet aircraft, 38 helicopters, and 687 trucks and jeeps, plus sundry others for a total of 2,239 major pieces of equipment, which is about 25 battalion tactical groups worth of gear; the tank total is about 1/3 of what the Russians started with invasion with. If other areas of intense fighting are anything like Bucha, Hostomel and Irpin, the counts of armored vehicles, artillery and trucks are way low, and the total Russian loss is likely over 3,000 systems.

I highly recommend the below, which features detailed wargamer-style maps but conveys plenty of not-strictly-military information as well. Dated April 2.

Recommended also is this article on the debate within the Marine Corps about the reforms John has talked about. It looks like they've gone pretty far with them. I wonder what happens to the pilots when the Marines get rid of a unit of attack helicopters, or the crews when they get rid of tanks? Are they fired? Retrained? Anyway, it looks like the Corps may be in part responding to the results of the Taiwan war games John referenced a few months ago, which IMHO would be smart. But I also think they're trying to leave the next Fallujah to the Army.

It was interesting to read how a Finnish military specialist and officer evaluated the Russian strategy in Kiev. He said that it was so poor, that if someone in a Finnish officer education would have suggested something similar in an exam, he would have been discarded.

Good to hear a Finnish perspective - they take the quality of their military very seriously, as they should living in the shadow of the Russian bear.

As an aside, I sort of wonder if this wouldn't be the opportunity of a lifetime for the Finns to take back Karelia and other territories lost in the Winter War. Forcing Russia to open a second front on the opposite side of their European theater at a time when their entire army is in major disarray would be devastating - and it would have the benefit of relieving pressure on the Ukrainians.

I suppose the big concern is that if things start going too badly for Russia, Putin might seriously consider deploying Russia's nuclear arsenal. Although... who can say he isn't already doing that? He's certainly threatened it enough. It's nearly impossible to know when he's bluffing and not.

@G. Verloren
The willingness is reduced by the fact that people born in Karelia are already laying silently in a graveyard, or at least at a very high age, and their descendants have built up their living elsewhere. Furthermore, Karelia has some 300 000 Russian inhabitants, and no one in Finland wants them into the country. These in addition to the reasons you mentioned.

But yes, I don't seriously expect Finland to declare war. Just was an idle thought.