Leonora Carrington and the Mad Longing for Freedom 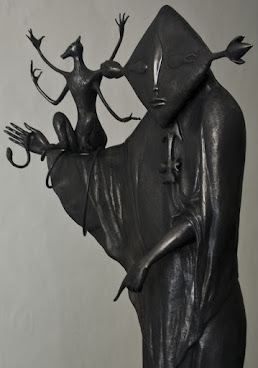 Consider this essay Part II of my exploration of human frustration with the limits of our world. My first piece looked at our ambivalence toward the disciplined middle class existence that is our society's version of the good life: study hard, work hard, keep healthy, stay sober, etc. Today I look at something farther afield, the mad rebellion of artists and freedom lovers against the constraints, not just of our particular society, but of any imaginable society, and in fact of the physical world itself.

Leonora Carrington (1917-2011) is my favorite Surrealist, and she also led a crazy life, so I eagerly dived into an article about her by Merve Emre in the December 28th New Yorker. Emre focuses on the human/animal/machine transformations and hybridizations that fill Carrington's paintings. sculptures, fiction, and even her “memoir.”

The distinctions between human and animal, animal and machine, flicker in and out of focus in her early stories, but the fiction she wrote in the nineteen-fifties and sixties dissolves them lavishly. Here we find several barnyards’ worth of chimeras, extravagant beings who commune with all manner of “mechanical artifacts.” They are bearers of utopian hopes and victims of threats from ordinary humans. Consider her story “As They Rode Along the Edge,” a romance featuring Virginia Fur, not quite woman, not quite cat, with “bats and moths imprisoned” in her hair and a blind nightingale lodged in her throat.

This way of writing – Alice in Wonderland infused with Marxism, feminism, and shamanism – was part of Carrington's great revolt against the thing she hated most, Conformism. (She liked that capital letter.) Raised in a wealthy British family that tried to discipline her into a proper lady, she rebelled in every way she could think of, eventually (at 19) running off to Paris and never speaking to her parents again. Surrealist Art was the first thing in life that really captured her attention. She was an immediate hit in surrealist circles, modeling and acting as a muse. She was not satisfied with those roles, though, and made herself into an artist by force of will. She fled World War II and ended up in Mexico City, where she spent the rest of her life. 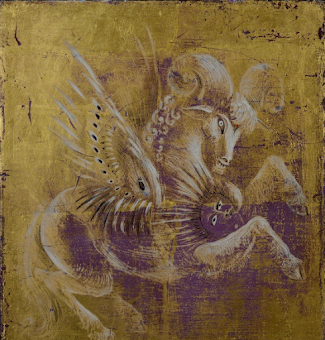 A passage from Carrington's surreal novel, The Hearing Trumpet:

“It is impossible to understand how millions and millions of people all obey a sickly collection of gentlemen that call themselves ‘Government’! The word, I expect, frightens people. It is a form of planetary hypnosis, and very unhealthy.”

“It has been going on for years,” I said. “And it only occurred to relatively few to disobey and make what they call revolutions. If they won their revolutions, which they occasionally did, they made more governments, sometimes more cruel and stupid than the last.”

“Men are very difficult to understand,” said Carmella. “Let’s hope they all freeze to death.”

The women have no use for frozen institutions. What they seek are living communities for all creatures, forged not through domination and cruelty but through care and mutual assistance. . . . Together, they forage mushrooms, raise goats, conjure bees whose honey they lick from their bodies, and make spinning wheels. They hope to people the frozen earth with “cats, werewolves, bees, and goats”—an “improvement on humanity,” Marian declares.

I encounter fantasies like these all the time: leave behind the people and their rules, their demands, their schedules, and live free, either in the woods with the goats or in anarchic communities governed by kindness and solidarity. And Carrington didn't just write about such freedom, she tried in a small way to make it real.

Perhaps what made the novel’s surreal ending conceivable was the environment in which it was produced, the artistic community that formed around Carrington in Mexico City. She arrived there in 1942, and found a city full of socialists and communists in exile, its arts scene presided over by the suspicious luminaries of Mexican Muralism. (Frida Kahlo apparently called Carrington and her circle “those European bitches.”) She married the Hungarian photographer Chiki Weisz, had two children, and created a new “Surreal Family,” anchored by two friends, the photographer Kati Horna and the painter Remedios Varo. The family was a matriarchy, committed to dissolving the boundaries between the daily work of art and the daily work of care—a feminist project more enduring and surreal than any single romance or school of painting.

For the next several decades, the family experimented with traditional craftsmanship. Carrington’s studio was “a combined kitchen, nursery, bedroom, kennel, and junk-store,” her patron Edward James observed, impressed by the magic she could wring out of domesticity. Atop a table one might spy a cot for Horna’s daughter, with a parade of long-necked animals that Carrington had painted around the base; in later years, a folding screen, a gift for Carrington’s son Gabriel, with whom she would smoke the marijuana she grew on the roof.

There is something quite appealing about this, people supporting each other, not abandoning their children to work but incorporating child care into their days; real mutual assistance, not just rhetoric. It's something many contemporary women long for. But of course it was only possible because of that patron, Edward James, who inherited a vast industrial fortune that he spent supporting many avant garde artists. Later on Carrington made enough money as an artist to support the whole household, but very few artists ever achieve that level of success.

I see in Carrington a desperate desire to break free, not just of her own routine existence but of something much more profound. You see the same longing in Jack Kerouac's On the Road, Tom Wolfe's The Electric Kool-Aid Acid Test,  Thelma and Louise, and hundreds more road stories; you may have felt it in dreams of flying.

Now you might say that this is too much of a dream or fantasy to have many real world implications, but I disagree. I think this attitude is common among right-wing militiamen, anarchists, and the sort of left-wing sensitives who have been protesting on college campuses. Jack Kerouac and the Merry Pranksters were real people, as was Timothy McVeigh. Anarchist David Graeber's Debt: the first 5,000 Years is a magisterial work on the history of debt, markets, and the state by a real scholar, but insofar as he offers any solution it is the disappearance of government and a return to small-scale village life.

I would argue that dissatisfaction with the whole basis of our society is widespread and regularly pops up in a thousand ways, from radical politics to "Where are our flying cars?" memes. I sometimes think the whole trans movement is another expression of this basic longing to cast away all limits and live free. What is anarchism, at its base, but a fantasy of profound freedom? Much of our fascination with art and artists, especially rebel artists like Carrington, seems to me allied to this longing. I think people want avant garde art and revolutionary politics to go together because they see both as expressing our dissatisfaction with the cruel mundane and the possibility of soaring free.

It's arguably a subordinate point, but my impression so far in Electric Kool-Aid Acid Test is that Wolfe is subtly, or maybe not so subtly, undermining the whole fantasy. To me, he depicts the Merry Pranksters as not so much living free as revolving like pathetic, almost puppyish satellites around Ken Kesey. Everyone, not least Kesey himself, seems to accept the basic reality that the decision-making power, worthiness ranking, and the great yea-or-nay are all his. When Kesey speaks, the Truth has spoken, and all the little filings realign themselves accordingly. At bottom, the fantasy in the Pranksters' case may have been less universal freedom and equality, than a sort of pleasure-oriented version of an Old Testament patriarchal clan with Kesey as Abraham.

Yes, but with complete contempt for bourgeois society and its rules, which they wanted to smash.

How following cult leaders fits into this paradigm is something worth looking at.

In the case of modern movements like Carrington's and Kesey's, it's bourgeois society that's being rejected. But it seems to me that virtually every complex, settled society has produced this sort of rejection-phenomenon, from Pythagoreans and Sufis to the White Lotus and peasant mutual-alliance societies in China. And hunter-gatherer bands have their own tendency to split or produce self- or other-imposed movement from one group to another. Perhaps what we're talking about is a phenomenon inseparable from human society itself.

As for the cult leader aspect, certainly some but not all rejection societies take this form (just as some but not all dominant societies do). And, of course, one has to admit some cult leader types are worse than others. I obviously don't much like Kesey as Wolfe depicts him, but even I would have to admit it's a long way from Kesey to Jim Jones.