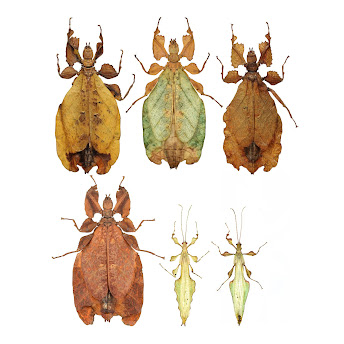 The leaf insects in the genus known as Nanophyllium asekiense come from New Guinea, where they are shy and not very common. But enough specimens had come to the attention of biologists to make them wonder why all of them were female.

Meanwhile the stick insects known as Phyllium frondosum were known only from males.

Not until a clutch of eggs from a wild-caught female were raised in the Montreal insectarium was it discovered that these separate groups of insects were one and the same, with females just very different from the males (see photo). (Original article, NY Times story)