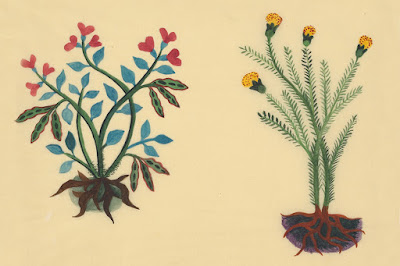 The Spanish conquest of Mexico happened so fast that nobody had time to think about what sort of regime or society would emerge afterwards. It would be Catholic, of course, but other than that the Spanish did not agree about anything, and the native aristocracy remained powerful enough for decades to exert their own views. 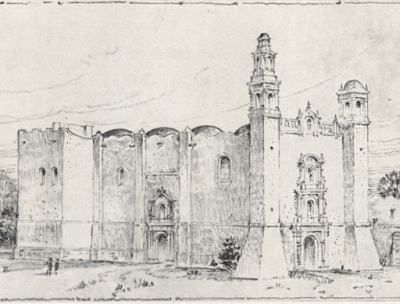 Church of Santa Cruz, only surviving remnant of the college

The College of Santa Cruz, founded by the Franciscans in Mexico City in 1536, is a good case of how these conflicts played out. The purpose of the college was to train Aztecs from elite families to be Catholic priests. The college had two Spanish Franciscans as teachers, aided by a native assistant, and several dozen sons of elite Aztec families attended. They were taught Spanish, Latin, theology, and "grammar," that is, the basics of Latin literature and composition. But other forces, led by the Dominicans, opposed this whole plan; they kept the school from ever receiving adequate funding and in 1555 banned any native from becoming a priest. By then, our sources say, the school was already a ruin. During its brief life, however, the school did manage to train dozens of Aztec men. One of its instructors was Bernardino de Sahagún, who published several books on the Aztecs and the Nahuatl language and also the famous General History of the Indies, an immense project on which he was helped by students at Santa Cruz. 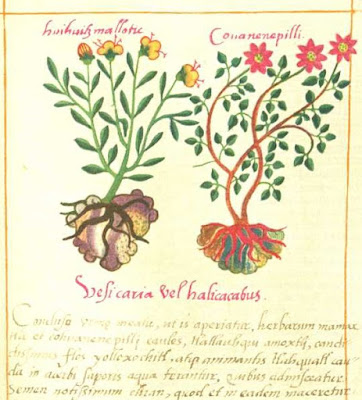 One of the most notable graduates of Santa Cruz was Martin de la Cruz. De la Cruz wrote, in Nahualt, the manuscript that was then translated into Latin by Juan Badiano as Libellus de Medicinalibus Indorum Herbis, the first work to document Native American knowledge of plants. Badiano's autograph copy ended up in the Vatican Library, where it languished in obscurity for 400 years. The Vatican Library was infamous until recent times for its habit of hiding important, potentially controversial books under boring titles that nobody would ever ask for, and then sometimes of being unable to find them if they were asked for. Anyway hardly anyone had read this book until 1929 when an American named Charles Clark arrived from the Smithsonian searching for early Latin American manuscripts. With backing from Vice President and Smithsonian board member Charles Dawes, Clark was able to get the Vatican to let him photograph and then publish the manuscript, something almost unheard of in those days. 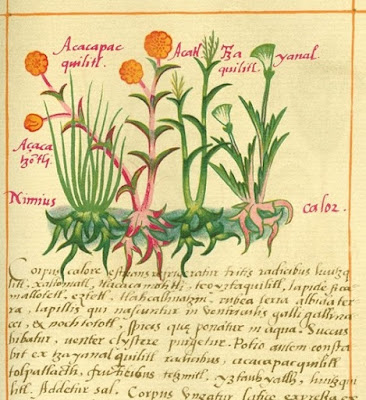 The Spanish were very interested in Native plants and their properties. In the letter Cortes wrote to Emperor Charles V describing his conquest of Mexico, he mentioned that the market district of Tenochitlan included "a street of herb sellers where there are all manner of roots and medicinal plants that are found in the land. There are houses as it were of apothecaries where they sell medicines made from those herbs both for drinking and for use as ointments and salves." Valuable plants were one of the things Europeans were seeking around the world, and of course cacao, tobacco, corn, potatoes, hot peppers, and other American plants ended up being worth many times more than all the gold in the world. 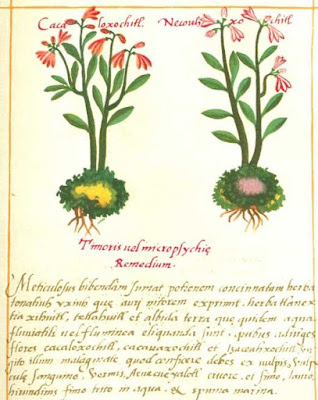 So plant lore was big business in 1552, when someone got de la Cruz to write this manuscript and then paid Badiano to translate it. The Latin version was written on fine parchment and bound in velvet. It is one of the purest sources for Aztec thinking about the natural world, written by a knowledgeable native in his own language. 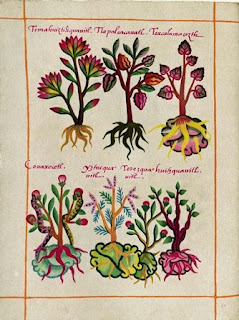 It describes, among many other things, giving patients hypnotic preparations of datura before surgery, which is pretty much what was done to me when they operated on my wrist. Plants are listed for treating bleeding, skin rashes, headaches, colds, wounds, and so on, including those great stables of pre-modern medicine, laxatives and purgatives. Some of these plants are still used by folk healers in Mexico for the same purposes described by de la Cruz, showing strong continuity within the oral culture. 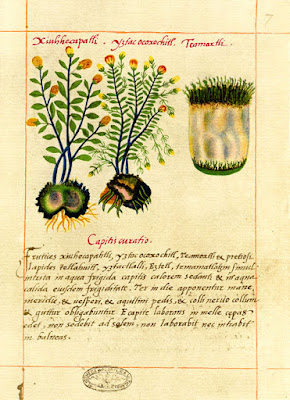 Anyway I can't recall having heard of this manuscript or its authors until this week, and I got excited about it and wanted to share. 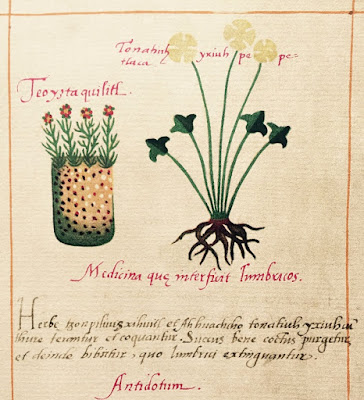