"Eight Can't Wait" is a menu of concrete police reforms that has been widely proposed, at least on Twitter. The reforms are aimed, not at the law, but at internal police department guidelines on the use of force. This means that they could be quickly adopted in many cities. This graphic has been making the rounds: 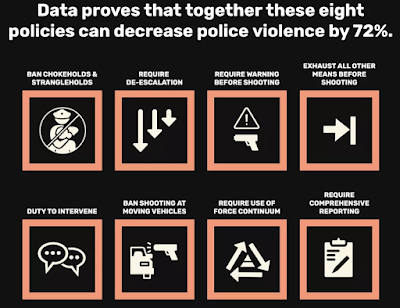 Most of these are self-explanatory, Matt Yglesias offers this description of the rest:


A comprehensive reporting requirement means that officers need to report each time they use force or threaten to use force against a civilian. A duty to intervene rule requires bystander officers to step in if a fellow officer is using excessive force and formally requires police officers to break the blue wall of silence and report such incidents to supervisors. The use of force continuum is a specific set of requirements governing what kinds of weapons can be used versus what levels of resistance. And a deescalation requirement mandates that officers try to secure their personal safety through distance and communication before resorting to force.

As to the evidence that these measures reduce police violence, well, there is some. But it is not iron-clad and it is all subject to a big confounder: maybe these measures are all meaningless in themselves but seem to work because they represent a leadership push to reduce violence somehow. So if they were adopted in the middle of a crisis to calm the situation, without any real commitment from city and police leaders to enforce them, they might not matter at all. Still, a leadership commitment has to be expressed in some concrete rule changes, and these are certainly worth looking at.
Posted by John at 10:32 AM

Both this post and your Camden one are very interesting. It seems to me an important aspect would be breaking the hold older officers have on younger officers. I imagine a lot of hostility to the community is transmitted in this way, with veterans telling rookies things like, "Forget what they told you in training. The civilian is not your friend. Your only friends now are the ones in blue," and so on. This may make disbanding and replacing whole departments necessary, in some cases.

I concur with David.