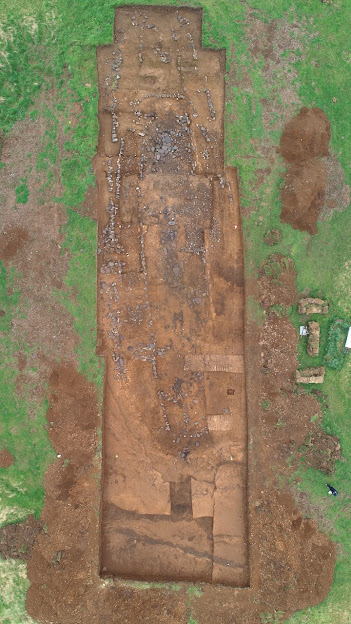 Work has continued at Stöð, a Norse site in eastern Iceland that I wrote about two years ago. This site was founded around 800 AD, 75 years before the famous first settlement of the island. The excavator of Stöð, Bjarni Einarsson, thinks the site was a seasonal camp, occupied by people who came from Norway to work a couple of months in the summer fishing and catching seals and then went home. Such camps are well known from northern Norway and a camp in Iceland makes perfect sense; after all, people wouldn't have loaded their families into ships and moved to Iceland without having good knowledge of the land.

The discoveries on the site now include two longhouses, one on top of the other, as shown in the photograph above. The larger one is 103 feet (31 m) long, the largest yet found in Iceland dating to before AD 1000. This is the earlier of the two, dating to around 800, so if this was a camp it was a large one sponsored by an important Jarl. Around AD 870 the larger house was torn down and a smaller one built on the same site; this might represent the transition from a large band of men staying seasonally to a farm occupied by one household.

This is quite remarkable, because first settlements have in general been very hard for archaeologists to find or verify: hardly anything has been found at the Roanoke Island settlement or the possible Viking sites in Canada, and as yet there is no trace of the Basque whalers who are known to have visited New England in the 1500s. To find such a rich, well-dated site that might be one of the first Viking settlements in Iceland is amazing.
Posted by John at 2:25 PM