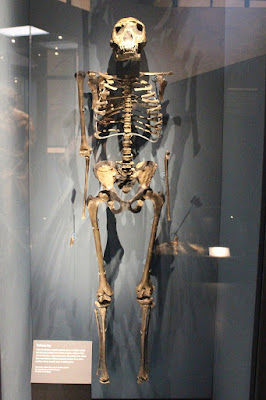 News comes from South African of what are claimed to be the oldest fossils of Homo erectus, dated to between 1.95 and 2.04 million years ago. They were found in the same stratum as fossils of an older Australopithecus species, so the two species may have shared that landscape, but given that the time span on the dates is 100,000 years, that is far from certain. Anyway this gives us a chance to think for a moment about our first really successful ancestors. 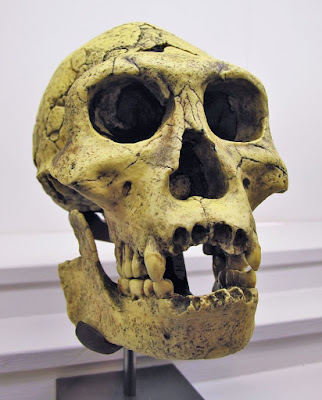 Homo erectus survived for around 1.5 million years, fading from the scene around 500,000 years ago. They are almost certainly the ancestors of us and all our close relatives (Neanderthals, Denisovans). They were first discovered in East Asia (Java Man, Peking Man) and only later in Africa, and while most anthropologists think they evolved in Africa that is not certain. They roamed very widely, from France to Indonesia to South Africa. They were not tied to any particular environment but could, like modern humans (or crows) adapt themselves to whatever place they found themselves in: jungles, plains, mountains, cold, hot, inland, on the shore. This was surely due to the vastly greater size of their brains, compared to hominins before them: the biggest Homo erectus brains measured around 1100 cc, about the same size as the smallest brains of normal modern humans. Their brains seem to have grown slowly over time, the average size increasing from around 850 in early specimens to 1000 in the later ones. 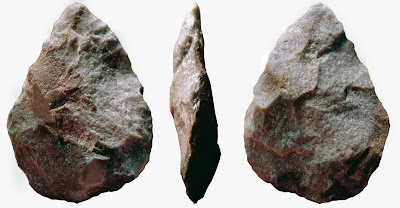 They walked much as we walk, leaving their hands free to carry tools. They shaped crude tools from stone, and presumably from other materials, although nothing but stone survives. 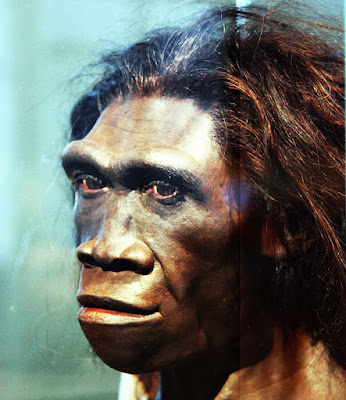 And they endured for 1.5 million years. Compared to the span of our civilizations it is a vast stretch of time, 60,000 generations when beings something like us slowly, slowly developed the ways of life that still survive among hunter gatherers. All that time they were changing physically and surely in other ways as well. The crazy nomenclature that surrounds them (Homo ergaster, Homo georgicus, Homo yuanmaoensis) springs from attempts to understand the diversity of their kind, and some splitters still think we should be talking about several different species. 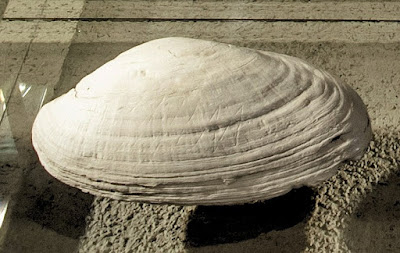 Shell from Java with incised lines, sometimes claimed to be the oldest work of art

We do not know if they had language, but some anthropologists think their skulls show they could make a range of sounds as wide as ours. Recently genetic studies have suggested that the FOXP2 gene, which we know to be essential for language in us, probably evolved by a million years ago. So the early stirrings of our kind's astonishing invention probably took place among them. Since the bones of large animals have been found around their camps, they probably hunted in coordinated groups, and language would come in handy for that. After all they were not bigger or stronger than us, but on the contrary a little smaller and weaker, less able to strong-arm their way through life. Another advantage they may have had: studies of their shoulders suggest they were first species that could throw a spear with deadly effect. 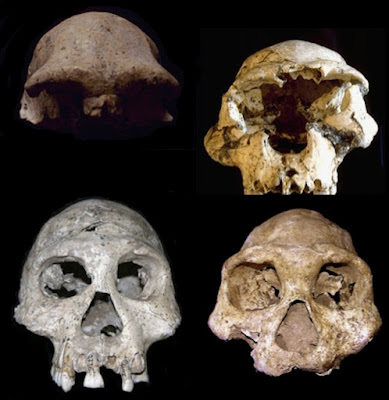 We also do not know if they could control fire, but there is pretty good evidence that they were doing so by 750,000 years ago. That would make them pioneers of another great human advance.

They developed the way of life that defines us, using their big brains and clever hands to negotiate the world. They were smart and adaptable enough to survive through Ice Ages and hot times, across vast areas populated by beasts much larger and stronger than themselves. 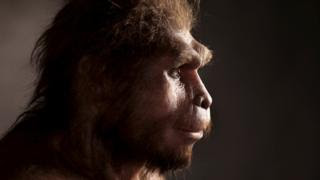 Unfortunately their imaginations are closed to us, so we do not know, and probably never will, if they had stories and names. They lived too long ago for us to ever really understand them. We can only look at their bones, and wonder.
Posted by John at 8:54 AM