A Short Tour of Historic Britanny: Quiberon to Paimpont 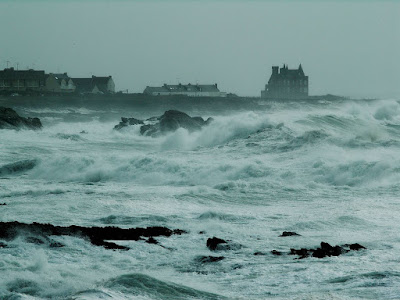 Our tour begins on the south coast at Quiberon, a rocky peninsula overlooking a bay of the same name. Here on 20 November 1759 was fought one of the most decisive battles in the history of North America, called by the French le Bataille des Cardinaux and by the British the Battle of Quiberon Bay. The French navy was trying to rendezvous with a fleet of transport ships that had been collected at Quiberon to transport a French army to Scotland. Both navies had been scattered by a fierce three-day storm, and on the 20th the wind was still blowing a gale. The French admiral, Marshal de Conflans, thought that in those conditions he could slip into Quiberon unopposed. But Sir Edward Hawke learned of the French moves and brought his force of 24 ships of the line flying into the bay with the gale behind them, sinking six French ships of the line and driving several others into the harbor where they grounded. This ended the threat of any French invasion of England and gave the British naval superiority in the Atlantic, which they used to conquer Canada. 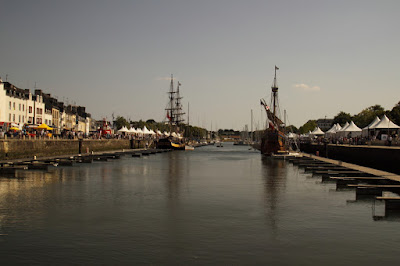 We come ashore at Vannes, the capital of the Morbihan Department and the largest city hereabouts. The harbor has been in use since the Iron Age; its name comes from the Veneti, a maritime Celtic nation conquered by Caesar. 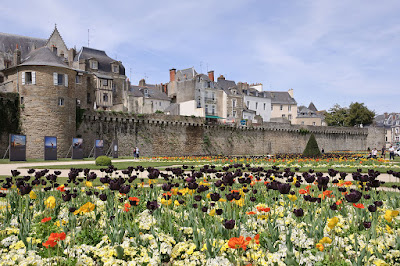 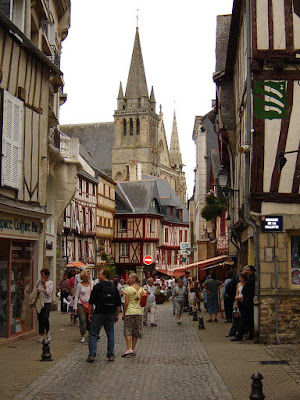 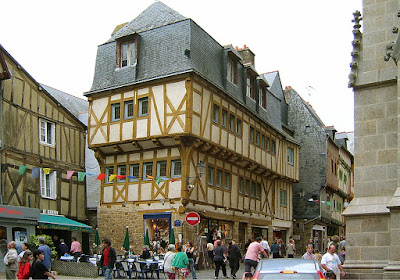 Parts of the medieval walls still stand, and the central city boasts dozens of buildings dating to the 1600s. 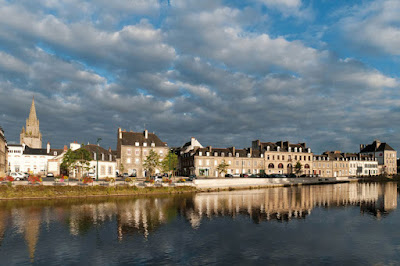 In Vannes we rent a car and drive northwest to Pontivy, on the River Blavet. 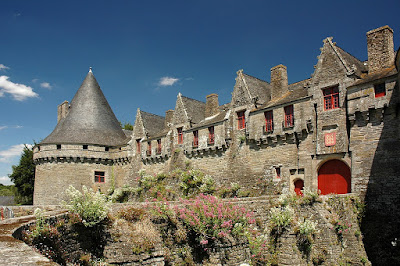 Pontivy was the seat of the Dukes of Rohan, a great noble clan who traced their line back to a possibly legendary dark-age Breton chieftain named Conan Meriadoc. 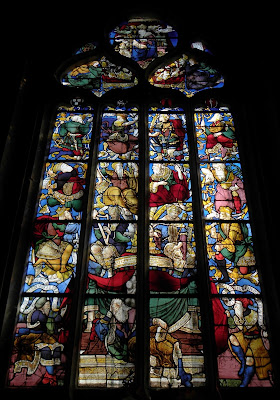 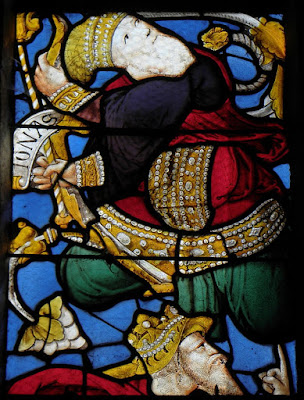 St. Meriadoc, supposed to have been his relation Conan Meriadoc's confessor, in the local church. 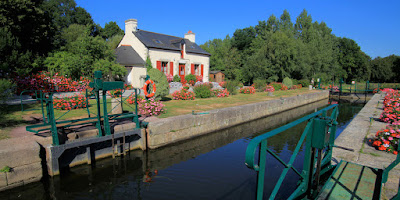 Leaving Pontivy we cross the Nantes-Brest Canal, a monument that interests me because its history so closely parallels the Chesapeake and Ohio Canal where I have done much wonderful archaeology. The Nantes-Brest Canal was first proposed in the 16th century, because navigation around Brittany's coasts is so often interrupted by deadly storms. A false start was made in 1783, almost exactly when George Washington proposed his Patowmack Canal. Construction of the Breton canal actually got under way in 1811, but it was not finished until 1858, by which time the railroads had already taken over the inland freight business. Like the C&O, it finally found success in recent times as a route for pleasure boaters, cyclists, and walkers. 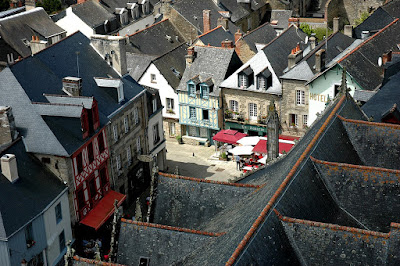 We drive east to Josselin, a charming little town on the River L'Oust. 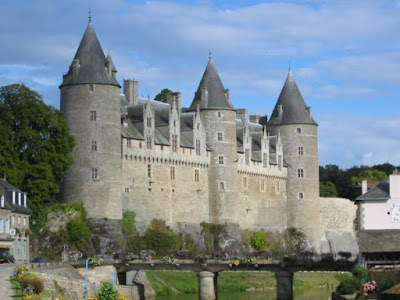 The riverfront is dominated by the Chateau Josselin, another castle built by the Dukes of Rohan and then "restored" by their descendants in the 19th century. 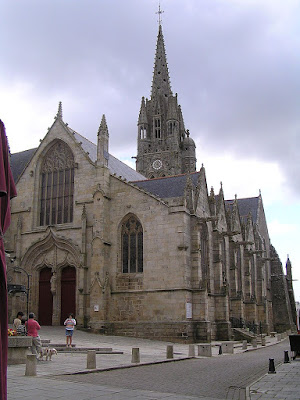 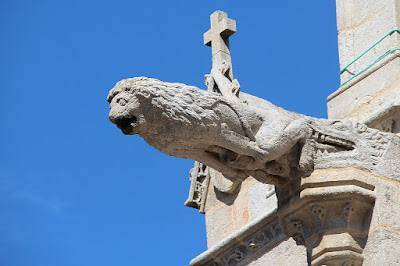 There is also a charming little gothic church, covered with sculpture. 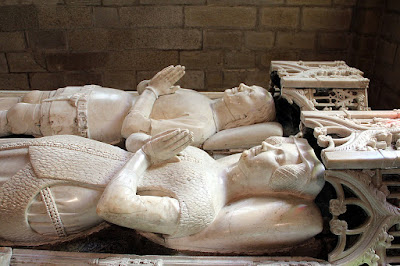 Inside are tombs of the Rohan family. 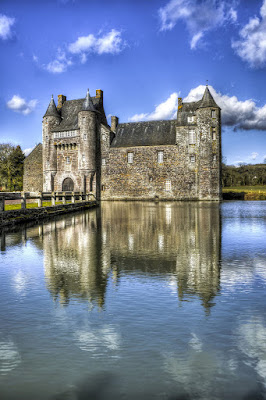 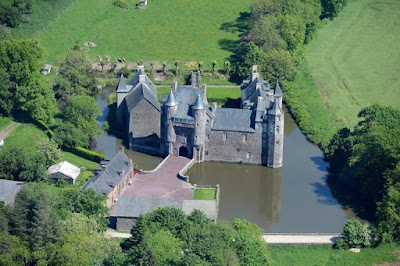 Not far from Josselin is Trécesson, a delightful and quite authentic castle. The spot was already fortified in the 8th century, and the knight Jean de Trécesson is recorded living here by 1250. The current castle was built in the 1400s. It is currently the residence of the countess de Prunelé. 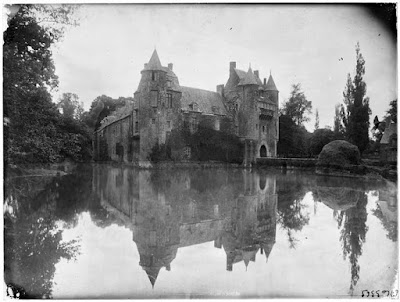 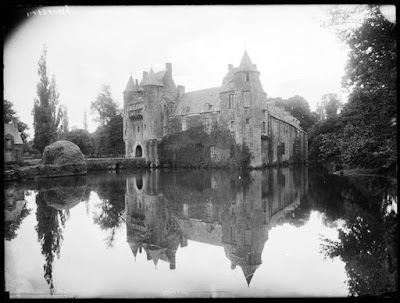 In 1793 the Girondist deputy Jacques Defermon signed a protest against the exclusion of the Gironde faction, the event often said to mark the beginning of the Terror. Defermon had to flee Paris and hid at Trécesson until Robespierre was overthrown. These pictures come from a set taken in the 1950s by the French government before modern restoration began. 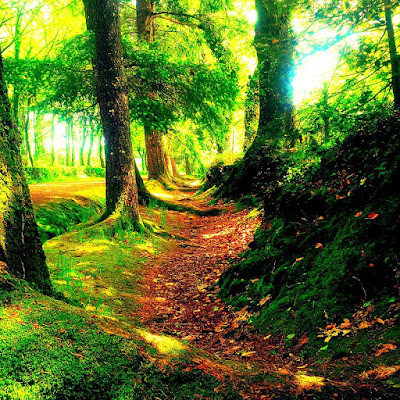 From Trécesson we head northeast into the interior of Brittany, formerly a lightly settled land where the boundaries of duchies and departments dissolved into the dense forests. This was once a country of wood cutters, charcoal burners, iron forgers, outlaws, and Arthurian legends. It is here that most authorities place the Forest of Brocéliande, famous in Arthurian lore. The largest remnant is now called the Forest of Paimpont. 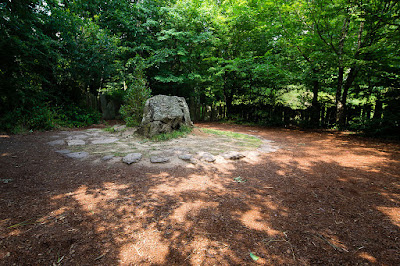 When Rome withdrew from Britain and the Anglo-Saxon invasion began, thousands of people from Cornwall and Wales crossed the channel and settled in the  land that came to be named for them. It fascinates me that they brought their legends with them and attached them to the new lands. There are in Brittany at least two Tombs of Merlin (one is above), several places allegedly associated with Arthur, and others said to be the dwellings of faeries. 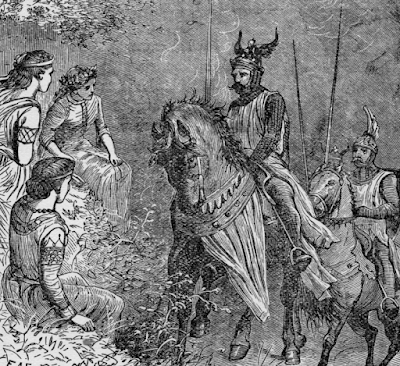 The association of central Brittany with magic and legend goes back at least to 1160 when the poet Wace wrote a history of the Dukes of Normandy. He says that after hearing these stories he traveled to the region. Alas, 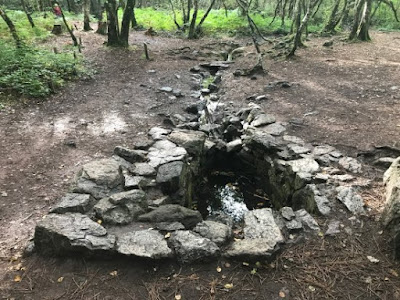 But that didn't stop the great Arthurian Chrétien de Troyes (c. 1135-1185) from setting his romances in Brocéliande. Among the famous spots he mentioned was the Fontaine de Barenton (fontaine here meaning "spring"), where pouring water from the pool onto a flat rock nearby brought forth a Black Knight to battle the intrepid water pourer. 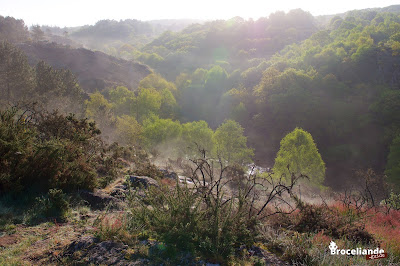 This is the place now identified as the Valley of No Return, where Morgan le Fay imprisoned many of Arthur's knights. 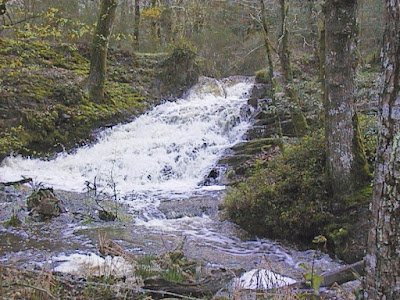 We can wander in the forest as long as we wish, dreaming. But sadly like Wace we will probably find no faeries or giants; on a more positive note, no angry knights will emerge to battle us, and the scenery is lovely. 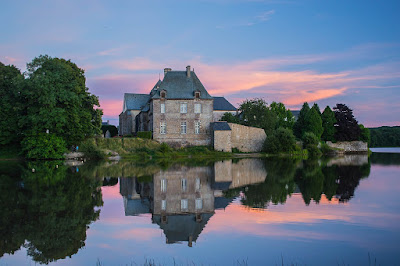 On the other side of the forest we arrive at the little town of Paimpont, and so to the end of this journey.
Posted by John at 4:51 PM

"The harbor has been in use since the Iron Age; its name comes from the Veneti, a maritime Celtic nation conquered by Caesar."

The usage of "Veneti" caught my attention, since I half-remembered it being the term for residents of the Veneto region of Italy, so I looked it up.

This is one of those bizarre coincidences of language and history: there are at least FOUR different groups of people who were (or are currently) known as the Veneti, and apparantly ALL of them were maritime cultures in Western Europe, ALL of them apparently derive their names from the same shared Proto-Indo-European root, and ALL of them had their histories shaped to a drastic degree by interactions with the Roman and/or Byzantine Empire, which itself took note of and recorded them in turn.

That's about as weird as the total coincidence of European explorers giving the name "Mosquito Coast" to a region of Central America which was (and is) home to the Miskito people, naming it not for the native people (with whom there was little to no initial contact), but for the native insects - the name of which derives from the Spanish for "little fly", a term which was already employed in Europe at the time, but which referred to more ordinary flies which do NOT feed on blood, since mosquitos as we know them are not native to Europe and did not exist there at the time.