American Indians Disappearing from the Culture 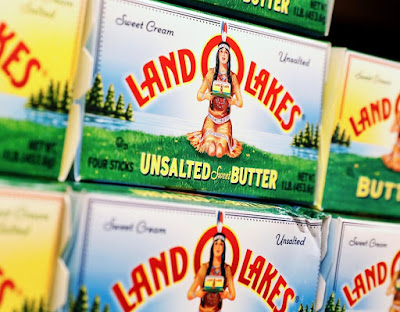 From John Smith's Discoverie of Virginia to around 1970,  American Indians were central to Euro-American popular culture. Stories, visual art, advertising, songs – all of it was saturated with images of Native Americans. Until 1890 or so that was because Indians were central to American life. Defeating them, taking their land, and getting along with the survivors was a big part of our national project. But even during the war years the picture of Native Americans in Euro-American culture was not all negative; on the contrary there was from the 1600s on a romanticizing of "wild" Indians as noble, stoic, and wise. Wars against Indians were always opposed by a significant faction of whites, however ineffectual that opposition may have been. Conflict did not prevent Euro-Americans from taking over much of Native culture, from eating corn to smoking tobacco.

But from around 1890 Native Americans ceased to be major players in American politics, and Indian issues faded from the news. They remained, however, very large in our culture and especially in movies and television.

A Native boy growing up in the 1950s saw his ancestors on television almost every night. Maybe they were portrayed as savage barbarians, but they were certainly not pathetic; on the contrary they were badasses fighting hard for their land, and white people feared them. I remember a scene in which John Wayne points to a spear left behind by an Indian raid and says, "that's Comanche," at which everyone gets very quiet. From The Searchers to stories of the first Thanksgiving, Indians were huge in American popular culture.

Now, not so much. This is partly because we are just not as interested in the past as we once were, and partly because of white shame that makes it hard to portray cowboys driving their cattle across Indian land as heroes. And partly because of pressure from Native America leaders to get rid of offensive, stereotypical images.

This is on my mind because Land O' Lakes has decided to remove the Indian woman from their butter. This does not seem to have been because of any particular campaign by Native Americans, but because they want to feature some of their farmers in their product design to emphasize that they are a farmer-owned cooperative. But it has been celebrated by some Native leaders:


Kevin Allis, the chief executive of the National Congress of American Indians, a public education and advocacy group, said the organization saw it as a “positive sign,” adding, “We encourage all companies that peddle products displaying stereotypical Native ‘themed’ imagery to follow suit.”

“Americans need to learn the truth about the beauty and diversity of tribal nations, peoples and cultures today,” he said, “and discarding antiquated symbols like this are a step in the right direction.”

I wonder if this is wise. Because once we get rid of all the offensive, stereotypical images of Indians, we are not going to be left with sensitive, nuanced images of beauty and diversity. What's going to happen is that Indians will disappear. Or, I guess, that their prominence in the culture will fall until it matches their share in the population, which is around 1.5%.

I do understand that in some cases nothing would be better than the offense offered by the culture, for example I think African Americans are right to fight minstrel show mockery of black people. But I think the situations of Native and African Americans are very different. The old stereotypes made African Americans laughable, while those of Native Americans made them violent and savage but on the other hand formidable and sometimes wise. There is in the old stereotypes of Indians much that is true – the Iroquois and the Lakota were very violent, and proud of it – and on the other hand much that matches the ways contemporary Native Americans want to be understood, especially in their spirituality and their attachment to the earth of their homes. It seems to me that there is much in the popular culture that Native leaders could work with in building a real understanding of their peoples. Plus there is the stark demographic fact that there are ten times as many African Americans as Native Americans, which makes them a lot harder to ignore.

So I wonder if the cause of Native American rights would really be helped by the disappearance of Indians from all sports team names, advertising, bad movies, corny tv shows, and so on. At least those things keep Indians in the public mind, and at their worst give Native leaders a chance to protest them and be heard.

The Land O' Lakes woman also raises another question: what bits of culture would meet the standards of Indian activists like Kevin Allis? It happens all the time that a big corporation will consult with some members of an ethnic group and hire people of that ethnicity and so on and still get accused stereotyping and cultural appropriation (like Disney with Moana). Because the Land O' Lakes image is not, it turns out, the random product of American advertising, but was created by a Native American artist who tried to make it specific to the Indian nations of Minnesota:


The original logo of the company’s “butter maiden” first appeared on Land O’Lakes packaging in 1928, created by Arthur C. Hanson, an artist who worked for a local advertising firm.

It was redone about 30 years later by Patrick DesJarlait, a Chippewa artist who died in 1972. As a Native American, he was a rarity in the illustration business at the time, his son Robert DesJarlait said in an interview on Friday.

“He redid her features and the dress she is wearing, a Plains-style dress with beaded panels,” said Mr. DesJarlait, a member of the Red Lake Ojibwe tribe in Minnesota. “He added floral designs for the Chippewa culture. It was basically a redesign. He gave her a clearer image. So he was modernizing her a bit.”

Though some groups have held up the illustration as an example of stereotyping, Mr. DesJarlait said, he didn’t see it that way. “She was never created as a stereotype,” he said.

Mr. DesJarlait said he believed that the company did not discard the imagery to get rid of a stereotype, but out of discomfort with representations of Native Americans of any kind.
“She just disappeared,” he said.