The Palace of Ashurnasirpal II at Nimrud 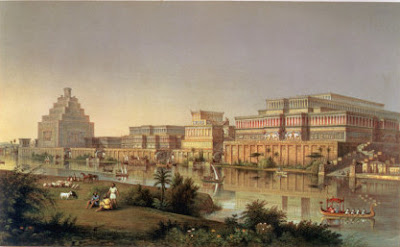 Ashurnansirpal II was one of the great rulers of the second or Neo-Assyrian Empire. He reigned from 883-859 BCE. After conquering central Anatolia, Syria, and Elam, he built an enormous palace at Nimrud, which was excavated in 1845-1847 by Austen Henry Layard. The walls of the palace were made mainly of mud brick, lined with sculptured stone panels. This reconstruction of the palace exterior was made by James Ferguson in 1853, based on Layard's work. 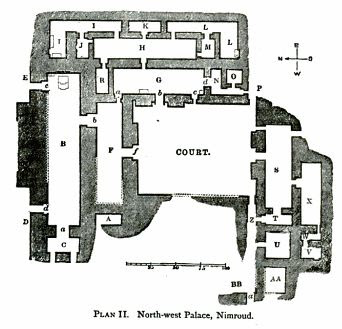 Layard's plan of the NW Palace at Nimrud, from Nineveh and its Remains. 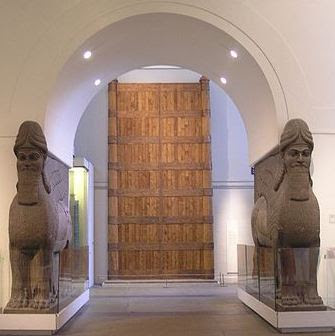 Reconstructed gate from Nimrud, in the British Museum. 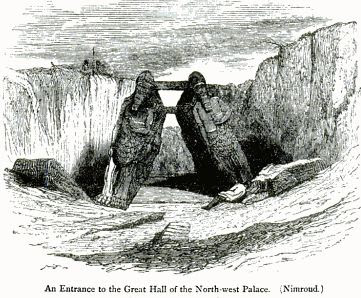 Layard's drawing of the gate under excavation. 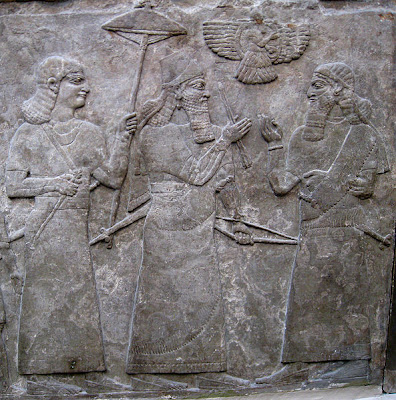 The collection of sculpture from Nimrud was so vast that it is scattered around the world in a dozen museums, including the British Museum, the Metropolitan in New York, the Oriental Institute in Chicago, and the MFA in Boston. Above is a depiction of Ashurnasirpal himself, meeting with officials as a protective spirit hovers overhead. 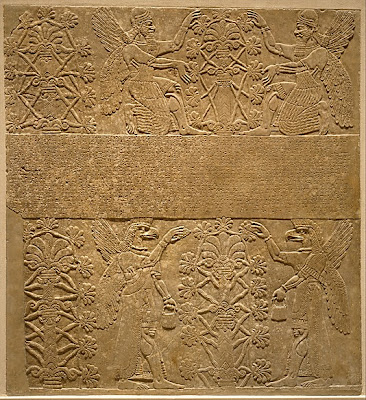 Besides the sculptures, the palace was carved with a long inscription describing Ashurnasirpal's deeds, including the construction of the palace.


The former city of Kalhu [Nimrud], which Shalmaneser king of Assyria, a prince who preceded me, had built, that city had fallen into ruins and lay deserted. That city I built anew, I took the peoples whom my hand had conquered from the lands which I subjugated, from the land of Suhi, from the land of Laqe, from the city of Sirqu on the other side of the Euphrates, from the furthest extent of the land of Zamua, from Bit-Adini and the land of Hatte, and from Lubarna, king of the land of Patina, and made them settle there.

I removed the ancient mound and dug down to the water level. I sank the foundations 120 brick courses deep. A palace with halls of cedar, cypress, juniper, box-wood, meskannu-wood, terebinth and tamarisk, I founded as my royal residence for my lordly pleasure for ever.

Creatures of the mountains and seas I fashioned in white limestone and alabaster, and set them up at its gates. I adorned it, and made it glorious, and set ornamental knobs of bronze all around it. I fixed doors of cedar, cypress, juniper and meskannu-wood in its gates. I took in great quantities, and placed there, silver, gold, tin, bronze and iron, booty taken by my hands from the lands which I had conquered.

Other inscriptions describe the banquet he held to inaugurate the new palace:

When I inaugurated the palace at Calah I treated for ten days with food and drink 47074 persons, men and women, who were bid to come from across my entire country, [also] 5000 important persons, delegates from the country Suhu, from Hindana, Hattina, Hatti, Tyre, Sidon, Gurguma, Malida, Hubushka, Gilzana, Kuma [and] Musasir, [also] 16000 inhabitants of Calah from all ways of life, 1500 officials of all my palaces, altogether 69574 invited guests from all the [mentioned] countries including the people of Calah; I [furthermore] provided them with the means to clean and anoint themselves. I did them due honors and sent them back, healthy and happy, to their own countries. 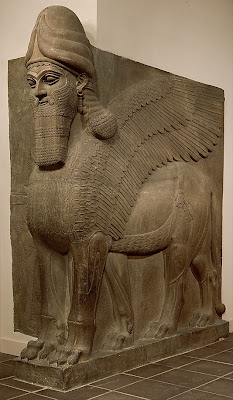 Gallery as displayed in the Metropolitan Museum, New York, and one of the winged bulls. 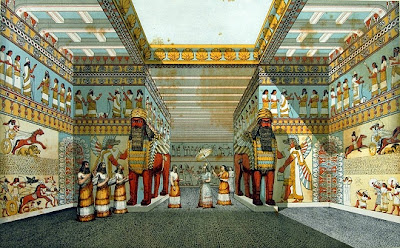 Reconstruction of the interior of one of the main galleries; all of the sculptures and reliefs were once brightly painted. 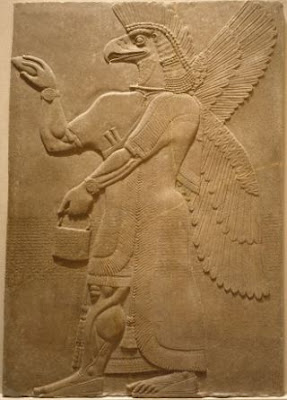 Ashurnasirpal II might be most famous for the outrageous savagery of his wars, about which he boasted in his own inscriptions:


I am Ashurnasirpal, the celebrated prince, who reveres the great gods, the fierce dragon, conqueror of the cities and mountains to their furthest extent, king of rulers who has tamed the stiff-necked peoples, who is crowned with splendor, who is not afraid of battle, the merciless champion who shakes resistance, the glorious king, the shepherd, the protection of the whole world, the king, the word of whose mouth destroys mountains and seas, who by his lordly attack has forced fierce and merciless kings from the rising to the setting sun to acknowledge one rule. . . . 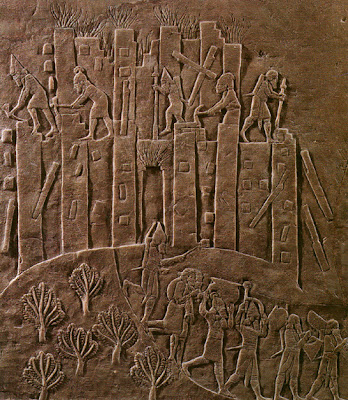 Many of the captives I have taken and burned in a fire. Many I took. alive from some I cut off their hands to the wrists, from others I cut off their noses, ears and fingers; I put out the eyes of many of the soldiers. I burned their young men women and children to death. . . . I flayed the nobles as many as rebelled and spread their skins out on the piles of their corpses.

When he wasn't fighting wars, Ashurnasirpal was hunting; he claimed to have killed 450 lions.

The glory days of Assyrian archaeology were brief. The work of exposing the palaces and removing the sculptures began in earnest in 1844, and by 1855 it was finished:


After Layard had left for London in 1851, Rassam continued to dig at Nineveh. In 1853, he discovered the palace of Ashurbanipal (r. 668–627 B.C.), which furnished the British Museum with some of the finest sculptured slabs. Meanwhile, the French worked at Khorsabad under Victor Place (1818–1875) until 1855. After that date, however, despite increased archaeological work in the region, no more large palaces with sculptured reliefs were discovered. Although the world of Assyria continues to be revealed through spectacular finds (for example, the discovery of royal tombs at Nimrud by Iraqi archaeologists in 1988–89), none can match the dramatic, romantic discoveries of the earlier generation. 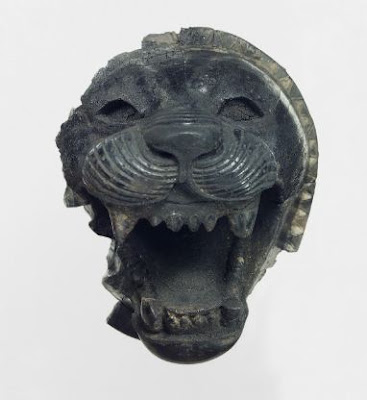 i've always liked assyrian style. thanks for sharing this.