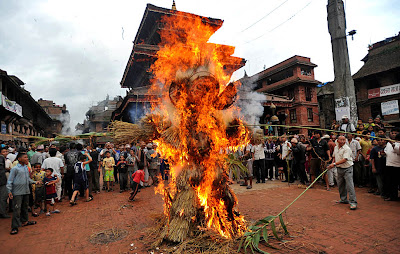 
This festival celebrates the exorcism of the mythical demon Ghantakarna. According to a local legend a savage by the name of Ghantakarna used to terrify the public by stealing their children and womenfolk. The demon made a grotesque sight with his body painted in red, blue, and black. He had a pair of bells on his ears so that, at every moment, he made a jangling noise. Because of these bells, he was called Ghanta (bell) Karna (ears). Ghanta Karna was a big bully and demanded money and other gifts be made to him by the villagers.

The rains came and went, but the farmers dared not to go out in fear of the ogre. There was a look of desolation on every farmer's face. But, succor came unexpectedly. A large number of frogs came to the place where the fearsome demon was staying and all of them started to croak. Ghantakarna got very agitated and tried to catch the frogs. But the clever frogs jumped ahead and continued to croak. They led him on to a swamp and then they jumped into the water. He too plunged into the water and was soon upto his ears in the mud. The frogs then swarmed all around his head and the demon sank to his death. Thus, the clever frogs were able to free the residents of the Valley from the tortures of Ghantakarna. 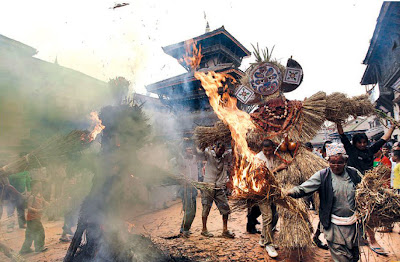 The festival of Gathemangal is celebrated towards the end of the Nepalese month of Shrawan. The festival is celebrated by acting out the legendary drama in the streets. To begin with, children from every neighborhood collect money from passerby, which is then used to make an effigy of the demon. While this effigy remains in the center of a rough tent-like structure erected from bamboo poles, one man impersonates Ghantakarna by smearing himself with paint and roaming the streets with a begging bowl asking for donations. At the end of the day, the person imitating Ghantakarna is placed on the bamboo poles, now taken down, and is dragged to a nearby river. This colorful festival, though celebrated mostly only in the Newar community, is especially fun-filled for children. They run around the effigy laughing gaily and enjoying them thoroughly. 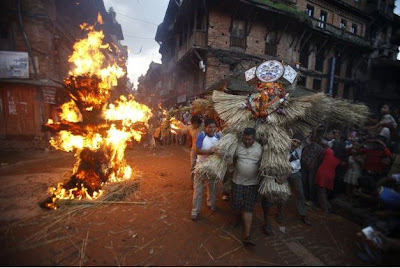 Gathemangal was celebrated on July 17 this year. Most of the pictures online show people burning the effigies, rather than drowning, so I bet there is more than one version of how the demon was defeated.
Posted by John at 7:20 PM