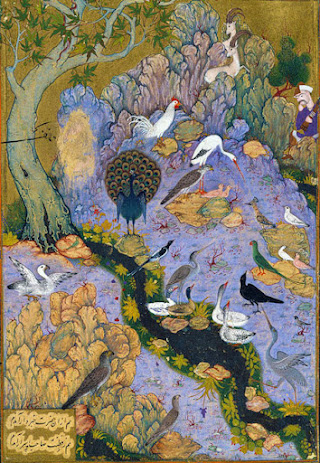 Parliament of Birds from a 16th-Century Persian Manuscript

Here's something I did not know about, British ceramics with patterns based on fossils, from the 1760s.

LA Times story on the feral pig menace in California. I did not know that feral pigs have killed five Americans since 1825.

At Uruk, one of the world's oldest cities, archaeologists unearth a 4,000-year-old boat made of reeds coated with bitumen (unrefined tar).

In some industries, companies can now hire robots by the hour instead of buying them. "I’m paying $10 to $12 an hour for a robot that is replacing a position that I was paying $15 to $18 plus fringe benefits."

New genetic evidence suggests that the leadership of the Avars, who dominated Hungary and the surrounding area in the 6th-8th centuries, migrated from Mongolia just a few years before their empire appears in the historical record. The rest of the population seems highly mixed.

Ohio appeals courts upholds $30 million verdict against Oberlin College for making false charges of racism against the owners of a bakery. To my mind this is a sordid tale with sins on both sides, besides being an act of class grievance by townsfolk against a rich, uppity university, which is a very old story indeed. But the verdict is correct in that some Oberlin officials encouraged and participated in protests accusing the bakery of racism without trying to find out if the charges were true. Instead of acting as grownups and, I don't know, maybe talking to the bakers to hear their side of the story, they tried to out-radicalize their students. Another case of the desire to fight against our supposed enemies rather than solve our problems that I see as America's biggest problem.

After reading some of Serge Schmemann's recent reporting on Russia during the war, I was led to this excellent NY Times essay on "Havana Syndrome." Schmemann got his start as a reporter in the Soviet Union and he developed physical and psychological symptoms because of stress and (largely justified) paranoia. That is his explanation of Havana Syndrome. He also points out that US government scientists deny the existence and practicality of the beam weapons supposed to be causing these problems. We used to blame weird health problems on demons or witches, but now we rely on pseudoscience.

And another photography contest, this one for storms.

Is this Bronze Age figurine from Germany an idol, a weight, or both?

David Brooks says that "globalization" in the old senses – trade, migration, interconnection, social and economic convergence – are fading, and the only thing globalizing now is the culture war. (NY Times)

Interesting map of Russia's initial plan in the Ukraine war. I've now seen several commentators base their idea of Russian plans on the positioning of the 1st Guards Tank Army, which has the reputation of being Russia's foremost armored formation. (Looks like they were place to cut across Ukraine and surround their forces fighting in the east.)

As of April 3, the Russians are losing tanks in Ukraine faster than the German lost tanks during the Battle of Kursk. (In 1943 the Germans lost about 500 tanks in in 49 days; Russia has lost more than 410 tanks in 39 days. For those not up on this history, Kursk is usually regarded as a catastrophic defeat for Germany, with losses so high that they prevented the Germans from ever going on the offensive against the USSR again.)

Michael Kofman on whether Russia can find enough soldiers to finish the Ukraine war.

The Trump wing of the Republican Party is dead-set against intervention in Ukraine, and not interested in a fight with Putin.

Article about the air war based on an interview with a Ukrainian fighter pilot. More emphasis on both the experience of combat flying over the Donbas and training with the US as explanations for good Ukrainian performance.

Phillips O'Brien, a Professor of Strategic Studies, has a theory that battles aren't very important to wars, and what matters are production and communication. He explains how this applies to World War II here. And, he says, Russia is losing in Ukraine, not because they are being outfought, but because they cannot "operate the systems they would need to succeed." This seems to mean logistics and what the US calls "command and control." He says flat out that Russian equipment losses "are not sustainable."

NY Times article on the political opposition in Belarus and a certain mural that keeps being repainted, very long but interesting. One poll mentioned in western media found that only 4% of Belarussians want to join the war.

What you get when you let Google translate the work of this Russian nationalist is strange and brutal: "Denazification can only be carried out by the winner." And "Russia enters the fight with the west for the future of the world."

Comparing a tabletop wargaming exercise held before the invasion to the actual course of events as of March 2. And continuing the game a year into the future, reaching a 1915 scenario with both sides too depleted for offensive operations.

Anti-interventions on the left (Glenn Greenwald, Freddie DeBoer, etc.) and right (Patrick Deneen, Sohrab Ahmari, etc.) sign a letter urging de-escalation in Ukraine. Nothing wrong with that, but they portray Ukrainians as victims of an "attempt to bog down Moscow in a long, devastating insurgency," as if the West bullied them into fighting for their own independence. There is a will in some quarters to believe that every bad thing in the world has Washington's fingerprints on it.

Short video from the Russian city of Mikhaylovsk showing fresh graves decorated with military flags. Military funerals seem to be a Russian specialty.

US Secretary of State Blinken: "for every Russian tank in Ukraine, we have provided or will soon provide 10 anti-tank systems. . . it may take time,  but there is no scenario in which Ukraine does not win."

Dmitry Peskov, Putin's press secretary: "We have we have significant losses of troops. And it's it's it's a huge tragedy for us."

List of material given to Ukraine by the US.

A Jewish Ukrainian soldier speaks to a dead Buryat tankman who came to denazify him.

Once again some of the western press is dominated by gloom; I just saw a video titled "Why Russia Shifting to the East is Worse than You Think." I read an article yesterday that mentioned Russian troops "redeploying from their encirclement of Kyiv," even though they never came close to encircling Kyiv, accompanied by a map that showed Russian forces still advancing toward Odessa, when they have in fact been driven back 50 miles from that direction and may be withdrawing their whole force back over the Dnipro River. The notion that Russian forces that were just soundly beaten in one part of Ukraine will prove decisively victorious in a different part seems very odd to me. I expect a lot of horror to come, but I think Secretary Blinken was correct when he said their is no scenario in which Ukraine does not preserve its independence and most of its territory.  Meanwhile this Washington Post story quotes some analysts who think the Russian army is spent: "I just don’t see how, given the materiel constraints, they could hope to prosecute a long war with these large objectives, It’s just not sustainable. … They’ll run out of troops."

Speaking of which, Ukraine claims to have the bodies of 7,000 Russian troops in its morgues. (Washington Post)

That article on the Oberlin flap is extremely short and terse. I can't detect in it enough information to see sins on both sides. The bakery looks like an ordinary business defending itself. Have you previously read other material about this dispute? Did the shopowner call Mike Savage's radio show, or something?

There's scarcely more information about the university's actions. The appeals court vote was undivided, and the award big to my untrained eyes, so one can guess there's a reasonable case for large damages inflicted on the shop. Given the article's brevity, I don't see how one can go farther than that. If we're going to be peacemakers, isn't that the kind of caution that's necessary? Your rhetoric, however, indicates a certain presumption of vileness on the university's part. What's that about?

Pretty interesting analysis that the Ukraine was modeled on the 1968 Czech takeover, except this time the other guys shot back.

Relentless pessimism is a sign of cultural superiority, for some reason. It's always "worse than you think".

@David- The Chronicle of Higher Education covered the case at the time. The sins I see on both sides were: 1) the bakery owners did seem to have a particular obsession with theft by black students, which seemed kind of racist, since according to some students everybody stole there; and 2) the protesters, who included a couple of university officials, insisted that the particular black student accused by the bakery owners was innocent, making the charges against him pure racism, but he later pled guilty, which I think was key in the verdict. There was a lot of ugly rhetoric around the trial and extremely abusive things said by students and by somebody on the side of the bakery; maybe it wasn't the bakers themselves, I can't remember. The appeals court verdict was very narrow and legalistic, I think intentionally, because the politics around the trial were ugly all out of proportion to the actual dispute.

That averages out to around 0.025 deaths per year. Meaning the "feral pig menace" is dwarfed by the "vending machine menace", which kills an average of 13 people a year (up from only about 2 per year before 1995). [Although, to be fair, those are global numbers for vending machines compared to only American ones.]

"The Trump wing of the Republican Party is dead-set against intervention in Ukraine, and not interested in a fight with Putin."

There's a mountain of evidence now to suggest that virtually all the terrible things attributed to salt in one's diet aren't actually related to salt - in particular, the fact that a lot of the studies which originally maligned salt were paid for by people selling products full of fat and other actually harmful things.

WHY THE FERAL PIG MENACE IS WORSE THAN YOU THINK