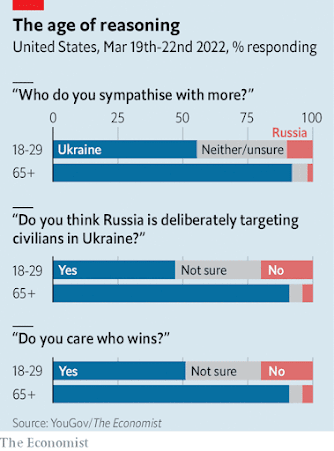 Interesting. I wonder what the influencing factors are.

Americans aged 18-29 were all born after the fall of the Soviet Union. That seems significant.

There's also the simple matter of who pays more attention to the news - not a lot of college kids spend their evenings reading the Associated Press, rather than drinking until they black out. And there's also the matter of where they get their news from - young generations that primarily get their news from social media are inherently more susceptible to misinformation campaigns.

I also wonder how much wiggle room exists in the "not sure" category, and whether there's some sort of generational factor leading young people to hedge their statements more, and to err on the side of caution. It certainly fits my experiences that older generations exhibit much more certainty in their opinions and views, even sometimes when they logically shouldn't.

And I also wonder about who The Economist is polling, and how representative their numbers actually are. They themselves state the polls were conducted over three days, so presumably they have a relatively small pool of respondents, which is something that can easily exaggerate statistical deviances. If you flip a coin ten thousand times, you're unlikely to get results that stray very far from a 50 / 50 ratio, but if you only flip a coin 10 times you can easily arrive at a very misleading 30/70 ratio just through the oddities of chance.

Also, are they able to correct for selection bias? Compared to 65+ retirees with little to do all day, how many people aged 18-29 are going to answer the phone and or open an email and agree to take an opinion poll? And is there some personality or political affiliation factor that is common to such people which would then influenced their responses?

All of this is to say I'd like to see more and more comprehensive data on this.