Purple Martins at the Nashville Symphony 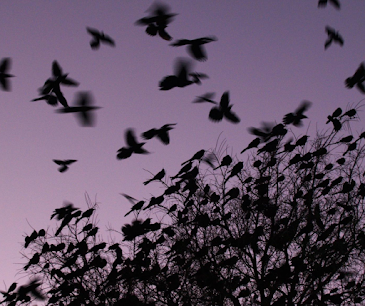 Like several other species of birds, purple martins return to North America in the spring with mating on their minds. So they disperse to nesting sites to raise their babies, living in pairs or in small colonies of up to a dozen nests. Then in the summer or early fall, the babies raised, they gather together into huge migratory flocks. These flocks hang together until time for the fall migration southward. Sometimes they wander around, but other times they pick one spot to be their collective home until time to push off. 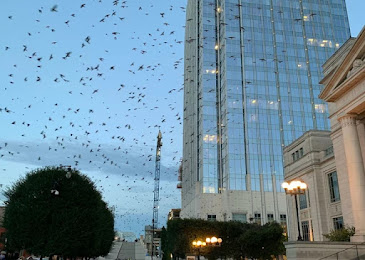 Over the past few years a congregation of 150,000 purple martins have made the Nashville Symphony their summer home. They roost every night in a stand of mature elm trees next to the symphony's concert hall. When the first huge flock showed up, in 2020, people were excited; here's a news story from that year titled "Purple Martins Delight Downtown Nashville." But birds do what birds do, and 150,000 birds do a lot of it. The Tennessee Wildlife Foundation launched a fund to help and raised more than $25,000 to clean up the mess and otherwise "keep the migration safe." (Video here)

But the birds seem to find the concert hall to their liking, and they came back again in 2021. Over two years the symphony has spent more than $100,000 cleaning up droppings, at a time when the pandemic has it near bankruptcy anyway. On some nights concert-goers have to pass through a rain of droppings to reach the front doors; there are pictures of people using umbrellas. The birds are also damaging, or some say slowly killing, the elm trees.

So the symphony just announced that they are going to pre-empt the birds' return by cutting down the 41 trees where they have been roosting. Margaret Renkl, the "southern culture" writer at the NY Times, investigated the resulting uproar. The tree people are outraged at the loss of mature trees from a city that, they say, doesn't have enough, and they also ask the reasonable question of whether we will keep cutting down any trees the birds choose to roost in until downtown Nashville doesn't have any suitable groves left. They proposed covering the trees with netting instead. But the bird people countered that this would be even more stressful for the birds than removing the trees, and they summoned images of hundreds of poor martins tangled in the huge nets. And of course the symphony is worried about any sort of bad publicity; what symphony can afford to alienate either bird lovers or tree lovers?

As Renkl points out, the birds probably started summering at the symphony because the trees they used to summer in were cut down for development, which happens every day in booming Nashville, and if they lose the trees by the symphony they will have to find a new home. There is no simple solution to the problems that result when people and wildlife make their homes together.

Has always amazed me how some animals adapt (and even thrive) to human civilization, while others are crowded out and even go extinct. Seems like the purple Martin is an adapter. Of course they are amateurs compared to the starling.

How can someone think about killing a tree because the droppings of birds? Why dont you plant more trees?

Really? The ONLY SOLUTION is to cut down the trees? There are over 100 bird experts in the US, consult all of them.