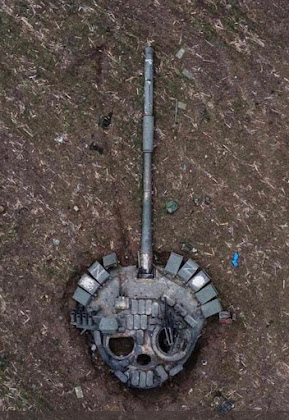 Osgüd Schläuter thinks poor Russian tank driving and combat performance means many Russian tanks have only two-person crews, rather than the standard three.

Dmitri, a Russian who has been Twitter's go-to translator of Russian and Ukrainian videos throughout the war, posts his thoughts on Russia; he says it is still a 19th-century imperial state, but he hopes this war will be the beginning of real change.

Russian military trains have been spotted headed west loaded with Soviet military equipment from the 1960s, like BTR-60 open topped armored personnel carriers and Grad-1 rocket launchers that can't hit a target the size of a football field. (When they were new; who knows what happens when you fire one after 20 years in storage.)

Russian diplomats deliver a note in Washington "warning that U.S. and NATO shipments of the 'most sensitive' weapons systems to Ukraine were 'adding fuel' to the conflict there and could bring 'unpredictable consequences.'" This led to more straight-up trolling from Washington: they handed a copy of the note to the Washington Post, in both Russian and English, then had their spokesman decline to comment on what this "sensitive diplomatic document" says.

And then an unnamed "senior diplomat" told the Post, "What the Russians are telling us privately is precisely what we’ve been telling the world publicly — that the massive amount of assistance that we’ve been providing our Ukrainian partners is proving extraordinarily effective." And then, separately, "nothing will keep us from aiding Ukraine."

Interesting thread on the response of Noam Chomsky and other leftists to Ukraine, by a Syrian: "They believe that Russia can't be imperialist. They think imperialism is what the US does—ergo, anti-imperialism is anti-Americanism."

Somebody called "Oaklandsocialist" lays it on "left denialists" who won't oppose the Russian invasion of Ukraine.

Interesting essay by a Russian staff colonel, said to have been written on February 3: "It is clear that we will now have not an easy battle, but a hard battle."

Photographs of the Moskva on fire; definitely hit by two missiles.

Russian defense minister says that they have destroyed 2,213 tanks in Ukraine, about five times as many as Ukraine ever had.

Timothy Snyder on how Russian lies in 2014 helped set the stage for the current war.

A hardcore Russian nationalist catalogs all the ways Russia is losing the war.

I think there's no question but that much of the hard left is more opposed to the power and actions of the US in particular than they are to war, military aggression, or atrocities as such. And their rhetoric can certainly be annoying. Melenchon in the recent French election was a perfect example of this sort of thing. But, his finger-wagging tone aside, it seems to me the terms Chomsky is proposing look like a Ukrainian victory. The Russian invasion would have been decisively repulsed, and the treaty itself would bind Russia to a recognition of Ukrainian sovereignty and independence. What's not to like? Maybe I'm missing something.

I'm definitely not saying the Ukrainians should be easygoing about any negotiations. If If I were Zelensky, I'd want to find my very own Le Duc Tho to head my negotiating team. And obviously I would NOT want the terms to include a statement by Zelensky along the lines of Chomsky's implied "Wow, Russia, you are so very big, we acknowledge reality and bow to you" or anything like that. But, like I said, tone aside, I don't see what's not to like.

Chomsky is proposing look like a Ukrainian victory. The Russian invasion would have been decisively repulsed, and the treaty itself would bind Russia to a recognition of Ukrainian sovereignty and independence. What's not to like? Maybe I'm missing something.

I think what you're missing is Chomsky is not running Russia. What makes your or Chumpsky think that Russia is going to agree to a recognition of Ukrainian sovereignty and independence? If they wanted that, they could have done it without an invasion. I'm going to go way out on a limb and say it's the last thing Putin wants.

>Chomsky is proposing look like a Ukrainian victory.
Which is why it's not very likely the Russians are going to accept it.

I'd certainly agree that Russia is unlikely to accept these terms, at least not without a lot more fighting and more failures on its part. But the impression of Chomsky I got was that he was directing his advice to Zelensky. As advice to Zelensky, it didn't seem bad to me (again, except for Chomsky's tone)--except that right now, as you say, there's not much likelihood that Russia will yield to such terms.

>As advice to Zelensky, it didn't seem bad to me

Just useless. Advice given in an atmosphere of fantasyland is useless. Why not just counsel Zelensky to make Russia sign a treaty that allows Ukraine full independence, ability to join NATO, full Russian reparations for war damages, and requiring Putin to broadcast an apology to the world? I don't see what's not to like.

The problem is that Chumpsy sees his advice as some viable option.

I think Chomsky's terms are not awful, but he presents those terms as an alternative to war, or so I read it. His tone is, "if only Ukraine would be reasonable, we could avoid all this bloodshed." He also seems very reluctant to condemn Putin and Russia.

Yes, as I said, Chomsky's tone is not admirable. He does also seem to put the onus on Zelensky, both to adopt the terms and to avoid war. As Anonymous says, I doubt Putin would accept these terms. Putin clearly started the war hoping to get much more, including reducing Ukraine to a satellite state, at best.

But I would say the terms themselves are better than not awful. What more do you think Ukraine should aim for?