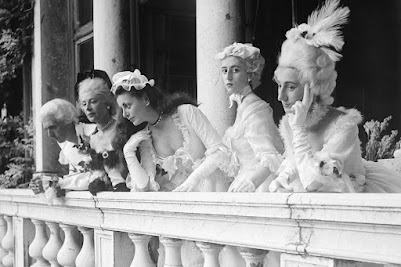 Ball of the century: in Venice, 1951 (above), an extraordinary social event in a time of harsh austerity.

So little is happening in sub-atomic physics that when one experiment at Fermilab found that the mass of the W boson is 0.1% off the prediction from the Standard Model, the experimenters said "the world is going to look different. . . . There has to be a paradigm shift." Sigh. People have been looking for an alternative to the Standard Model for 40 years with no success, so maybe this result will help but likely not.

The mysteries of politics in Pakistan, where no elected Prime Minister has ever finished a 5-year term in office. The latest, former cricket star Imran Khan, came into office as a reformer, but his party never had a majority and his more ambitious schemes, for example in health care, were thwarted by his coalition partners. He responded by increasingly angry rhetoric against his opponents and then against the US, which he claimed was scheming against him, besides shutting down opposition media and jailing several prominent critics. Now a no-confidence vote has tossed him out of office, but legally and without violence, so he can still lead his party in new elections whenever they are held. Honestly I do not understand how Pakistan functions at all.

In Japan, women with no groom in sight can dress up in a rented wedding dress for a "single wedding" photo shoot. Apparently some married women who just don't like their wedding photos have also paid for the service.

There is a story that starlings were introduced to North America by a man who wanted all the birds mentioned in Shakespeare to live here. Research shows that he did release 40 pairs of starlings in 1890-91, but could turn up no evidence that this had anything to do with Shakespeare, a "fact" first mentioned in 1948. (NY Times)

"No one knows how to build an AI system that accomplishes goals, that also is fine with you turning it off."

The case of the praying football coach is coming before the Supreme Court, and liberals are worried about what the new court will say about it.

So far, invasive pythons have been taking over the Everglades without much opposition. But footage from a camera set up to watch a python's nest showed a bobcat feasting on the eggs.

A guy on Twitter asks a profound question: "If the big task of the post cold war environment was the successful on-boarding of Russia and China into the global system... how did we screw it up so badly?" I am personally not sure the west "screwed up" China, but our advocacy of immediate privatization in Russia was an absolute disaster. "Shock therapy," we called it. The patient nearly died, then turned on his doctor.

Ten-minute video from the Getty about preserving an Egyptian mummy of the Roman period.

Interesting meditation on the Book of Job at Slate, Jewish and personal

Russia re-organizes its military structure in Ukraine, puts the Southern Military District in charge of the whole operation; this makes Army General Alexander Dvornikov commander of the invasion.

The Re-Taking of Nova Basan, fluffy but still interesting.

The Institute for the Study of War gives more detail on their pessimistic assessment of Russian combat power in Ukraine.

And Snyder on Russia's justification for genocide in Ukraine.

Phillips O'Brien on why Ukraine is winning (The Atlantic)

As of April 5, the BBC had been able to find the names of 1,083 Russian soldiers who had died in Ukraine, using funeral announcements; they note that funerals seem to take place two to three weeks after the deaths. Of the dead men, 217 are officers, including 10 colonels, 20 lieutenant colonels, 31 majors and 155 junior officers. Airborne troops and special forces are over-represented, and many officers are veterans with medals. In the short term these men are irreplaceable, and in the long term the cost to train their replacements will probably exceed the cost of all the material the Russians have left on the battlefield.

A report by the Times of London that Putin had purged more than 100 FSB officers has now been picked up by other western media. All of the agents worked in Section 5, which was set up to handle the territories of the former USSR. As of this morning (April 15) rumors of a similar purge of generals remain unconfirmed.

Narrative of the Battle at Hostomel Airport by Oryx, the guys who count destroyed vehicles. And speaking of those guys, their count of Russian tanks lost is now up to 506.

Ukrainian air defense officer tells the BBC about the challenges his men face, admits to taking heavy losses in the first few days of the war. I think the course of the air war can probably be best explained by assuming that both sides took heavy losses in the first few days. Seeing how fast they were losing aircraft, both sides radically cut back their flying hours and changed their tactics to reduce risk. The Russians decided that rather than try to destroy Ukrainian air defenses they would avoid them as much as possible.

Incidentally that Ukrainian air defense commander says Ukraine is shooting down around 50-70% of Russia's long-range missiles. Israel claims their Iron Dome system is more than 90% effective. Seems like ballistic missiles are not the unstoppable danger they once were, which explains all the interest in hypersonic cruise missiles.

More Russian diplomatic clumsiness: a column of construction vehicles appeared at the Polish cemetery in Smolensk, where the victims of the 1940 Katyn massacre are buried, threatening to destroy it. Somehow I doubt this will make Poles like Russians more.

CNN on the sinking of the Moskva. I remember back during the Cold War a lot of debate over Soviet ship design. Compared to US ships, Russian vessels were smaller, lighter, and carried more missiles. Some westerners feared their firepower but the US Navy said they would be easy to sink. Seems like the Moskva really turned out to be a glass canon, destroyed by one missile attack.

Coffee kiosks are back open in Kyiv.

Thread on how corruption might have doomed the Moskva, no idea if this is real or not.

Bobcats prey on venomous snakes too, so I wonder if they hunt young pythons.

Given that pythons are nonvenomous, I would anything of comparable size to the venomous snakes they already eat would be even easier prey.

But they only have a short time to do it - the invasive Burmese pythons are about 2 to 2 1/2 feet long at birth, and tend to be five to six feet long by their first birthday. Even then, they might still be suitable prey for bobcats - cats in general are known for hunting things substantially larger for themselves, and bobcats are pretty beefy.

But the numbers of bobcats out there aren't particularly high - and given that a single Burmese python female will lay one to three dozen eggs every year, the bobcats have their work cut out for them.

Agree with you, and about the numbers problem too. Jaguars hunt Anacondas, so I assume they would hunt Burmese pythons too, but I have no idea how many are left in the Everglades. Birds of prey should be another.

Florida Panthers, you mean? Jaguars haven't been in Florida since prehistoric times.

(Actual panthers haven't either, to be fair - the Florida "Panther" is just a subspecies of puma / cougar / mountain lion.)

Anywho, whatever you call the tawny furred big cats of Florida, there are only a few hundred of them in the entire state, so there's only so much they can do. Bobcats are much more numerous - there are quite literally about 1000x as many of them.

That Job meditation is very interesting.

I think I'm going back to bed. I read David's post above and went looking for a link to some guy who meditated at work.

"I am personally not sure the west "screwed up" China, but our advocacy of immediate privatization in Russia was an absolute disaster. "Shock therapy," we called it. The patient nearly died, then turned on his doctor."

Were those the same economists and ideologues who advocated for globalization. Everyone will benefit, and those few who lose jobs would find better ones. Just do it, they said.

I remember pundits wondering why we could produce the tools of war so quickly in 1940 but couldn't produce something as simple as masks in 2020. In 1940 the factories were in the U.S. In 2020 they weren't. Globalization. The working class rebellion in the U.S.? Globalization. Why the f*** is my job going overseas? And people wonder what happened to unions. Supply chain, anyone?

There's a class of economists who have done serious damage to countries.

Will google ever get around to giving us an edit feature?