Trees on Buildings and the Green Aesthetic 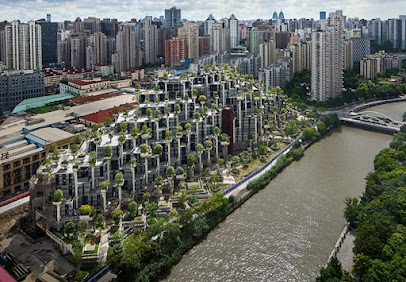 This is 1,000 Trees, a mixed use building in Shanghai by Heatherwick Studio. I think it is ok, aesthetically, certainly better than bare concrete and glass. Aesthetically, I like covering buildings with trees and vines. 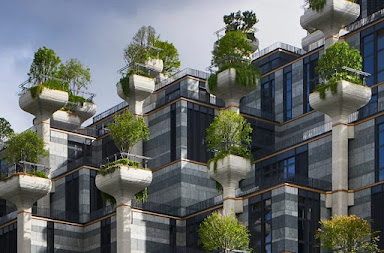 But this sort of design is not really eco-friendly. Consider the planters in which those thousand trees reside, each at the top of a tall concrete column:

Measuring from drawings, I estimate a typical planter and column top contains around 14 tonnes of reinforced concrete. Each kilogram of reinforced concrete releases 0.111 kilograms of carbon dioxide in its production . . . . A single planter would have an embodied carbon of 1,554 kilogrammes carbon dioxide equivalent (CO₂e). The amount of carbon dioxide a tree absorbs is dynamic, and depends on a variety of factors, but can be estimated as 10 kilogrammes per year for the first 20 years of its life.

This means the carbon dioxide absorbed by a tree would take around 155 years to offset that emitted in the production of the concrete planter.

Of course trees do more than just absorb CO₂, so that isn't the whole equation, but then again just building the planter does not represent the whole cost of the design. In defense of Heatherwick Studio, they don't claim that this building is "green." Which is good, because this building is not green at all, just trendy and expensive. 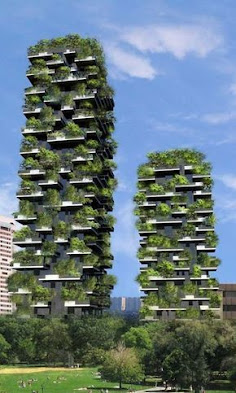 But plenty of other architects have evoked saving the planet in their designs for tree-covered towers, for example Milan's Bosco Verticale. I haven't seen calculations for these towers, but I am sure keeping trees alive up there costs a lot, and since the actual ecological impact of a thousand small trees is modest, I very much doubt it will offset just the number of extra elevator trips involved in tending the trees. These buildings are expressions of a post-industrial, "green" aesthetic, but they will not help the environment of Milan one bit.

Environmentalism is a mix of science, aesthetics, emotional revulsion against industry, attachment to small-scale communities, and so on. That's ok, everything big, important thing is complex. But if you really care about improving the health of ecosystems, you should defer to science, because a lot of stuff that looks or feels "green" is not.