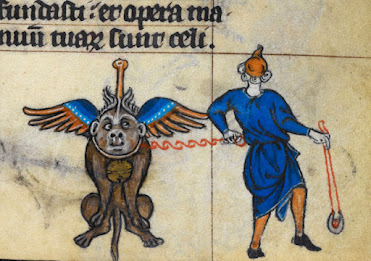 The Maastritcht Hours, c. 1300-25
Two mothers in their late 30s set American records in the marathon and half marathon last week, part of a trend toward top athletes staying at their peaks for much longer. (NY Times) The LA Lakers have a decent basketball team with three players over 35, including MVP candidate LeBron James at 37.

In Ireland, a dead man was "propped up by two other men in attempt to collect his pension at a post office." Sadly for their scheme, the post office employees were "immediately suspicious."

The world of TikTok "reality shifters," who claim to be able to enter other realities in their minds. I would call this "daydreaming," but I guess that doesn't sound as dramatic.

St. Hedwig and the Hedgehog in art and history.

Johannes Trithemius, the Renaissance historian and occultist who liked to invent authors and books and then cite them. This would be so much fun.

New genetic study says horses were domesticated in the west Eurasian steppe, that is, the homeland of the Indo-European peoples.

Review of the new David Graeber/David Wengrow book about human history over the very long term, doubling as an anarchist attack on state societies. In the way of these things they insist on going outside European civilization to find critics of "progress" and the hierarchical state – they call this the "Indigenous Critique" – ignoring that Europe had a great many of its own critics who hated hierarchy and state power as much as any Native American. In fact the only reason we know about most of the indigenous critiques they cite is that European authors who sympathized with them wrote them down. But Graeber's other big book, Debt, is eye opening, so I will probably read this one when I get a chance. Article here by Wengrow, based on the book.

The complex, hypocritical relationship between the US government and NSO, the Israeli firm that makes the Pegasus spy system that can crack the security of iPhones and Android devices. (New York Times)

And now Omicron BA-2, a new variant with minor changes from BA-1 that make it even more contagious.

Detailed post on the restoration of a Rubens painting at the Getty, very clear on what was done and how, with pictures.

Weekend at Berine's (in Ireland).

New genetic study says horses were domesticated in the west Eurasian steppe, that is, the homeland of the Indo-European peoples.

This feels like a confirmation of something that can be intuited.

Horses would only be domesticated in biomes where they naturally occur in sizeable numbers. Of those biomes, the ones where horses would produce the greatest benefits to humans are more likely to see humans invest the time, energy, and resources into domestication. Additionally, the prior presence of other kinds of animal domestication would further increase the likelihood.

The Eurasian Steppe simply works out as having the best odds. What other environment is better suited to promoting the domestication of horses?