Greek Paleogenetics and the Desire for Continuity

Across the world there are many societies that pride themselves on connections to their ancient past and hate it when archaeologists suggest that they are really the descendants of more recent immigrants: Japan, Ireland, India, etc. One of those places is Greece. Modern Greeks are constantly dreaming up new ways to connect themselves to the classical past, for example calling their officials Ephors or Archons. (Sometimes they do this in ways that make classicists laugh, for example when the flight school for the Greek Air Force was named the Icarus Academy.)

But are modern Greeks the descendants of classical Athenians and Spartans? After all a lot has happened in Greece since then: Celtic invasions, Alexander the Great and his empire, the Romans, the arrivals of the Slavs all across the Balkans, the Turks, the vast displacement of 1923, when Greece and Turkey exchanged a million people. The controversy over this began in the 19th century, when German and English visitors to Greece decided that the contemporary people did not look like ancient statues or act like classical nobles, so they must be Slavs or something. They were not very polite about this, which put Greek backs up against the wall.

Now another bunch of Greek geneticists is at it again, claiming that

The blogger at Eurogenes says he regarded this claim as so bizarre that he wasn't even going to comment on it, except that people keep asking him for his opinion. He offers this graph of what statisticians call the cline, the gradient of distance between numerical groups: 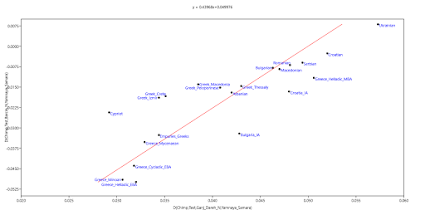 If you click on that to view it at a legible scale you can see that modern Greeks fall in between Bronze Age Greeks and south Slavs, but closer to modern Bulgarians than to anyone in the ancient world. Note also that some individuals fall a long way from the average, which is a sign of a mixed population. Our blogger thinks the way some modern Greeks are pulled toward Cyprus is significant, representing  migration from Cyprus or eastern Anatolia, perhaps in the Roman period.

The data is not really good enough to make percentile claims, but the simplest way to interpret this graph is to say that modern Greeks are a mix of ancient Greeks with immigrant groups, including Middle Easterners who came during the Roman or Byzantine Empire and medieval Slavs.

The degree to which some modern people, even archaeologists, get upset about these numbers just baffles me. The Japanese case is especially weird, since the genetics shows the Japanese people mostly  migrated to the islands more than 2,000 years ago. That isn't long enough for you?

But for some people it is not. They want to have emerged from a hole in the earth right where they now live – an actual claim made in court by Native American nations – and do not wish to hear about migrations or mixing. But human history pretty much *is* migration and mixing, along with conquest, plague, and sundry others breaks in continuity. Wishing for local roots that stretch back to the dawn of time will not make it so.