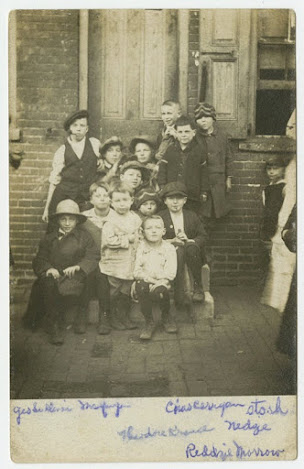 Sherlock Holmes had a regular force of detectives he once said could "find out anything". They were the Baker Street Irregulars, boys who spent their days hanging around on the streets of London, observing, who could be persuaded to follow people or look out for them for just a few cents. A splendid literary device, I thought, but not real.

But I am now listening to Young Stalin by Simon Sebag Montefiore (2008), a wonderful book about Josef Stalin before the Revolution. During the early 1900s Stalin headed the Bolshevik Party in Georgia, organizing demonstrations, strikes, terrorist acts, and bank robberies. And according to Montefiore, Stalin organized the boys of both Tbilisi and Batumi into gangs that spied for him; among other things he used the boys to keep watch on the adult Bolsheviks to make sure they were not secretly meeting with the police or skimming money from their criminal activities.

I guess cities used to be full of boys with not much to do and a lot of energy to burn off, who could be hired for spying and the like for a few cents of ice cream money. Too young to be sentenced to serious prison time, they were not likely to get any punishment from the police beyond a smack on the side of the head.

Come to think of it, some neighborhoods still are full of such boys who are still used that way by drug dealers, although I think these days they are a little older than the Philadelphia toughs in the picture at the top.

"I guess cities used to be full of boys with not much to do and a lot of energy to burn off, who could be hired for spying and the like for a few cents of ice cream money. Too young to be sentenced to serious prison time, they were not likely to get any punishment from the police beyond a smack on the side of the head."

Is this some sort of sick joke? Or do you actually think the street urchins of Tbilisi were spending any amount of money on ice cream, and were getting away with nothing more than smacks on the side of the head?

A huge number of urban kids lived in poverty, worked whatever jobs they could manage just to keep themselves (and often their families, if they had any) from starving or freezing to death in the winter, and if they had disposable income of their own left over, they likely spent it on cigarettes and alcohol, not ice cream - note the smoking pipe in that photograph you posted.

The police in many places around the world in the 1900s weren't known for their gentle handling of the public, but those in the Russian Empire were perhaps particularly brutal, especially toward ethnic or religious minorities and the poor.

The fact that street urchins themselves were a minor nuisance compared to terrorists and revolutionaries certainly afforded them some protection, but it wouldn't have escaped notice that such urchins were frequently employed by said terrorists and revolutionaries, and the police of the era would have had few qualms about liberally applying truncheons to said children for purposes ranging from extracting information from them about the men they work for; to "teaching them a lesson" and "putting them in their place" for getting in their way or causing problem; to simply seeing it as a way to amuse themselves by exercising power over the weak.

And the thing is, this isn't even an issue that has been consigned to the dustbins of history. Modern day Tbilisi (as in, right now, her in the year 2021) has a massive problem with homeless children, usually orphaned or otherwise separated from their families by war or poverty or both. They sleep in the streets, beg for charity, perform whatever work or petty crime they can or must to get by, routinely get beaten bloody by the police, and I can assure you they aren't going around buying ice cream.

...cripes, talk about being screamingly out of touch, both with the past and the present...

In Brazil the police were caught rounding up street children, murdering them and using mass graves for the bodies.
In the USA, there were the “child trains’ that took street children and sold/give them to families out west.
Australia was the dumping grounds for street children from England. I met a man who was a brutalized child sent to Australia’s outback at an “orphanage” which we would see as a Workhouse/Ranch.
This still goes on. Girls to brothels and boys to slavery. Children are a fungible commodity. The past is not past.
https://www.amnesty.org/download/Documents/192000/amr190051992en.pdf

Even very poor kids spend their money on stuff like candy and cigarettes. I have no idea if ice cream was a thing in the Tbilisi of 1904, but if it had been, kids would have spent their money on it. Poverty does not keep people from spending money on things that you find frivolous. I find that moralists are consistently outraged that poor people make such choices, but they do, in fact, do so, even if it means going hungry later.

The street children of Tbilisi in 1904 were, on average, richer in material goods than most of humanity has been. Their life expectancies were longer than those of medieval peasants. Even the European generations that experienced the worst loss of life from the world wars lived on average much longer than medieval people.

If you think the poor people of today, or Tbilisi in 1904, were poor in absolute material terms, you need to think harder about the past. The archaeological record of 19th-century slum dwellers is extravagant compared to that of ancient peasants or hunter gatherers. They had ten, twenty, maybe a hundred times more stuff.

This is not to say that their lives were not hard, or that they did not experience violence. But thanks to the Soviets we know a lot about the crimes of the Tsarist police, and randomly killing children was not one of them.

Here's my emotional gut response: talk to me when you've been homeless with no money and no idea where your next meal is going to come from, or on which day. I've been there, you're comfortably middle class and always have been, and you think you know better than I do what "poor" people spend their money on? As I said, out of touch.

Here's my more collected, less emotional response: the thing is, you're NOT wrong - "poor" people do buy ice cream, quite routinely! But for all of your talk of how much better modern people have it than their ancestors, you fail to recognize that "poor" is a massive spectrum, and that there's a difference between being poor and being a homeless orphaned child in a crowded urban hellhole.

I know you didn't mean to sound callous and out of touch, but whether or not you can appreciate and differentiate between the different degrees of human suffering that are out there, you still worded things badly - and worded them in a manner which I must confess -I- responded badly to. It came across as if you were romanticizing the really quite awful lives of fin de siècle "street urchins", effectively minimizing the tragedy of their situation.

And your subsequent defense of your position similarly rubs me the wrong way - it -seems- to argue that because things were worse in the distant past, we need not be revolted by the "lesser" evils of the recent past and the present, but can instead simply cheerfully imagine some lovable scamps and rascals out enjoying some refreshing ice cream after receiving a few "love taps" from the local police. I think you can appreciate why that suggestion, whether you meant to inspire it or not, might inspire some anger and resentment in a response.

I don't believe you meant ill - I just feel like you could have picked your words a little more carefully. (Just as I could have responded a bit more soberly and stoicly.)