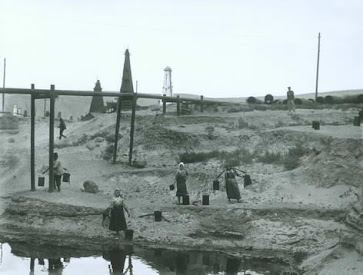 I'm still listening to Simon Momtefiore's marvelous Young Stalin (2008), and I was blown away by his description of Baku in the early 1900s. Baku, an old Persian town on the Caspian Sea, was one of those places where oil oozed naturally from the ground, and the inhabitants had long burned it for cooking and heating. Wells were drilled by the 1500s to get a purer, better burning product. Only a small amount was exported, by packing it in barrels. 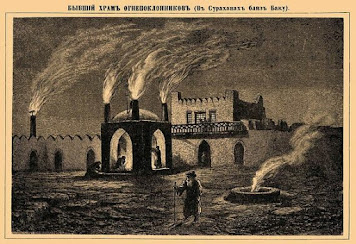 The oil was most famously used for the perpetual flame burning at an ancient Zoroastrian fire temple. (Which is still there, its fires still burning.) 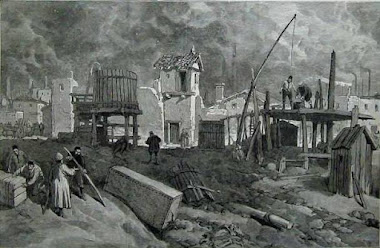 Things started to change after Baku was conquered by the Russian Empire in 1806. Baku was connected to a large part of Russia via the Volga River and a growing system of canals, and oil exports gradually increased. Baku changed from being an almost entirely Persian community to a multi-ethnic city, with large populations of Armenians, Jews, Russians, and others. 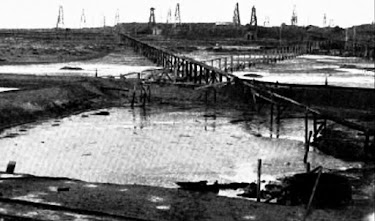 Oil production really took off in the 1870s, and this caught the eye of outside investors. In 1882 the Nobel brothers from Sweden founded an oil company called Branobel in Baku; in 1883 the Rothschild banking family opened their own Baku firm. The company that eventually became Royal Dutch Shell was also founded here. This grim photograph shows the Baku oil field in 1879. 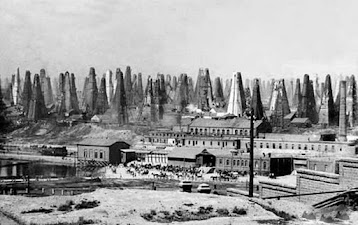 By the 1880s Baku had the look that Americans associate with an oil boom town, with a forest of wooden derricks. 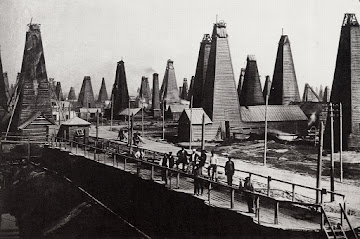 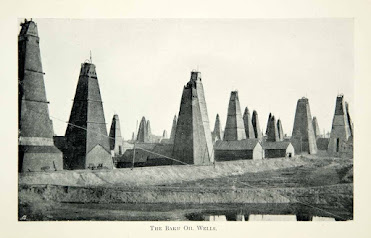 By 1900 Baku was world famous and there are hundreds of photographs. 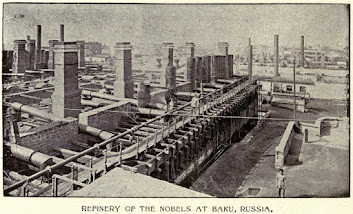 The Branobel refinery. The Nobels and the Rothschilds vied in technological innovation, and modern refining techniques and much else were pioneered here.

Among other innovations the Nobel brothers built one of the world's first oil tankers, the Zoroaster, to carry oil from Baku up the Volga into Russia. What made this a "tanker" was that instead of loading the ship with barrels, the oil was pumped directly into the hold and then pumped out again. This was a steam-powered ship, so great care had to be taken to keep the coal burning under the boilers from somehow igniting the oil. That's why before this time oil had generally been shipped on sailing vessels. 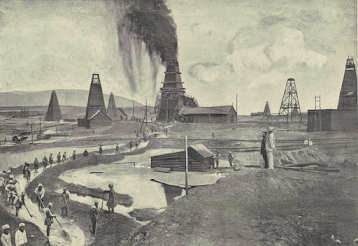 The oilfield workers lived in shanty towns close by the wells; the largest was known as the Black City. The whole city stank of oil but it was worst in the workers' district. Oil regularly rained down from the sky, blackening everything. It ran in ditches and lay in pools on the ground. It tainted the water and the air. One foreign writer calculated that life expectancy in the oilfield districts was about 25 years, on par with the worst periods of industrial Manchester and Liverpool. 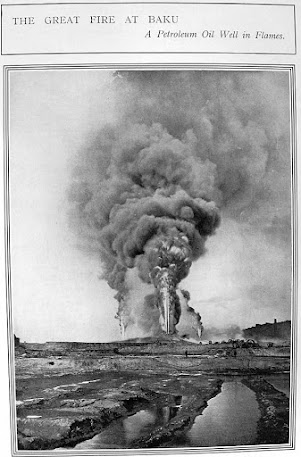 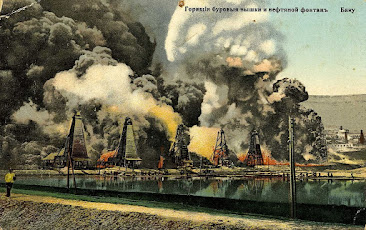 Fires were frequent. These caused horrific injuries and a few deaths, and since they frequently burned for weeks they added to the awful pollution. When Stalin was in Baku in the early 1900s he set at least one fire and extorted money from the oil firms by threatening to set more. According to Montefiore, in 1906-1912 the Bolshevik organization got most of its funding from these oil companies, thanks to their power among the workers. 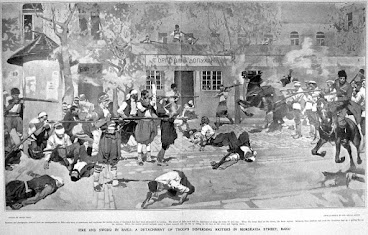 The place was crazily violent. There were brawls between workers of different ethnicities. There was the violent workers' struggle led by Stalin. There were violent gangs of criminals who specialized in kidnappings or bank heists – some of whom were also allied to Stalin. This old print shows Russian troops firing on rioters in Baku, a common occurrence. Montefiore says that the revolutionaries actually had a fair amount of support among oil company managers and their wives; even to the people benefiting from it, the system stank of oil, cruelty, and corruption. 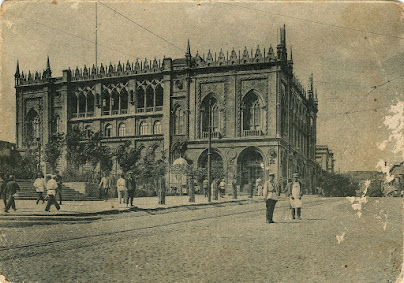 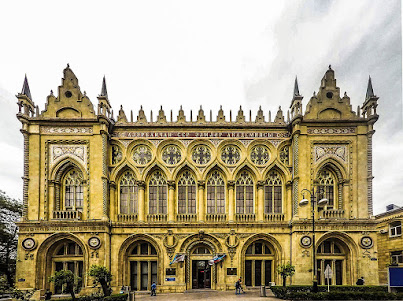 In 1900 Baku and its hinterland produced half the oil in the world. Which means, of course, that it was producing a staggering amount of wealth. I always thought the Nobels got rich from dynamite, but not so; most of their money came from Baku oil. The Rothschilds, already insanely rich, doubled or tripled their fortune. At least ten other men got crazily rich off Baku's oil, including some Armenians and Persians. They spent their money building lavish villas. (And staffing their villas with platoons of bodyguards.) Above is the Ismailiyya Palace, built in 1906-1913, in old and recent photographs. 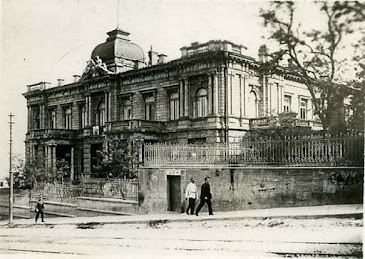 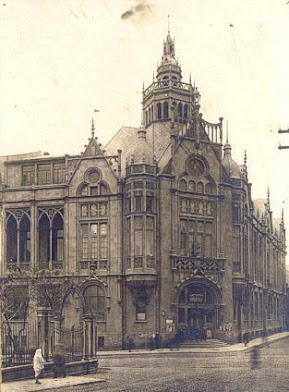 Homes of two Armenian magnates. These buildings were all seized by the Soviet state in 1920 and they now house various organs of Azerbaijan's government. 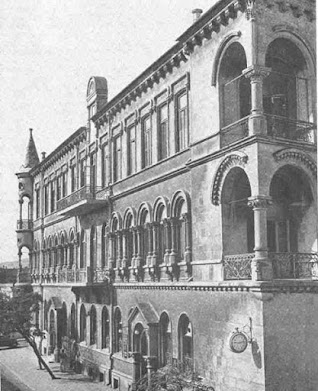 The headquarters of the Rothschilds' oil company. 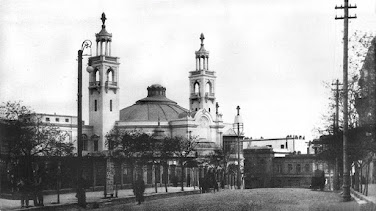 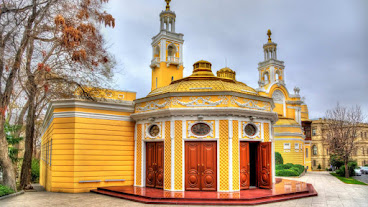 The Baku Club, then and now, said in 1902 to be the most expensive club in the world. It now houses the national symphony. 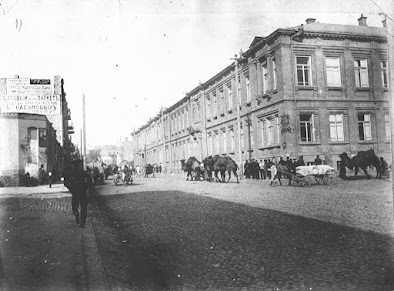 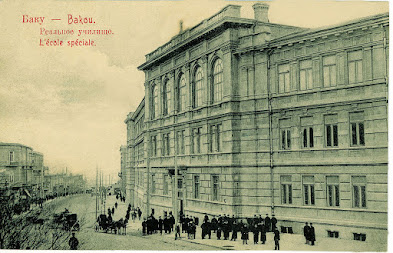 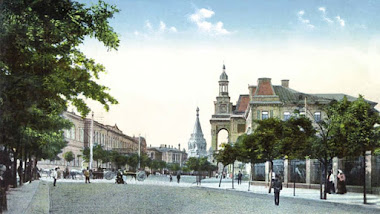 Views of the main streets. People said the central city was like Paris, with beautifully dressed people promenading down the boulevards and through the parks. Except that the very rich were shadowed by teams of bodyguards, any shift in the wind might blow in rains of oil or oil smoke, and a violent fight between workers and Cossacks might erupt at any time. 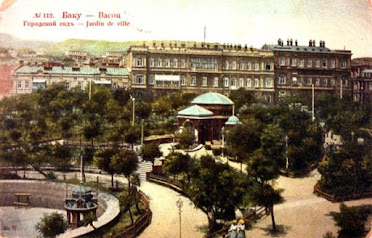 The Governor's Garden, open to anyone who could afford to dress appropriately. 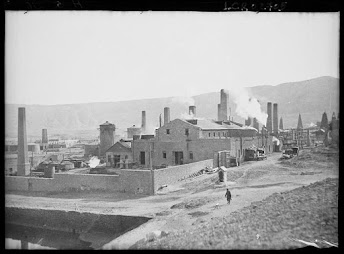 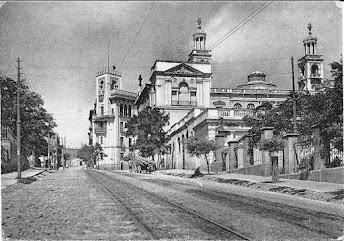 Even though it sits in Central Asia, at the far edge of Europe, Baku's history epitomizes the industrial revolution. Technological innovation ran at a dizzying pace, and the world's wealth was rising exponentially for the first time. The middle class grew enormously; for the first time in history, masses of people lived comfortable lives. Cities were built from nothing in a few years, or completely rebuilt. Iron train tracks and canals crisscrossed the landscape. Among the things they carried were people, who left their old homes and moved to new cities at an incredible pace. In many places, like Baku, this led to greatly increased human diversity and the breaking down of old ethnic and class barriers. 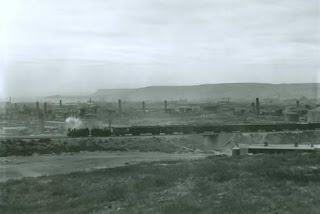 But the cost was staggering: the despoiling of the earth, the staining of vast areas with the black poison of coal or oil, the ruination of millions of workers by coal dust, oil fumes, chemical reagents, or asbestos. A surge in inequality as the rich got staggeringly rich. And the awful, violent politics of revolution and reaction, driven by the workers' sense that they were being treated as just another raw material for the mills. This was starkest in Russia, where the Tsars responded to any challenge by sending in the Cossacks. They thought they could ride the two-headed hydra of accelerating economic change and worker resentment by violently applying spurs and whips, but they could not, and it is easy to think that 1917 was no more than they deserved.
Posted by John at 8:21 AM

If one's goal is rapid industrialization, I suppose you could say the lesson of Stalin's rule is that the tsars didn't apply enough violence, or enough of the right kind of violence. Stalin died as arguably a stunningly successful dictator, perhaps the most successful dictator of all time. He's a good example of how tyrants don't always fall, and there is not always justice in this world.

Montefiore's view seems to be that the Tsars were too oppressive and violent to be loved but too incompetent to be feared.

Interesting. It's always seemed to me that, as with Louis XVI, part of Nicholas II's incompetence was that, deep down, he didn't much want to rule, but felt he had to as a duty to God and his ancestors.

I suppose a question is how much the failure of tsardom was a matter of particular competence or techniques of ruling, and how much Russian society had simply moved away from the forms that had allowed a traditional monarchy to manage it. If we look at, say, the tsars from Alexander I and before, they almost all used plenty of violence, and some of them were reputedly quite incompetent, and yet the system itself arguably faced no serious challenge. Perhaps one could say that, if your system requires a very precise balancing of force and competence, it is inherently an unstable system. Monarchy as a system was unstable in the late 19th and early 20th centuries, but quite stable as a system in say, the 18th century.