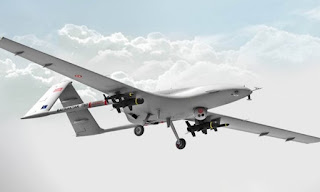 Bayraktar TB2 Drone, wingspan 12m (39 feet)
Libya's miserable post-dictatorship history has lately been about a civil war between the internationally-recognized government in Tripoli and an "upstart general" named Khalifa Hifter and his Libyan National Army. Hifter complains, with some justification, that the Tripoli government is a farce incapable of imposing order on the country, and he says the only solution is a strongman like him. For some reason he has gotten enough money and backing in the Persian Gulf, Cairo and Moscow to mount a serious bid for power, and in 2019 he seemed to be winning.

Then came the Turks and their drones.

Turkey had intervened in the Libyan civil war in 2019 on behalf of the government based in the capital, Tripoli, aiming to counter the United Arab Emirates, a regional rival of Turkey that was supporting a renegade Libyan general. Turkey, in part, wanted to prevent another state hostile to Turkey from gaining strength in the Middle East, according to Wolfram Lacher, a Libya expert at the German Institute for International and Security Affairs.
Turkey used its military power in Libya, with drones a critical component, as both a carrot and a stick, he said.
The Turkish military had held off on providing full support to its Libyan allies until they agreed to sign deals affording Turkey expansive energy exploration rights in the Mediterranean Sea. But once the deals were signed, Turkey spared no effort to beat back an offensive on Tripoli by the UAE-backed Libyan National Army, or LNA. Turkey deployed Syrian mercenaries and launched its armed drones to disrupt the LNA’s supply lines.
A critical moment came in May when Turkish drones, in coordination with Turkish warships, attacked the strategic al-Watiya air base, about 80 miles south of Tripoli, allowing government forces to capture the base and ending the LNA’s Tripoli offensive.

Among other things the drones are said to have destroyed several Russian Pantsir air defense systems.

The future is here, at least the drone warfare version.

1) Drones are definitely part of the military future. But you still can't accomplish much without some sort of ground force. There are signs that those ground forces will more and more be composed of mercenary and similar stateless groups: Afghans in Syria, Syrians in Libya, Kashmiris anywhere the Pakistanis choose to send them, etc.

2) Interesting how irrelevant the US seems to be in this Libya situation. The two main foreign rivals, the Turks and the UAE, are both in some sense US allies, and even then the US seems irrelevant, either to keep them from fighting each other or to choose which should win. I think we are likely to see this more and more. I'm not bothered by it, and I doubt most American voters will be either, but it is interesting how far we've come from the Bush vision of American Empire, and how content the country seems to be with that.