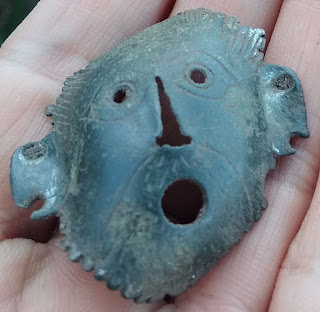 Amazing photographs and videos of starling flocks in Denmark.

Long NY Times piece on Chaska, Minnesota, a suburb that Trump won in 2016 but that went big for Biden in 2020. Part of the story is that the violence surrounding the Black Lives Matter protests in Minneapolis did not make the median voter turn to Trump, and that many people were actually awakened to take racism more seriously.

Top US Air Force general says he is "not so much enamored with airplanes," has other priorities.

BBC piece on the rampaging orcas off Spain and Portugal, which attributes much of the damage to two particular animals and suggests the root cause is overfishing of bluefin tuna.

Photographs of London pubs in the 1920s, via Spitalfields Life.

The Micrarium, a stunning museum display of thousands of prepared microscope slides.

Portland’s anarchists say they support racial justice. Black activists want nothing to do with them.

A police shooting and the power of unions in Rochester, NY.

A table made of fossilized Ichthyosaur dung, now in the Lyme Regis museum.

Once again, the Democrat won the booming counties, while Trump won the places that are struggling. The 477 counties that went for Biden make up more than 70% of the US economy, while the 2,497 counties that went for Trump make up less than 30%. When Biden flipped Maricopa County, Arizona (Phoenix), that gave him all of the 30 richest counties. (Washington Post)

Interesting essay by Rana Dasgupta arguing that democracy was a product of the industrial age, when leaders actually needed workers. The post industrial economy, he argues, is taking us back to the 18th century, when British leaders could ignore workers because their money came from the colonies and world trade, making the common people unnecessary to the leadership.

I clicked through, and I'm glad I wasn't drinking anything or the picture would have had me perform a spit take. So then I clicked further to get the actual video of the thing in action, and I practically fell out of my chair laughing.

It's so bad. It is SO BAD. Imagine a halloween haunted house soundtrack CD with that one cheesy stock stereotypical wolf howl you've heard a million times, played on the cheapest, tinny-est speakers you can imagine. Then add in cheap plastic laser gun sound effects that activate in time with the red eyes flashing haphazardly. It's absolute junk, and I don't know whether it's offensively stupid or endearingly dumb.

The thing is, it will probably work just fine - like most wild animals, bears try to avoid strange noisy making things. They even did the right thing and put it on a motion sensor, and not just constantly active all the time, because the latter presents an opportunity for the bears to get used to it and learn to ignore it.

I just have no idea why 1) they tried to make it look like a wolf, since there have been no wolves in Japan for hundreds of years; 2) they made such an unconvincing wolf with such cartoonish features; and 3) why they built it five or so feet off the ground on thick metal stilts.

The best part is, this isn't even the first time or place someone has done this! There's a link to another article from a couple years ago showing off a different "robot wolf" in another village, which is almost identical in design, but not built on stilts, and weirdly only about 2 feet tall.

That said, supposedly they have an effective range of about a kilometer, so I imagine it doesn't matter what they look like, just that they make weird noises when bears trip motion sensors nearby. Which is part of why it's so weird - they could have made it look and sound like anything, and they went with cartoonishly bad halloween store wolf monster robots, for some unfathomable reason.