A Historical Footnote on Slavery and Freedom 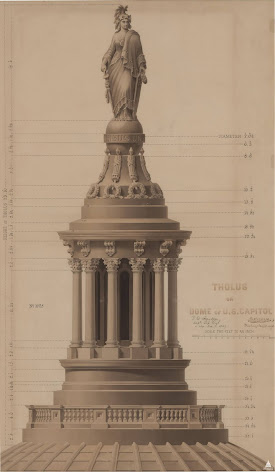 The departure of southern representatives from the US Congress in 1861 left it with a large Republican, anti-slavery majority. Some anti-slavery men immediately began working to end slavery in the one place everyone agreed they had the constitutional power to do so, the District of Columbia.

What with getting the Civil War under way and all the Congress was a bit distracted in 1861, so it was not until April 16, 1862 that a bill ending slavery in the federal district could be passed. That bill provided compensation of up to $1,500 for slave owners, which was partly a political move to soothe slave owners in Maryland, Kentucky and Missouri and partly to keep DC slave owners from either rushing their property across the district line or attempting to backtrack on manumission later. A formal process was set up, with enslavers and enslaved appearing together before a board that would review applications for compensation and set the amount, while simultaneously issuing manumission papers that were sufficiently impressive to grant the freed people real freedom of movement. After all, at that time nobody knew the end of American slavery was coming. These records make the enslaved residents of DC in 1862 perhaps the best-documented slave population in history

The records of this Board of Commissioners for the Emancipation of Slaves are kept in the National Archives. There one may read a a petition from a certain Clark Mills for compensation in the amount of $1,500 for a man named Philp Reid. Reid is described as

Mulatto color, short in stature, in good health, not prepossessing in appearance, but smart in mind, a good work man in a foundry, and has been employed in that capacity by the Government, at one dollar and twenty five cents per-day.

Clark Mills operated one of the few foundries in America capable of casting large bronze statues. He had been in the business since the 1840s, when he cast the equestrian statue of Andrew Jackson that still stands in Lafayette Park in front of the White House. At that time Philip Reid was already working for him; in fact, said Mills, he purchased Reid in Charleston and brought him along to Washington

many years ago when he was quite a youth... because of his evident talent for the business in which your petitioner was engaged, and paid twelve hundred dollars for him.

By 1862 Reid was the most valuable man on Mills' crew; the government was paying $1.25 a day for his services, but only $1.00 for the five free white men who worked alongside him.

The business for which the government was employing Mills and Reid was casting the statue of Freedom that stands on top of the Capitol dome.

DC emancipation had become law before the statue was finished, so Reid was able to attend the ceremony as a free man. Anti-slavery reporters got wind of the story and spread it around the country as the perfect metaphor for the continuance of slavery in a land devoted to freedom, so Reid became modestly famous, which helped him launch his own foundry business a few years later. 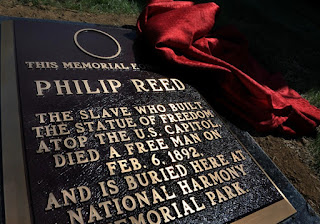 He changed the spelling of his name after he became free, so the monument set up for him in the National Harmony Memorial Park looks like this.
Posted by John at 8:22 AM

One interesting aspect of this story is that it serves as a nice counterexample to the old materialist canard that slavery is somehow incompatible with industrialism and was thus "doomed" whether the Civil War was fought or not. There are plenty of other such stories, including from the Confederates' own munitions factories during the war and from post-bellum industrial work using convict labor.