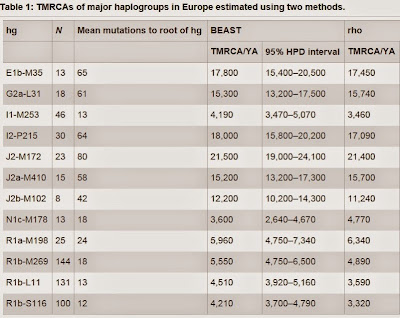 It is becoming more and more apparent that the genetic competition among human males has been intense throughout our history, and that in this competition most men have been losers. Studies of the Y chromosome, passed down exclusively through men, show that most men today are the descendants of rather small groups of extremely successful men in the past.

The latest study to posit this result looked at 344 men from Europe and the Near East. Analyzing their Y chromosomes, the researchers found that more than 70% of them descend from six lineages that underwent very rapid expansion in the Bronze and Iron Ages. In the table above, TMRCA is Time to Most Recent Common Ancestor, estimated by two different methods.

Now this is not a very large study, and the estimates have a large margin of error. It actually does not match up in detail with some other studies I have read. But it agrees with many recent studies in finding these male lineages that underwent explosive expansion at some time in the past.

If these studies are right, most men who lived 5,000 years ago have no living descendants; most of us descend from a comparative handful of "super fathers." Of course the Bronze Age is the period when Europe first came to be dominated by sword-wielding warrior aristocrats; when Indo-European languages spread across the continent; and when, it seems, warrior tribes conquered and subjugated everyone else. But note that these successful recent lineages are found within both the R-1 clades that may be associated with the Indo-Europeans and within the J clade, which almost certainly came to Europe with the first Neolithic farmers; not all of the warrior dynasties were among the invaders.

There comparable evidence for women is much weaker. We study the genetic history of women using mitochondrial DNA, which we all get from our mothers, and mitochondrial DNA is something quite different from the rest of our genomes. Still, the evidence we have does not show the same pattern of just a few founding mothers in recent times. Genetic competition among women has been much less intense than among men.

The gendering of this pattern argues that it relates to male success in warfare. How that relates to the other great pressure on human populations, infectious disease, remains mysterious, as do many other things. But our knowledge is expanding so fast that we really may someday know.
Posted by John at 8:55 PM

It looks to me like half of the listed hg's (haplogroup, I assume) are older than 10,000 yrs (and half of those are within a couple thousand years of the last glacial maximum). Two of the others seem to date back before 3000BC, which means they don't really fit into what I would think of as the Bronze Age in Europe (my understanding is 3000BC would barely qualify as Bronze Age in Egypt and Mesopotamia, as far as war is concerned). So it looks to me like a third of the hg's, not 70%, date to the days of significant metal weapons in Europe. Clearly I'm missing something, but I don't know what it is.

Look at the N column, showing the number of descendants in each clade.

The Yamnaya Culture on the steppes, the best archaeological candidate for the Indo-European homeland, dates to around 3500 BC, so not quite Bronze Age, but well after the Neolithic expansion.

Further questions, to make sure I understand this right: is the argument that each hg represents a single male ancestor? And, if you have that hg, are you then descended from that male ancestor and no other?

Or is the argument that if you have that hg, at some point that ancestor's DNA got inserted into your ancestral lineage, so that many Europeans share the DNA of a small number of super-successful male founders, alongside the more widely scattered DNA of other male ancestors who were not descendants of the small number of male founders?

In other words, in the female line you may be in some sense "descended" from a humble peasant male type from the year 3000BC, but your male genetic material comes from one of the superfounders.

Yes, the analysis just applies to the Y chromosome line, strictly male to male. So, yes, you have DNA from many, many different people by the time you go back 5,000 years, some of them humble male peasants. Just the luck of some men having only daughters means that some Y-chromosome lineages will go extinct every generation. But for a Y-chromosome lineage to become dominant in a large population the men who carry it have to have a lot more children than the ones who don't.

The thing I keep wondering about is disease; we have genes for disease resistance that emerged within the past 5,000 years and are now pretty much universal among people of west Asian descent, and for that to happen the impact on survival has to have been much bigger than these warrior founder effects. After all, their genes are carried only by a minority of men today, whereas we all have smallpox resistance genes.

"their genes are carried only by a minority of men today": but I thought you were saying essentially that 70% of male Europeans have their Y chromosomes from this small number of founder lineages. That's tens, if not hundreds, of millions of men! Yes, a minority in the world, but not a small number. And elsewhere on their genes may have been the crucial immune system mutations, which they would pass to their offspring of both genders.

At least some older works I've read on disease (of the vintage of McNeill's Plagues and Peoples) basically said that most infectious diseases made their way into humans from farm animals. If these superfounders came first from the bringers of agriculture, and then from steppe herdsmen, perhaps they thrived in the new economy and were able to spread it precisely because of immunological mutations.

On the other hand, if it's a matter of warfare and other forms of direct male competition, something stranger and more interesting than a Bronze Age, Nietzschean version of The Dating Game must be going on. To actually drive out the genes of the males of a whole population, and replace them with those of a few conquering founders, implies a sustained effort over generations, it seems to me.

And one puzzle would be why that sort of thing finds no real echo in historical societies. Yes, yes, in virtually all historical societies rich and powerful men may be able to have sex with lots of women, but that won't realistically breed out the male genes of all the other males. All the Romans weren't descended from Caesar, or even Tarquin.

A third factor would be purity rules and similar customs that promote certain marriage patterns.

What about Europeans and American Indians? Almost complete Y-chromosome replacement. Or Africans vs. Caribbean Indians?

Or think about this: suppose enough Saxon immigrants came to Britain to make up 5% of the population, and then over the next ten generations immigrant families average 50% more surviving offspring than native families; by the end of that time their descendants make up 2/3 of the population.

To put it another way, it may be that in 1800, some large majority percentage of New Englanders were descended from, say, the first 200 men to settle. But they weren't all descended from John Winthrop and his four closest buddies.

Thinking further (sorry, I find this whole issue fascinating), one could imagine something like the following scenario: a society that takes very seriously the trope that the best way to build a military unit is to have them all be descended from one man; 20 founders bringing their lineages together to create an army; a conquest, followed by a generations-long population replacement on the Celts vs. Saxons model you cited, with at the same time marriage customs among the conquerors that emphasize both polygamy and females marrying into male lineages that retain their identity; with sporadic civil wars among the conquerors that result in the extermination of some male lineage groups; at the end of a few hundred years you might well have a society where 2/3 of the men are descended from, say, three founders.