John Reader, "Africa: A Biography of the Continent" 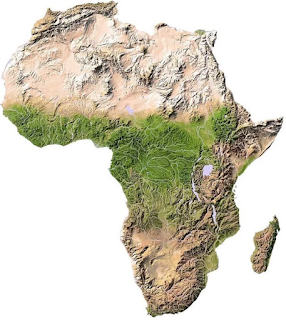 If you're looking for a one-volume introduction to Africa and its history, I suggest John Reader's 680-page epic, published in 1997. It is readable, rich, and full of fascinating information. But especially, and most impressively, it is coherent. Until I read this book my knowledge of African history was highly fragmentary, with nothing but the borders of the continent holding it together. Reader's book made it more unified for me than anything else ever has.

Reader's argument in the first half of the book is that Africa lagged behind Europe and Asia because Africa is a really tough place for people to live. Until after 1950 Africa's population density was much lower than those of the other continents, because a combination of disease, poor farming conditions, and shifting weather patterns kept it that way.  You have often heard about some plant or animal that exploded after migrating to a new place because it lacked natural enemies; Reader thinks this applies to humans as well. Africa, where we evolved, has the most predators of various kinds that evolved to trouble us. The most important is malaria, but there are many others. Between this, lousy geology (see below), and then the enormous tragedy of the slave trade, Africa entered the nineteenth century far behind the European powers that proceeded to divy it up and loot its various valuable commodities. 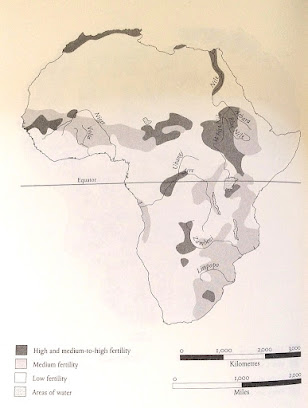 Reader's map of the fertility of African soils
Reader's book begins in the Precambrian, laying out Africa's geological origins. This sounds random, but with Reader everything ties together. Through the course of the book he refers several times to the bedrock of Africa, which explains why agriculture remained so primitive across most of the continent (above) and also the presence of gold, diamonds, and other minerals that radically changed African history in the 19th century.

Reader gives some attention to human origins and the Paleolithic, but the book really gets going in the Neolithic. Obviously a book on a whole continent can't give equal attention to every area, and Reader's eye wanders around. For the Neolithic he focuses on the Nile Valley and the adjacent parts of the Sahara, which was much wetter in some periods than it is these days. During periods when the Sahara was wet enough it was inhabited by three different groups of people: hunter-gatherers, pastoralists, and farmers, who seem to have lived fairly peacably side by side and traded with each other. In fact our first evidence of herding in the region is cattle bones found on the camp sites of hunter-gatherers.

I already wrote here about the remarkable society that developed in the Interior Delta of the Niger River, which I found fascinating. Otherwise much of Reader's attention during the Classical and Mediaval periods is focused on Ethiopia. A rich Christian civilization emerged there, with productive agriculture based on a combination of Middle Eastern and African plants (wheat, teff); among other things it produced sub-Saharan Africa's only native script. The Ethiopians carried out diplomatic relations with the Byzantines, trying but never succeeding to ally against Muslim enemies. There isn't much on the medieval empires of the Sahel (Songhai, Mali), partly because Reader thinks the sources about them, almost all Arab, are suspect. Reader has an excellent section on the spread of the Bantu peoples, who developed their system of mixed agriculture, cattle raising, and iron making in the area of modern Nigeria and then migrated across all of Africa's southern cone.

The slave trade gets a very long and rich section. Reader lays out slavery's early roots in African cultures, the trade to the Middle East via the Indian Ocean, and then the European trade in the Atlantic. Reader thinks slavery became a major part of many African societies because agriculture was so difficult. He cites calculations showing that in many areas the labor of two adults was not enough to reliably feed a family. (Even when they were healthy, which in Africa they often were not.) In much of western Africa there was no ownership of land, because land was effectively valueless without enough labor. Everyone was constantly struggling to find workers. The wealth of prominent families was measured entirely in terms of how much labor they could command; hence, various forms of slavery were well entrenched by the time of our first records and probably since the origins of agriculture. Even so, the profit earned by an agricultural worker was so low that when traders appeared offering valuable goods, the temptation to just sell people instead of working them was too great. But the export of millions of people only made the labor shortage worse; this, Reader argues, kept Africa from developing in the slave trade era. The curse spread to all of sub-Saharan Africa, since raiders working inland from the Atlantic coast eventually penetrated so far east that they ran into raiders working for Muslim traders on the east coast. Reader thinks that many of modern Africa's ethinc groups were created by people who fled from slave raiders into highland zones, or banded together to fight them. The whole continent was shaken up, and all its other industries wrecked, because of the profits those strong enough could earn by stealing people and selling them to the ships.

By way of an alternative, Reader has a chapter on the island of Ukara in Lake Victoria. On this small island, highly fertile soils, the absence of mosquitos and tse tse flies, and the availability of markets accessible by boat created perfect conditions for high-intensity agriculture. The 16,000-18,000 residents (all free) responded by creating a system that would make Dutch gardeners proud, with extraordinary crop yields wrung from small plots. Ukara is also an exporter of people. Under the right conditions, Reader is saying, Africans could create efficient agricultural and other systems, leading to high populations and technological progress. It's just that the conditions were mostly terrible.

Reader lived for several years in South Africa, and he has a long section on the development of white settler societies in that region. It is a thoroughly sordid tale of land theft and enslavement, made even more nauseating by the cloak of do-gooding language nineteenth-century Europeans felt compelled to cast over their wicked deeds. When African communities were attacked, their men killed or driven off, the women and children brought to labor on white farms, this was called "Christianization." Again, the driving force behind many of these crimes was the need for labor. Europeans trying to farm in southern Africa constantly needed more workers, and the trickle of European immigrants was never enough. Various plans to separate the races (leading eventually to Apartheid) always failed, because there were just not enough white people to do the necessary work.

Then the whole region was shaken up by minerals, first the astonishing riches of the Kimberley diamond mines and then the gold of the Rand. I very much enjoyed Reader's account of the early days of Kimberley in the 1870s, when many whites and even a few blacks got rich from 3x4 meter plots of ground. At Kimberley the diamond fever phase lasted a decade, before the mines got too deep for solo work and a consortium of investors led by Cecil Rhodes took over the whole shebang. And proceded, as you would expect by now, to employ a labor system little different from slavery. The greed of our species never ceases to amaze me. Kimberley was such a rich place that the company could have paid good wages and still made vast profits, but instead they used their political clout to get the government behind schemes of vicious exploitation that earned them a return of nearly 50% per year for decades. The same system of compounds and labor passes was then extended to the gold mines, becoming a fixture of 20th-century South Africa. 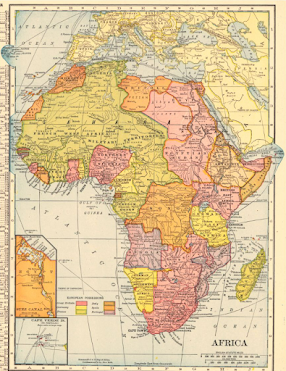 From there Reader's attention moves to the Belgian Congo, where King Leopold II's mad desire for colonies set off the "Scramble for Africa." The Belgian Parliament refused to support the king's schemes, so he had to finance his venture himself, which led to intense pressure to harvest wild rubber to cover the payments on the massive debts he ran up. Rumors about the brutality of the rubber trade made it back to Europe, but Leopold managed to deflect them until photographers made it to the Congo and brought back images so grisly they forced the King to give up his colony. But by that time the European powers had already divvied up the rest of the continent, except the Christian kingdom of Ethiopia, launching the colonial era.

The depressing thing to me about this period is the minimal resistance offered by Africans. As Reader shows, this had a lot to do with the aftermath of the slave trade. Slave raiding taught Africans hate and fear each other, so there was no chance they could work together. In fact many kingdoms and peoples welcomed European overlordship, seeking protection from slave raiding states. The slave trade had also created a demand for foreign goods that was hard to satisfy without other exports; hence, many African leaders were eager to support colonial development schemes. Resistance mostly erupted later, after Africans came to understand that they had been lied to. But by that time the colonial powers were entrenched, and their mostly African, machine-gun equipped armies easily put down revolutionaries armed with muskets.

To me the most interesting part of the colonial chapters concerned education. Various government boards in Britain, France and Germany kept finding that Africans should be given an education appropriate to their own situation. This was easy to implement at the elementary level, but once students had learned to read and write, nobody knew what African things to teach them. So the elite secondary schools that all the powers set up taught European literature and history, including a heavy dose of the classics. The leadership of Africa's revolutionary generation was drawn largely from the attendees of these schools, and many of them had also attended university in Europe. In their memoirs they all wrote about the divided self that this experience created; they tried to lead Africa, but they understood full well that they were no longer entirely African. When educated Africans wrote about the "colonial experience', this is what they meant: not just oppression, but the weird psychology of being torn between the art and science of Europe and love of their homelands. Many ended up living in Europe, especially those who lost out in the power struggles that followed independence.

A few random things I learned from Reader:

If you want to know more about Africa – and really, how many Americans or Europeans really know very much about Africa? – Africa: A Biography of the Continent is the best thing I know.