Inventing Yourself as a Success: R. Buckminster Fuller 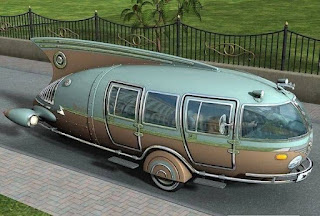 R. Buckminster Fuller was one of those people who got very famous without accomplishing very much. He portrayed himself as a visionary inventor, a futurist, a counter-culture opponent of everything conventional. But the main thing he invented was himself, and his main achievement was to get very famous on his own terms. Some excerpts from a review of a new biography in the NY Times:

There have been several books about Fuller and his work, but they have tended to be written by acolytes who took the Great Man at his word. The problem, as Nevala-Lee warns, is that “Fuller’s writings and talks overflowed with misinformation and outright falsehoods, which he methodically built into the reality distortion field that allowed him to achieve so much in a single lifetime.” . . .

Fuller came from an elite background and traded on his family connections for decades:

He was born in 1895 in Milton, Mass., an affluent suburb of Boston, to an established New England family, a grandnephew of the feminist writer and editor Margaret Fuller. Like his antecedents, young Fuller attended Harvard. Like Bill Gates and Mark Zuckerberg, he dropped out, although he did not leave voluntarily — he was expelled, twice. Like Steve Jobs, another college dropout, Fuller became an entrepreneur, but he was no prodigy. Jobs lived only 56 years; by 53, all that Fuller had to show for his efforts was a string of business failures: a building system whose financial backers eased him out of the company, a three-wheeled car prototype [top] that overturned and could have seriously injured his wife and daughter, and a prefabricated house that resembled a flying saucer and did not progress beyond the prototype stage.

But Fuller never let his failures daunt him. Not able to impress scientists and engineers with his science or engineering, he moved in different circles:

His unconventional imagination and energetic optimism attracted admirers and supporters. A bohemian at heart, he became friends with the composer John Cage and the sculptor Isamu Noguchi, and was close to Margaret Mead and Marshall McLuhan. “Bucky Fuller was no architect, and he kept pretending he was,” complained Philip Johnson, who was immune to Fuller’s charisma. Yet it was precisely among architects that Fuller acquired an active following. He taught in architecture schools, his work was published in architecture magazines and he was close to Charles Eames and Frank Lloyd Wright. It was Wright who slyly put Fuller in his place: “I am an architect interested in science. Buckminster is a scientist interested in architecture.” 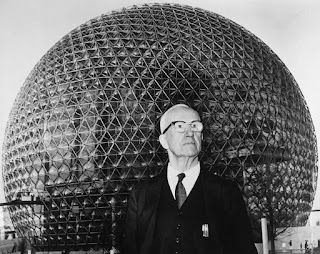 And then came his one real invention:

By the late 1940s, Fuller had learned his lesson and he avoided investors and financial backers. He built his first experimental geodesic domes inexpensively with students, initially at Black Mountain College, a progressive school in North Carolina. They were extremely strong for their size, and they maximized internal volume with the smallest amount of material. The first practical geodesic application was a covering for the central courtyard of the Ford Rotunda in Dearborn, Mich. The lightweight lattice structure was one-twentieth the weight of a conventional steel roof, which the building wasn’t strong enough to support.

Never mind that the domes Fuller built always leaked and usually fell down; they were cool!  They somehow managed to fascinate both the science fiction, let's go to Mars crowd and the hippies who wrote The Whole Earth Catalog.

In 1959, the Museum of Modern Art mounted in its sculpture garden a Fuller show consisting of a geodesic dome, an octet truss (a lightweight space frame) and a tensegrity mast (a self-supporting tower made of cables and rods). The New York Times architecture critic Ada Louise Huxtable gave the work fulsome praise, calling it “the greatest advance in building since the invention of the arch.” The octet truss was invented by Alexander Graham Bell, but never mind — in the eyes of the world, Fuller was a latter-day Edison, a visionary inventor.

Fuller's real gift was with language; he coined the word "synergy" and was the first to write about "spaceship earth."  Those who heard him speak were often blown away, even if they couldn't exactly say what he had been talking about:

A professor at Southern Illinois University, where Fuller was based for more than a decade, observed that “he’s not a teacher — he just talks.” That was not intended as a criticism. Fuller’s public lectures, which could go on for five or six hours, were famous. Always extemporaneous, these modern-day Chautauquas were a startling weave of poetry and science, delivered in his own peculiar locution. Stewart Brand summed it up well: “Fuller’s lectures have a raga quality of rich, nonlinear, endless improvisation full of convergent surprises.”

I wonder a lot about characters like Fuller. Part of me despises them. I think people should be judged for two things they lack, 1) honesty and general moral fiber, and 2) actual accomplishments. And yet another part of me admires this sort of performance, and I have fantasies about standing before an audience and weaving my half-coherent thoughts about society, history, and the future into spellbinding lectures. I also suspect that this is the only possible path to real stardom in our world. You may be great at what you do, but in a global society with millions of members, plenty of other people are great, too. The attention flows to the ones who dazzle, who startle, who shake the pillars of convention, and that attention is crucial to truly moving the culture even a tiny bit.

FWIW, my parents were big fans of modern architecture and design, They filled our house with stark, pointy metal furniture that, incidentally, alarmed both me and my sister--all those edges and points to bump into. We both grew into adults who like a lot of wood and cloth in the house. Anyway, the point is I have dim childhood memories of them talking about people like Wright and Fuller. There was some moment when my mother said something like "He's almost a Buckminster Fuller" or "That's like Buckminster Fuller"--and the tone was that Fuller was a silly person and a bit of a joke.

So there's a small illustration of the idea that someone like Fuller can become famous, but the lack of real accomplishment behind the fame shines through. Sure, they can win a cultish following, but who wants that?

I'm not sure you have to challenge convention to become famous. To *move* the culture a little bit--well, yes, almost by definition that would involve mounting some shock of the new. But, of course, one of the brilliant things about our culture is that we can take almost any startling, threatening thing and conventionalize it. I use the word *brilliant* here without irony.

Back in the day,