A Medieval Kitchen Unearthed in the Czech Republic 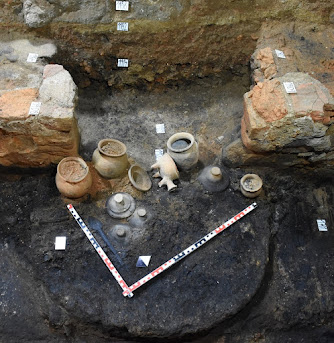 Czech archaeologists working in the town of Nový Jičín, in Moravia, dug down through a paved courtyard dating to the 16th or 17th century. Underneath they found something rather remarkable, an amazingly well preserved kitchen dating to the early 1400s. The intact dishes were so clean the excavators thought they had just been washed and then put on the hearth to dry. (The hearth is the semicircle in the excavation floor; the firebox would have been within the stone walls.) This was a log house with stone foundations. It belonged to a burgher family, but not a rich one:

Since the house was located near the town walls, this would have been a less wealthy burgher family. The richest burghers would have lived in so-called ‘beer court’ houses around the town square. 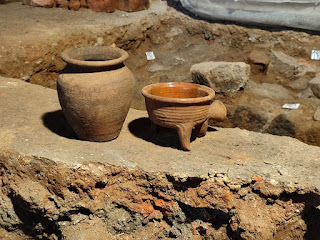 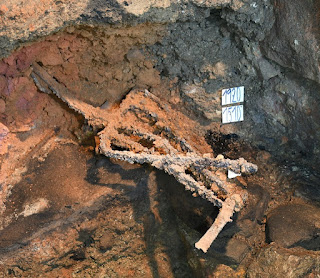 Iron grill deformed by the heat of the fire that destroyed this house. As to why the house was abandoned, the archaeologists have a theory:

The working hypothesis is that the house was destroyed during the conquest of the city by the Hussites in 1427, when Hussite forces campaigned in Moravia and Silesia. Several independent historical sources mention the siege and conquest of the town, including the massacre of some of its citizens.

The first time this happens to you – you find something amazing because people got massacred or what have you – it can be a very disturbing experience. But most of us get used to it. Great stuff almost always ends up buried because somebody died.

This raises an opportunity to ask a question I was asked yesterday, and was completely unable to answer: how do things like that kitchen get buried? I'm presuming the kitchen was originally at ground level--indeed was the ground level. How did the ground level end up however many feet higher, with the kitchen buried beneath it? Did someone come along, lay out several tons of earth and stones (even if you were only raising the level by one foot, I would think it would take at least a couple tons of fill to make something "courtyard" sized), and then build the courtyard on top of that? Why not clear away the ruins of the old house and build on the original ground level?

And how is it that the same thing seems to happen sometimes to whole city blocks' worth of ruins? How did we end up with Troy IX built *over* Troy VIII, instead of where Troy VIII used to be? And why does this seem to happen rather often?

Are all these "levels" actually crammed into a few inches? If so, how is there room for whole pots, as pictured here?

I admit the answers may be simple and obvious when one thinks about them, but at the moment I haven't a clue.

Obviously one understands, say, Pompeii. What about places with no convenient volcano?

It isn't simple at all; there is a whole branch of archaeology called "taphonomics" that deals with the question of where the dirt came from.

In a city this happens in two main ways: first, people are constantly bringing stuff into their communities: building stone, brick, wood, everything else. When they are done with it they usually just push it into the closest-low-lying spot, e.g., an abandoned cellar hole. The effect of this is to make all urban street levels rise gradually over time. In downtown Manhattan the Dutch levels are 30 feet below the street.

If you wanted to level a building back to the original ground surface, what would you do with the material? hauling it away would be expensive. So you just spread it out. In some English villages there is more than a food of soil mostly derived from old wattle and daub.

Second, people are always digging holes. What happens to the dirt? Mostly it just gets spread around. It is common for there to be a layer of dirt an inch or two deep across a yard marking the excavation of a new well or privy. Sometimes they will use it to fill in a different hole, or a low spot, but again this just makes the overall level rise over time.

When we started building sewers and other buried infrastrusture, this made the process happen even faster. If they are ditched, then the pipe takes up space, making the new level of the ground above it a little higher. If they are tunnelled, then the dirt still has to go somewhere. Typically it is dumped in some low-lying spot, which again raises the overall level.

Hmm. What about the specific case of the Czech kitchen? Suppose, say, 150 yrs separate the abandonment of the kitchen and the laying-down of the courtyard. Could the processes (note, this would only the unmechanized ones) you're describing lay down some number of feet in that time (as the pics make it look)? I'm not saying the processes couldn't do that; I'm curious.

I suppose one would have to read the whole report. Maybe there was a barn there for a while, and so part of what covered the kitchen was a layer of hay, poo, etc. Or some such.

That fill looks to be mostly rock and dirt. So my guess is a group of buildings was leveled, creating a layer of stone and wooden rubble, and then some soil was brought from elsewhere (or maybe dug out of a large new cellar) and spread across the top of the rubble before the pavement was laid.

Not to nag, but then how does one explain the intact pots?

"wattle and daub," a phrase that needs sharing. It has potential.