The Elephant Quadriga of Portus

The Vatican Museum has a Roman sarcophagus carved with this interesting relief. 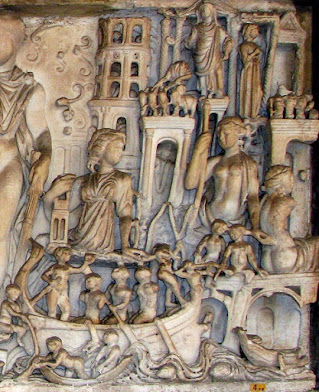 A port seems to be depicted, although as we will see there is some dispute over which port. 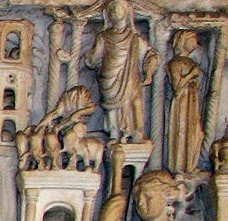 And what is that in the upper right-hand corner? Could that be a chariot pulled by four elephants, standing atop a triumphal arch? 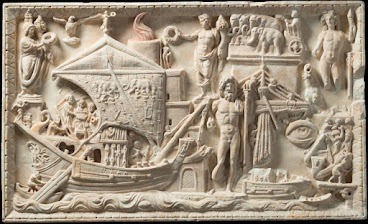 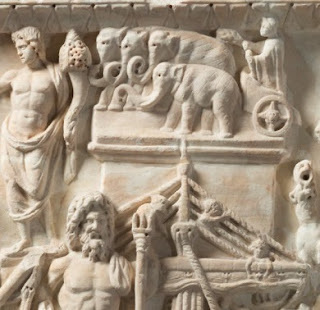 And another relief, this one in the Torlonia Collection. 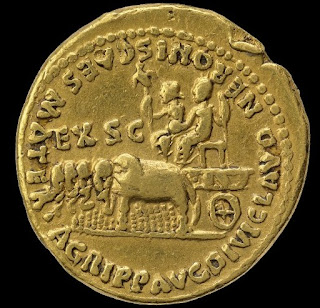 Thus we enter a marvelous little rabbit hole, the Tale of the Elephant Quadriga. This is a gold coin from the reign of Nero, c. 55 AD, showing Claudius and Augustus riding in an elephant quadriga. 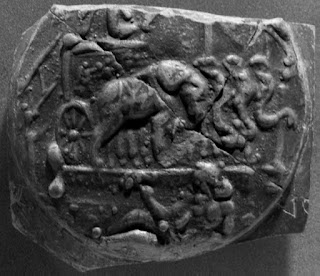 There are quite a few such depictions. So the obvious interpretation is that the Julio-Claudian emperors, those masters of self-promotion and scandalous expense, sometimes rode in chariots drawn by four elephants. However, this is, shall we say, uncertain. There are dozens of coins and other artistic sources, but very few texts, and none that seem really trustworthy.
The clearest textual evidence for such behavior comes from Plutarch's Life of Pompey. Plutarch tells us that in 89 BC the young Pompey

tried to ride into the city on a chariot drawn by four elephants; for he had brought many from Africa which he had captured from its kings. But the gate of the city was too narrow, and he therefore gave up the attempt and changed over to his horses.

I have to say that this does not strike me as an especially reliable source. Pompey was at that point too young to legally celebrate a Triumph, and had been neither a Praetor nor of Consul, so his demand for this honor no doubt struck many older Romans as presumptuous. They would have been looking for reasons to mock him. Note that since he never actually appeared in an elephant-drawn chariot, nobody saw this, so the source would have to have been someone very close to Pompey. Plus, the morality tale is too perfect. In SPQR, Mary Beard is very coy, and never says if she believes this or not.
So far as I can tell, neither Tacitus nor Suetonius ever mentioned emperors being drawn by elephants, and that strikes me as the sort of thing they would have very much enjoyed. If Nero or Caligula had ever ridden in a chariot drawn by elephants, surely some one would have told us? 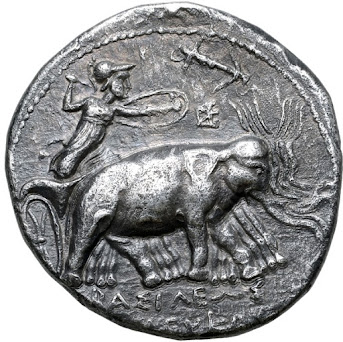 I should emphasize that I am not saying this is impossible; after all elephants certainly can be trained to pull carts. The Romans had plenty of elephants, especially during the late Republic. There are several coins from the Hellenistic kingdoms (above, Seleukos I) that show kings this way, and they really did use elephants on a large scale, so who knows what they got up to. But the formula of the Roman Triumph was very firmly set by tradition, and it specified horses, so I think anyone who wants to argue that some particular Roman actually was pulled by elephants has to prove the case. 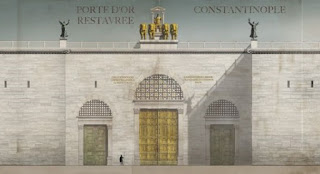 The only other clear textual statement I know about an elephant quadriga comes from much later. Several sources tell us that the Golden Gate into Constantinople was surmounted by a statue depicting Emperor Theodosius in an elephant Quadriga. Byzantine Historian George Kedrenos tells us that this is an accurate depiction of Theodosius entering the city. However, he was writing around 1050 AD and is not considered very reliable about events that far in the past. Also a very weak source, I would say. 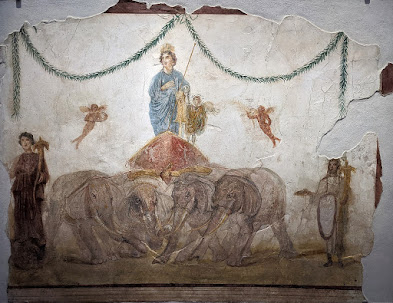 Venus, a fresco at Pompeii
On the other had, we do have a story about Dionysus entering India in a chariot drawn by elephants, and several depictions of other gods and goddesses in this wise. 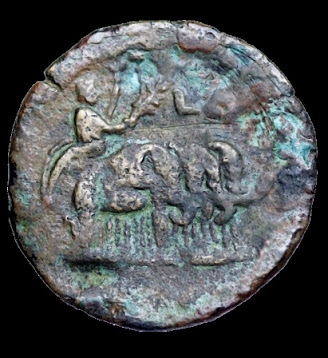 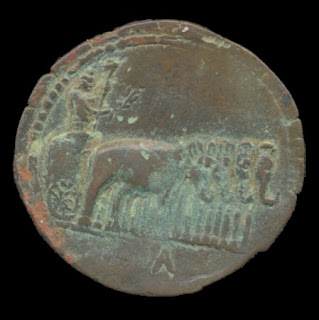 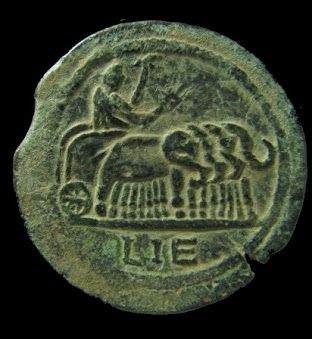 So there is a clue. Another is that most, at least, of the coins depicting emperors in this way were minted after their deaths. Here are three coins showing Trajan in this wise, from the time of his successor Hadrian. So we are seeing, not the emperor in his physical person, but the Divine Emperor, his immortal spirit. So sadly we should probably imagine, not actual emperors riding around in chariots pulled by elephants, but elephants as a characteristics of emperors after they had ascended to godhead. While living they had to make do with horses. 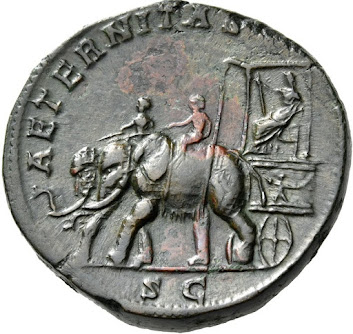 Famous coin showing Diva Faustina, the wife of Antoninus Pius, after her death. 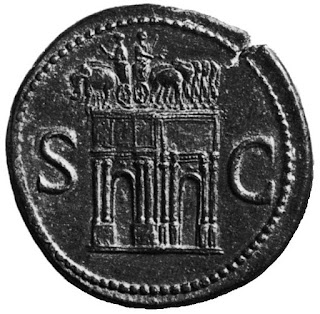 This coin of Domitian probably depicts the Arch of Titus in Rome; Titus was Domitian's brother and Domitian set up the arch c. AD 81 to celebrate his brother's achievements. You can see that in this depiction the arch has an elephant quadriga on top. But there is also a very fine sculptural relief on the arch showing Titus' Triumph, and there he is clearly shown being drawn by horses. I think this pretty clearly marks the distinction between the living man and his divinity. 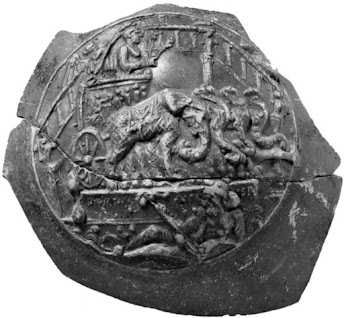 But let's get back to that triumphal arch we started from. You can see by now that more than one such arch probably existed, and for all we know there could have been dozens. But most commentators agree that the construction in those reliefs was in Portus, the new port built by the emperors at the mouth of the Tiber River. This depiction, on a molded ceramic vessel found in southern France, clearly shows the Quadriga against Trajan's hexagonal harbor at Portus.

Compare the depiction of the harbor on this seal. 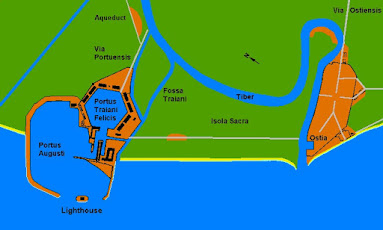 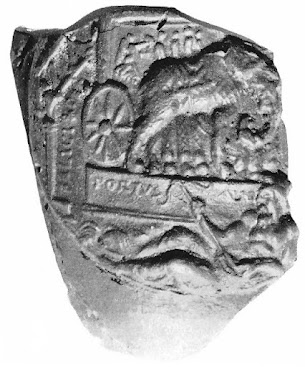 And this image, from another French potsherd, helpfully labels the spot as Portus. The question of who was depicted on the arch inspires more debate. Some think Trajan, since he built that harbor. But it seems the harbor was completed in his lifetime, and Trajan was not the sort of man to violate old taboos against excessive self-aggrandizement. So the most common guess is Augustus. It is possible, though, that the arch was added to the harbor after Trajan's death, and does show him. Many things are possible. 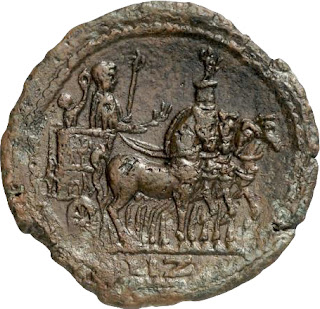 Sometime there is nothing better than following an image on an old coin or relief down a historical rabbit hole, and seeing where the tunnel takes us.
Posted by John at 12:01 PM

The Romans did love to depict their leaders through the lens of religion - especially on their coinage. The textbook example would probably be employing the motifs of Hercules, such as draping emperors and generals in his lion skin headdress or pairing them with his signature club.