The Science of Things Out of Place: Bell Beakers in Eastern Poland 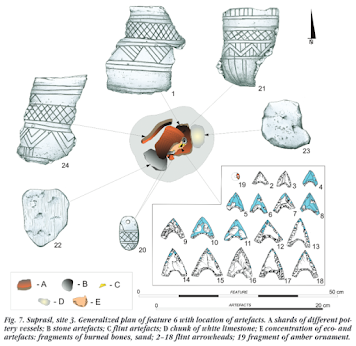 Most of the time, archaeologists find what they expect. On the scale we deal with, people are pretty predictable. But sometimes what we find makes no sense. And sometimes that befuddlement is the gateway to new understanding; Lewis Thomas once wrote that the sound of scientific progress is someone crying out, "that's impossible!" followed by laughter.

"That's impossible!" must have been what Polish archaeologist Dariusz Manasterski said when his crew, excavating on a sandy ridge by a swampy floodplain in eastern Poland, found sherds of Bell Beaker pottery. The Beaker culture dominated western Europe at the beginning of the Bronze Age, around 2000 BC. But Beakers are rare anywhere east of Prague and almost unknown in Poland. 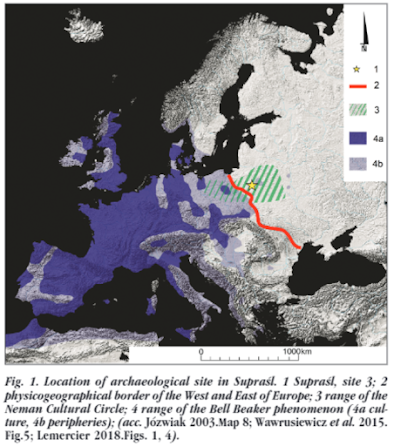 Map from Manasterski et al. 2020. The star marks the Supraśl Site; the dark color marks the range of the Bell Beaker culture. Not only was the Supraśl Site outside the Beaker range, it was in an area of wetlands and poor soils for farming that at the time was still dominated by hunter-gatherers of the Neman Culture (green hash marks). The site itself was surrounded by wetlands, almost an island. It is, however, accessible by boat along the nearby river, so it could conceivably have lain along a trade route. Manaterski and colleagues speculate that the site was an isolated place where religious rituals were carried out in secrecy. 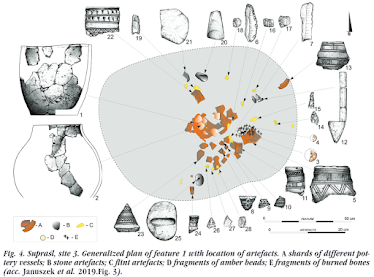 The Beaker artifacts all came from four strange pit features, three of which contained cremation burials. Human bones and ash were found in patterns that suggested they had been in bags, along with carefully selected artifacts. The bags were placed in shallow pits and surrounded by more artifacts. 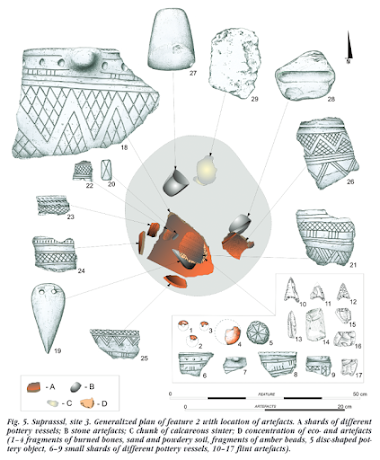 The artifacts were a mix: some local, some made in an approximation of the Beaker style, others perfect Beaker items that look to have been made in western Europe. There were only a couple of whole pots, but a bunch of single, decorated sherds, laid carefully in the pits, which is very unusual. Beaker burials were very strongly gendered, and all of the gendered artifacts at Supraśl were masculine.
One possible explanation would be that four members of this Beaker party had been killed and three bodies recovered. After hurriedly burning the bodies the survivors jumped in their boat and headed back toward safety, searching for a suitable place where they could hold proper funerals. They honored the comrade whose body was lost with a burial spot of his own. But that is of course just a guess. 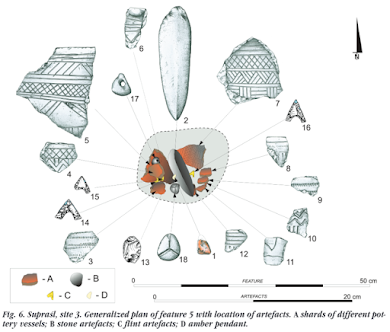 Outside the Beaker core area there are many sites something like this, either lone Beaker burials in areas still dominated by the local culture, or sites with eccentric mixes of Beaker and non-Beaker stuff.
The Bell Beaker phenomenon has always been difficult to explain. They were not a single people; recent genetic studies show that the two areas that have been identified as Beaker homelands, Portugal and the Netherlands, had completely different populations. As the culture spread, its arrival sometimes meant an invasion by people with identifiable genes; in Britain they mostly replaced the Neolithic inhabitants. But in other places, including Italy and everywhere east of the Elbe, there is no evidence of genetic replacement. There the Beakers appear for a while and then disappear. Was it a fad? A religious cult? An attempted conquest that failed? Certainly all the sites where archaeologists find both Beaker and non-Beaker artifacts speak to some kind of mixing, whether cultural, genetic, or both.
The great thing about the Supraśl Site is that it clearly shows people of the Beaker Culture moving through a strange land where the dominant culture was completely different from their own. But who were the people buried at Supraśl? Scouts? Traders? Missionaries? Were they from far away on the Rhine, or were they more local people who had take up Beaker ways?
I love these puzzles, which launch my mind into the distant past.
Posted by John at 9:03 AM

Same designs on pottery as the ones left by Native Americans in late Woodland here in mid-Atlantic.