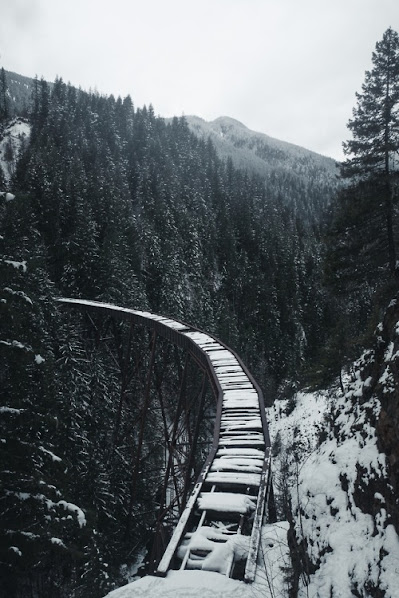 Bridge, photo by Yann Allegre. Dare you to walk across.
Rural communities 'under siege' by criminal hare-coursing gangs

Is putting Harriet Tubman on the $20 bill an antiracist act that honors African Americans, or an insult because it turns black people back into something white people buy and sell? "It is the ignominious relationship of Black bodies to capital and currency that is the cause today of our most violent battles in this country."

A wild snowy owl was seen in New York last week for the first time in 130 years.

You can buy a fake negative Covid-19 test result to help you get on that crucial plane trip.

Long, interesting rant by Shoshana Zuboff about the perils of surveillance capitalism. Even if she is right about how awful Facebook is, I still say Fox News if a much bigger problem, and that only a sternly totalitarian system could keep people with fringe politics from reaching each other online and riling each other up. (NY Times)

Testing out a new giant bell. Best when you turn the volume way up.

How about a classical music playlist titled, "This playlist will make you feel like a 19th-century villain"? Sadly it didn't work for me, but it was still a good listen. Or maybe "studying in a haunted library"? Unfortunately these lists seem to be made by college students who lack a comprehensive knowledge of music history, so they feature only well known works. I'd like to suggest that my friends who do have that knowledge step into the breach here. Become a music curator! I'll help you get started with a link, and suggest cool titles. How about "The hero storms the citadel of the gods." Or "The tormented intellectual confronts fate." Or "Music for a conspiratorial cabal in a Baroque court."

Scott Alexander's long review of anarchist anthropologist James Scott's Seeing Like a State, with many quotations, really great stuff. Which I reread this weekend because it is relevant to his latest essay, in which he defends "Technocracy" against an attack by Glen Weyl. Alexander says that for every famous failure of top-down planning, like Soviet collectivized agriculture, there is a success, like mandatory vaccinations. (There were riots against smallpox vaccinations in 19th-century Britain.) To dismiss all science-driven, top-down government interventions as "technocracy" and therefore bad is just silly.

How one angry woman posted lies online and made life miserable for dozens of "enemies." (NY Times)

Charming 8-minute video of the daily tadpole migration in a small lake.

Testing out a new giant bell.

Weird that they went to all the trouble of designing and building that rig to hold the bell in a way that allows it to swing, and yet didn't bother to motorize it in any way to spare the need for muscle power to actually swing it.

Even assuming they WANT to rely on muscle power for some reason, they also didn't bother to install any handlesm or ropes and pulleys, or anything - but instead just have these guys grabbing onto rough metal corners with bare hands and shoving awkwardly and trying to not lose their balance and fall in the pit because there's nowhere really to stand and still have purchase on the whole contraption? It's just weird and inexplicable that they would so little thought into something that clearly had a bunch of thought put into it in other ways.

Modern America has MUCH more in common with the Gilded Age than just the politics!

I'm afraid Mark Twain would be sorely disappointed with the modern day.