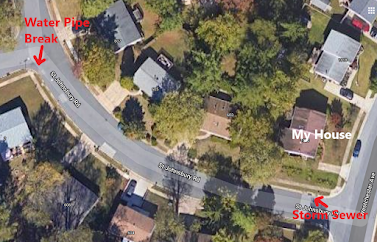 Back in late January we had our first severe cold snap of the year, along with a snow/ice storm. The next day a slowly spreading puddle appeared in our basement. We feared that our sewer pipe had cracked, since that happened to us not long after we moved in and we had to have the concrete floor broken up and the pipe repaired. But the water appeared to be fresh, and the flow did not change with our water use. So the water appeared to be coming from outside. But we had our basement professionally waterproofed 15 years ago and had not had any trouble with outside water since. Very puzzling.

Then we noticed that even after all the snow had disappeared water was still pouring through the storm sewer, which we could hear through the drain next to our house. No sign of where this water was coming from.

Then a few days after that water began bubbling to the surface of the street three houses away and uphill from us, obviously from a leaking water pipe. So that explained the water pouring down the storm drain. Only a slow trickle of water was emerging from under the street, so most of it was somehow getting into the storm sewer.

During that late January cold snap pipes seem to have burst all over Baltimore, and since ours looked like a slow leak and did not cut off anyone's water, it got a low priority. So it was not until last week that they showed up to fix it.

Our basement immediately began to dry up, and now it is completely dry.

"The leak was three houses away, and a whole lot of water seemed to be flowing away through the storm sewer. It didn't make sense to me. Was there enough water to saturate all the ground from the leak to our house? Or was there some sort of underground channel carrying water from the leak to our back wall?"

Well, the storm sewer itself might have a "leak" right near your house. They're basically just concrete sluices, and cold weather stress can cause them to crack and separate just like with a pipe, and allow water into the ground where the damage is.

Which might mean that even with the water pipe itself fixed, you could still have some seepage problems in the future if the storm sewer gets particularly full during a period of heavy sustained rain - although it might require a constant high level flow for it to produce any actual problems, particularly if the sewer damage is at a height that only leaks when the water levels are high enough.