The Strangeness of N.K. Jemisin 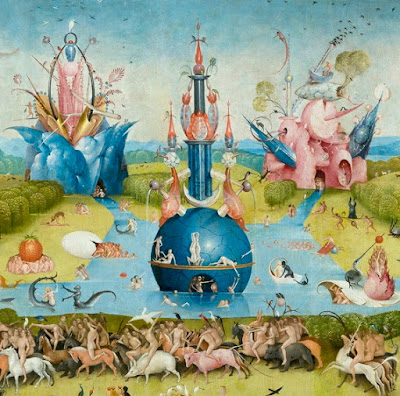 I read my first N.K. Jemisin novel several years ago, after grabbing it off the shelf without any idea who she was. I think it was The Hundred Thousand Kingdoms (2011), but it didn't move me enough to remember it very well. It was ok, just too weird for my taste.

Then Jemisin's Shattered Earth trilogy – The Fifth Season (2015), The Obelisk Gate (2016), and The Stone Sky (2017) – won the Hugo award three years in a row, which no author had ever done before. People raved about it. So I thought that if I were going to maintain my credentials as an expert on contemporary Fantasy, I had better read it. I just finished.

I plowed through the whole thing in three weeks, so I liked it; some parts I found gripping, and at times I couldn't wait to get back to it. But I didn't love it. Explaining why is going to require an excursus on why I read fantasy in the first place.

Once upon a time, I think it was 1991, I set out to hike across Dartmoor in southwestern England, searching for a stone circle. On a rainy, windy, misty November day I got off the bus near a ruined castle, passed by a 14th-century stone church, and made my way up a lane past stone cottages and an orchard of gnarled apple trees. The lane was deeply sunken, worn five feet into the earth by 500 years of foot and ox cart traffic, and for a while I could see nothing but the stone walls on either side. Then the lane ended and I stumbled out onto the moor, blasted by a bitter wind laced with cold rain.

I started walking across the moor on a vague sheep trail. Between the rain and the mist and having to keep my hood pulled tightly around my face I could hardly see where I was going. I just remembered from the map that I was walking around a big hill, so that if I kept uphill to my right and downhill to my left I would be going in approximately the right direction. And so I walked for two hours, no one around but bored-looking sheep, nothing to see but rocky moorland stretching out on every side until it disappeared into the clouds only 50 yards or so away. I started to wonder if I had wandered off the trail, and whether I might miss the circle altogether. And then, suddenly, the mist cleared in front of me and I was staring at a perfect circle of two dozen waist-high standing stones. The whole thing was about 40 yards across, and when the rain picked up a few minutes later I could hardly make out the farthest stones. But there I was, in a mist-shrouded sheep pasture, by a circle of stones set in place more than 5,000 years ago for reasons we only dimly understand. I was overwhelmed with wonder. I felt connected to the earth, to the mist, to the people of long ago, to their stories and dreams, to the cults of forgotten gods preached in lost tongues by priests who turned to dust long millennia past.

I read fantasy in pursuit of that feeling: of awed connection to ancient mysteries. I am not all that picky, and I can be moved by what are really pretty slight invocations of eldritch marvels. But I like fantasy best when it is rooted in old traditions. Mostly of course this has been the European tradition, but I have also enjoyed fantasies based on the lore of Japan, China, voodoo, the Arab lands, and the Silk Road.

To get back to N.K. Jemisin: she is a capable writer with a wild imagination who cares not one bit about the things that move me. Jemisin's fantasies are set in worlds as far as her mind can reach from the actual human past. I confess that when I first encountered this sort of fantasy I was puzzled; why would anyone want to cut away completely from the wonders of myth and history that are there for the plundering? But some people, it seems, are bored with the mythic worlds we inherited and looking for something new and different. If that is your thing, read Jemisin; the Shattered Earth is the best such world I know.

Jemisin – her name is Nora, incidentally – is African American, and this may have something to do with her rejection of old traditions as a basis for her worlds. She seems to regard the European past as something wholly foreign to herself, where the people she identifies with are oppressed or excluded. Instead of inspiring her to look into African or Caribbean traditions, it inspires her to cast off from the past altogether. I think part of the reason she won all those Hugo awards is that many people in America now feel the same way. The past is not of any use to us, even in imagination; it is only something to leave behind.

The Shattered Earth is set on our planet, thousands of years in the future. Once, it seems, earth had a civilization of vast technological prowess, but then something went wrong. Legends call this event the Shattering. In its wake a reduced humanity struggles to survive on a planet where plate tectonics have gone berserk, with a massive seismic event every generation or so. These are called "seasons," and they usually kill millions, reducing the rest to hard-hearted survivors huddling behind stone walls under ash-darkened skies, chasing away raiders and subsisting on the stores they build up in between. They would not survive at all except that certain people are born with the power to control the earth and still some of its rampages. These are called orogenes.

The main human characters of the story are all orogenes of the highest power, able to do things like split continents in half and change the orbit of the moon. All is not well for them, though, because the rest of humankind mostly hates them; some are hunted exiles, others what amounts to well-treated slaves. The story mainly follows three people: a woman with several names, her daughter, and an older man who serves for a while as her mentor. Between them they have the power either to destroy the earth or to restore it to something more stable, and the tension mainly concerns their struggles over which makes more sense and how either might be accomplished.

The thing is, by the end of the story I empathized more with the orogene haters than the orogenes themselves, because the main characters kept losing their tempers and killing people. If you had to live with people whose moon-orbit-altering power was joined to so much psychological instability that whole cities full of humans were regularly blasted, frozen, or turned to stone, how would you feel? The orogenes have reasons for their anger, I mean, people hate them and sometimes try to kill them. But as far as I am concerned, that gives no one the right to exterminate thousands.

There may be a metaphor about the rage of the oppressed, especially mothers' rage on behalf of their abused children. Still.

The Shattered Earth is an impressive creation: original, complex, entertaining. But between my issues with the main characters and my sense of being cut off from any world I understand, I didn't love it and wouldn't have given it any awards.
Posted by John at 10:56 AM

Yeah, I never made it through the first book. Not my kind of read for some of the reasons you mention.

That's a lovely story about Exmoor.