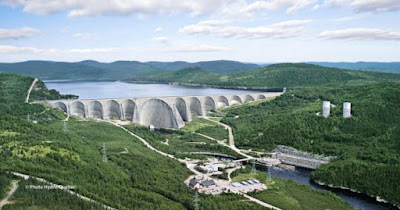 To make full use of solar and wind power, you need storage. Fortunately for the US Northeast, Quebec has already built a fabulous storage system in the form of hydroelectric dams:


Dotted within the sparsely populated forests and tundra of northern Quebec is an existing technology that could hold the key to slashing greenhouse-gas emissions created by powering the dense cities and suburbs between Boston and New York, at the lowest possible price. All that’s needed is a handful of new transmission lines, according to researchers at the Massachusetts Institute of Technology, and the existing network of hydroelectric dams from the Hudson Bay to the St. Lawrence River could serve as a giant battery for the U.S. Northeast.

Quebec’s dams ship some power south across the Canadian border, supplying 15% of New England’s electricity right now. But the energy only flows in one direction, which limits the ability to tap into the abundance of cheap renewable power up north. The key to driving down emissions from both power grids lies in sending electricity back and forth. Solar and wind facilities being built in the U.S. would then help power Quebec on sunny or windy days, giving hydroelectric reservoirs time to recharge. Then, when the sun falls or the wind calms, the Canadian dams would take over.

It’s similar to the system that has evolved between wind-rich Denmark and Norway, which boasts Europe’s biggest hydroelectric system. Denmark ships excess wind power to Norway, and that energy allows for Norway to refill its hydroelectric reservoirs. When Denmark needs more electricity, power flows the other way.

“Denmark and Norway are a postcard from the future,” said Emil Dimanchev, one of the authors of the MIT study.

It's easy to use a hydroelectric dam to store power; just reverse the system and use incoming power to pump water uphill.

But building new high voltage, long-distance power lines is a lot harder; one attempt to build a new line across Vermont was blocked by the state's Supreme Court after a big public outcry. 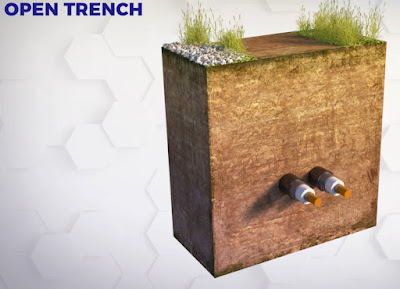 Fortunately, new technologies are coming along that should make it affordable to bury high voltage transmission lines. The general name for this approach is HVDC, High Voltage Direct Current. This was how Nikola Tesla wanted to transmit power, but in his time the engineering just wasn't there. Now it is. Underground or underwater HVDC lines are already widely used in Europe and they are being built in the US right now. They are no uglier or more disruptive than a pipeline, so they are a lot easier to build. When you factor in the cost of having to fight for your overhead line all the way to the state Supreme Court, as often happens, they are price competitive. As these new lines spread across the country, it will become much easier to tie different energy sources together, making green power ever more dominant. The image shows the configuration being used for a new line in Iowa and Illinois (2 eight-inch conduits in a trench 3 feet wide by 5 feet deep), which will carry as much power as a set of six overhead lines on big towers.
Posted by John at 8:21 AM