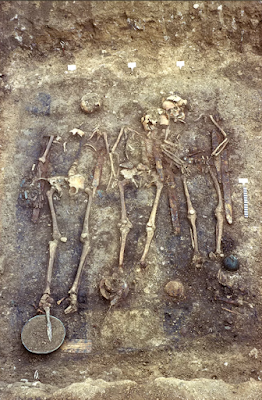 DNA from ancient bones has opened up many new avenues of research. One that has not yet gotten a lot of attention outside the profession is analyzing the family relationships of bones from cemeteries. For example, certain elite graveyards have been thought to be the burial places of particular royal or aristocratic families, and the study of DNA can sometimes show whether this is true. This approach was recently taken by Irish and German archaeologists to a famous graveyard from the early Middle Ages. 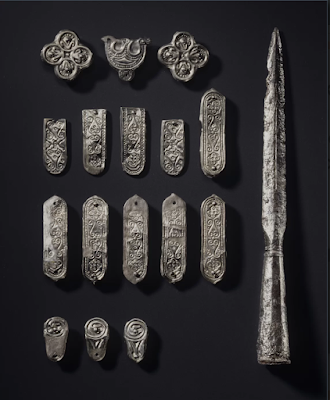 The thirteen warrior burials at Niederstotzingen, in southern Germany near the Danube, were made between about 580 and 620 AD. They were excavated in 1962. The excavators thought these were from the elite of the people known to the Romans as the Alemanni. The spectacular grave goods seem to represent a variety of backgrounds, however; some look Frankish, some like objects from Lombard Italy, while some like the helmet below are imports from Byzantium. 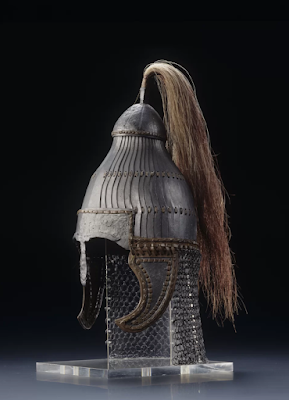 Mitochondrial and Y chromosome DNA was extracted from 11 burials, and it represented two distinct Y-chromosome lineages but nine different mitochondrial haplotypes. This means that the men were more closely related through their fathers than through their mothers. So this was a patrilineal or at least a patrilocal clan. 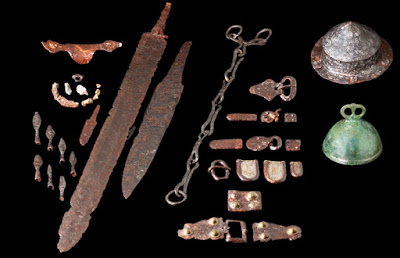 Sufficient DNA for full genome analysis was extracted from eight of the burials, all men. They showed that five were closely related; likely all first cousins or closer. These were all from the same Y-chromosome lineage. But the other three were from a different lineage and were not at all related to the first five; in fact they seemed to be from different populations altogether. Two seem most closely related to people from Italy. 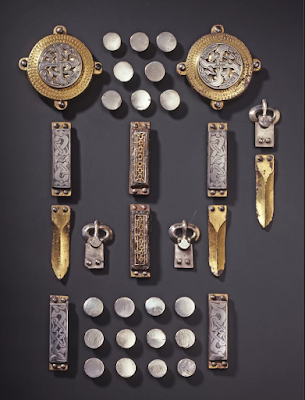 The excavators did not note any particular association between the genetic background of these men and the grave goods they were buried with; the most Frankish and most Lombard looking artifacts were found with two men of that closely related family. Perhaps, they suggest, this was a matter of personal style. Or it might, I add, represent difference in where they had been or under whom they had served, since luxurious weapons and armor were in that society frequently given by lords to their most noble and useful followers. 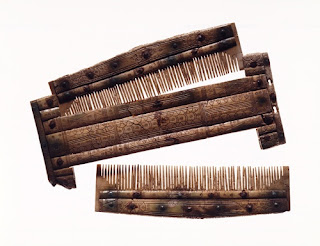 As to why three unrelated men were interned in this family graveyard, the investigators suggest that they were adopted into the family from outside. We know from written records that sons from one noble or royal house were often sent to be raised in another. Sometimes this was a way of strengthening relations that were already good, and sometimes it was more like taking hostages, with every shade in between. To bury an unrelated person in your family plot seems like it should have been a sign of a very strong relationship indeed: as the investigators say, "kinship and fellowship were held in equal regard." So perhaps both the diverse styles of metalworking and the diverse genetic backgrounds show us that this was an internationally connected clan, with both household members and weapons from Lombard Italy at least, and possibly other kingdoms as well.
Posted by John at 10:48 AM