The Number of "Disabled" Non-Workers is Falling; What Does that Mean?

One factor was a steady increase in the number of people not participating in the labor force because of health problems or a disability. In 1994, the Bureau of Labor Statistics determined that 4 percent of Americans 25 to 54 were not seeking work because of those reasons. By mid-2014, the number had risen to almost 6 percent of that age group.

Economists were especially alarmed because the increase appeared tenacious. It was rising before the 2001 recession, rose faster in response to the 2001 and 2008 recessions, then kept rising during the subsequent recoveries.

But then it began to fall: slowly at first and then, beginning in 2016, faster. Over all, the number of prime-age people who cite disability as their reason for not working has shrunk by 7 percent since mid-2014.

When the economy is really humming, even many people who consider themselves disabled can find work.

Which raises a lot of questions about what "disabled" means. I see this as a big problem for America moving forward. I think we absolutely need a government program to take care of people too sick or handicapped to work. But on the other hand the perception is growing that disability is a scam, and all of us have heard stories about people who could work but decide not to. If this perception continues to grow, the program could be threatened – Trump's latest budget proposes a modest cut – which I think would be a disaster.

I have the sense that many working people in America could qualify for disability payments but choose to keep working despite the hardships. After all, disability does not pay as well as any sort of decent job – the average payment in 2017 was $1171/month – plus many people would rather work than endure the shame/stigma of living off disability payments. At the other end there is work that even severely disabled people can do. So disability exists on a continuum, from people who would have great difficulty finding any sort of work, to people who could work but with pain and exhaustion, to people who are well within the norm for the working population but decide for whatever reason to seek disability instead. 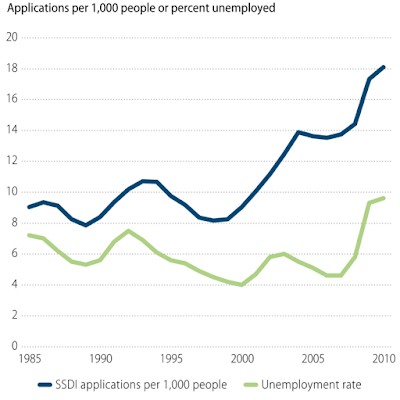 And what might that reason be? I think this chart from Forbes provides a clue. You can see that disability applications track the unemployment rate fairly closely. It seems that many people decide to apply for disability after they lose their jobs, or perhaps when they give up searching for a job because conditions are too bleak.

To get back to the continuum I mentioned: I think the variables that determine whether a person seeks disability include the availability of work, how well that work pays, and what sort of work it is. People will endure a lot of discomfort to do a job that provides decent pay and status, or that they enjoy or find meaningful. They will put up with a lot less to be abused by the boss at minimum wage.

Personally I don't have any problem with this. If the existence of programs like Disability Insurance make it harder to hire people for lousy jobs at miserable wages, well, great! In a society as rich as ours, I don't think anyone should have to put up with that just to exist. But I understand why other people disagree; after all it can be galling to see people getting paid not to work when their health problems are no worse than your own.

One of the effects of disability insurance is probably to keep more people in regions with fading economies like coal country or factory-less factory towns. For a fifty-year-old person with a bad back, taking disability may seem a lot simpler than moving to a new city to start over. As a result, areas like Appalachia and northern Maine have disability rates up to twice the national average. If there has been a national conversation about this, I have missed it, but I think it is worth having: how hard should be try to get working-age people move to places with more jobs? Should we pursue policies that may drive certain communities to extinction, or should we consider programs like disability insurance a lifeline to keep struggling towns alive?

All of this seems very complex to me; how would you go about writing a set of rules that provide help to those who really need it but don't encourage slacking? Beats me. But I would rather see the effort put onto the carrot side, luring people back to work with a higher minimum wage and better work rules, than threatening to cut them off.
Posted by John at 8:30 AM