Wolf Crazy: in California, Mad for OR7 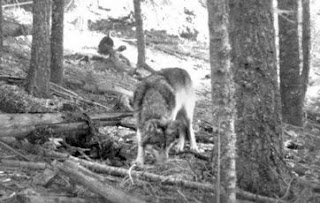 A GPS-collar wearing wolf known to biologists as OR7 has become a celebrity in California. OR7 is a young male gone wandering, as many young male predators do, looking for his own territory and mate. On December 28 he crossed into California and became the first wolf to live in the state in 88 years. (That's him above, back in November.) This has launched a little media frenzy of news reports, and a contest to give him a name -- "Journey" was the winner. Now he has at least two twitter accounts, one of which, WolfOR7, has this for its profile: 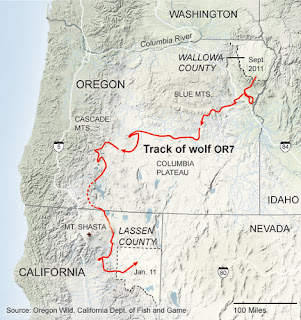 
This deep snow is an elk-chaser's dream. Didn't need/miss the pack today. You haven't lived until you've dined on elk liver.

Why is everybody so worried about my love life? 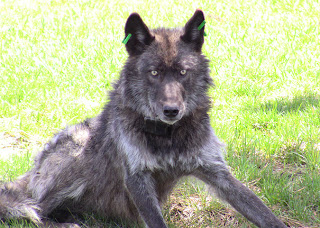 I have mixed feelings about all  this. The picture above is OR7's father, the alpha male of the Imnaha pack, with tags on both ears and his own GPS collar. He looks like anything but a wild wolf. And, in truth, these animals are not truly wild, but "managed." 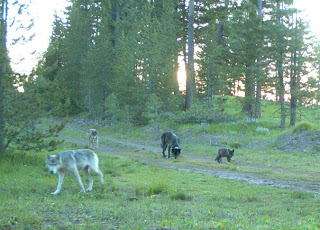 Wolves are exciting. They represent the wild in its pure, dangerous form, and of course people are thrilled to hear that there are wolves back in California. As wolves slowly spread across the Rocky Mountains -- according to the Fish and Wildlife Service, there are now 1,651 in the region -- something wonderful that was lost is coming back. The picture above is the Imnaha pack: alpha female to left, alpha male in center, juvenile in back and a pup to the right. This is a healthy wolf pack, breeding and increasing their numbers.

But even in the remote country of northeast Oregon they have to be carefully tracked. The wolf recovery has been managed by people at every step, under the terms of the Endangered Species Act. This law is bureaucracy in its most maddening form, hated by timber companies, miners, and anyone who wants to build anything in some parts of the country. The recovery of the American wolf has come at a real cost, tens of millions of dollars in direct government expenditures and at least as much by people struggling to comply with the ESA. I think it has been worth it, and I think most Americans agree. Wolves have recovered so well in the Great Lakes region, with more than 4,000 in Minnesota, Wisconsin and Michigan, that last month that population was removed from the Endangered Species List. Wolves may soon be delisted across much of the Rocky Mountains as well.

Delisting will reduce the paperwork burden but it won't end the conflicts between wolves and people. This is and always has been a troubled relationship, especially since humans started raising sheep. Wolves love sheep, which from their perspective are fat, juicy meals too stupid to run away. They will attack cattle if they catch one alone. They also kill dogs. They don't attack people very often but it can happen, and they make parents very nervous.

So the management of wolves will continue -- tracking collars for selected animals, population studies, shooting of individuals and even whole packs who get the habit of sheep stealing. The world has become too crowded, and our expectations of safety too high, for us just to leave wolves alone. Like many environmentally-minded people I sometimes fantasize about creating immense national parks spanning whole states -- Wyoming, anyone? -- where animals could really be wild. But that won't happen. Instead we will continue to live together with animals, and they will not be truly wild, any more than the twitter-celebrity OR7 is.
Posted by John at 8:03 AM