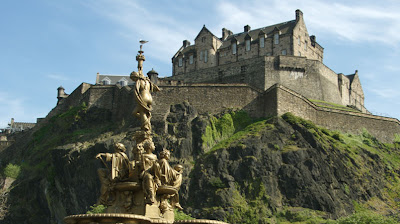 The Scottish National Party dominates Scotland's Parliament, and they would like for Scotland to become independent of the UK. The main issue holding up independence is money, or, more specifically, what sort of currency an independent Scotland would use. The old plan was to use the Euro. (The Scots are generally more pro-European than the English.) But with the Euro still in crisis and dragging down the economy of Europe with it, nobody is very enthusiastic about that right now. It has recently been suggested that Scotland would form a currency union with Britain and keep using the pound. Alas, this does not avoid the Euro's fundamental problem, of countries with independent economic policies sharing a single currency  -- not to mention that the British Exchequer has no particular incentive to help the Scots make such a union work. Scotland could, of course, create its own currency, but since the Scottish government has no fiscal track record investors would probably distrust their currency, imposing real costs on the Scottish economy.

Another issue that looms large now, but which I assume will be worked out in the long term, is that the UK just bailed out Scotland's two biggest banks at a cost that could come to £70bn. In London they think Scotland should take on that debt, while in Edinburgh they say the banks failed because of poor regulation from London, so the English should pay the price of their own crony capitalism.

I have to say that I am deeply puzzled by nationalism in general and the desire for Scottish independence in particular. The Scots willingly joined Britain back in 1709, by a vote of their own Parliament, so it's not like union was forced on them. They already have their own national sports teams, and they control the education of their children. I just don't see what they would gain from formal independence that would be worth the heavy economic cost of separation, calculated at around £2600 per person per year (more than $5,000). Without London to bail out their banks, Scotland would now be facing the same kind of bankruptcy as Ireland and Iceland. Yes, Scotland has a wonderful history, but some of the best parts -- the Scottish enlightenment of the eighteenth century, the engineering achievements of the nineteenth, the bravery of their soldiers in helping to defeat Napoleon and Hitler -- came while they were part of Britain. Why does local pride require political independence?
Posted by John at 11:13 AM