An Ordinary Tenant Cabin at Antietam, 1862 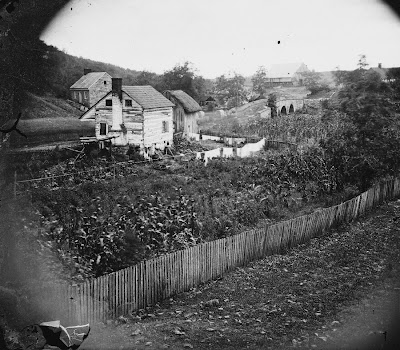 Studying the Civil War can get depressing -- so much death, and so many blunders by all concerned that had the effect of stretching the war out for four long years. Antietam is particularly depressing in this way. Lee, spoiling for a fight, deployed his outnumbered men in a weak position, inviting attack by a Union army that outnumbered his 2 to 1, apparently because he felt such scorn for McClellan that he thought he could beat him no matter the odds. Even as his own position was near to collapse he was trying to organize a counter-attack that would have been even more disastrous than Pickett's Charge, had Stonewall Jackson not been able to talk him out of it. But if McClellan was weak, many of his officers were not, and they led the troops McClellan let them take into the battle to the verge of a great victory. Then, when commitment of one of McClellan's two reserve Corps would have sealed that victory and driven the Confederates from the field, McClellan refused, taking one of his pompous poses and saying, "you forget, Gentlemen, that I command the last reserves of the Republic." (Which wasn't even true.) So a day that began with Lee arrogantly exposing his men to Union attack ended, after 3500 on both sides had been killed, with McClellan shamefully refusing to claim the victory his men had won for him. 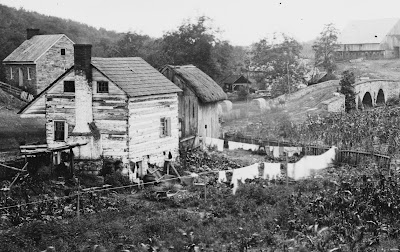 But one thing I always like about battlefield studies is the window they open into nineteenth-century America. You might be surprised to learn how few descriptions we have of how ordinary people lived just 150 years ago. Before 1860, most of our best accounts were written by foreigners. People wrote about their own lives, or about what seemed interesting or exciting to them. Since few of the diarists and letter writers were poor, we don't have much in the words of poor Americans. And since poor folks were just part of the landscape in which people grew up and lived, nobody bothered to describe their homes and ways of life. Unless, that is, they were far from home, and things were different than what they were used to. In the letters of Civil War soldiers, preserved because of the momentous event they were engaged in, are thousands of descriptions of the people, customs, houses, and farms of they places they were sent to fight. A sample of one of my favorites, written by a Sergeant of the 13th Massachusetts in Stafford County, Virginia:


The house was simply a log house about 15 feet square, containing one room with a door on either side; for a window there was a hole about two feet square with a sliding board in the inside to stop it up when needed. The fireplace and chimney were built on the outside of the house of sticks and mud in regular Virginia style. In one corner of the room on the opposite side from the fireplace stood the family bed. In the corner on the left of the fireplace stood a table, in the center of the room was a bench about four feet long, used for a seat, and there was two chairs without backs, or stools; I have forgotten which. When we entered Mr. Bullard sat on one, and Mrs. Bullard sat on the other, while the five children, the eldest a girl of fourteen, sat on the bench or floor. On being introduced Mr. Bullard arose, shook hands, and invited me to take a seat, offering at the same time his stool. Mrs. Bullard arose, courtesied, and resumed her seat. Declining with thanks Mr. Bullard’s offer of his seat, I said, “I would sit with Haskell on the bench.” We sat facing the fire; the children were scattered promiscuously around. I not noticed why Mrs. Bullard sat so near the fire; she was preparing a meal for them, and the pot was over the fire in which was their “pone cake”, also a frying pan in which, swimming its own fat, was the ever to be found “smoked sides.” On the hearth were two old tin cans (such as the boys had bought can fruit of the sutler in) in which she was making coffee. Mr. Bullard was chewing tobacco, and spitting into, or rather towards the fire, and as he sat some distance away, many were the times that he failed of his mark and there was stream between him and the fire. 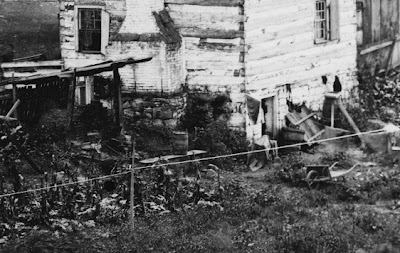 Likewise there are few photographs of ordinary houses and farms, except that there are hundreds of photographs of the places where Civil War battles were fought. So the houses of poor folks that happened to lie in the path of armies have been documented for us by photographers interested in something else. Because the glass plate negatives used by those photographers preserved so much detail -- when properly focused and lit -- houses that are just blobs in the corner of battlefield vistas can be blown up to show the details of life. Like in this picture of the Middle Bridge over Antietam Creek. In the yard of this little tenant house, the home of some otherwise unknown family, you can see the tumble-down lean-to, the wheelbarrow, the weed-infested garden, the laundry on the line, and a hundred other items that make nineteenth-century life real for me in a way that nothing else does.