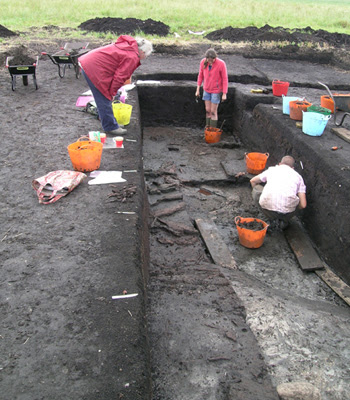 Starr Carr is a Mesolithic camp site in Yorkshire, England, dating to 9000 to 8500 BC. The site was first excavated in 1949, and you may have learned about it if you ever took an archaeology course. Excavations resumed in 2006, and new trenches were opened. In one of these the excavators reported finding Britain's oldest house (above), which was round, the roof supported on posts driven into the soft ground. The house measured about 3.5 m (11 feet) across. 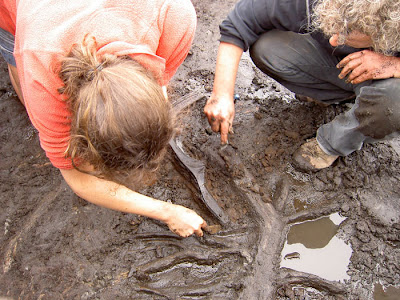 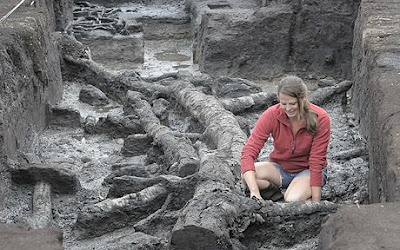 The remarkable thing about the site is the preservation. The camp was along the boggy shore of a now-vanished lake, and the waterlogged conditions preserved large quantities of wood and bone. In the picture above you can see how much wood there is in the wet parts of the site. 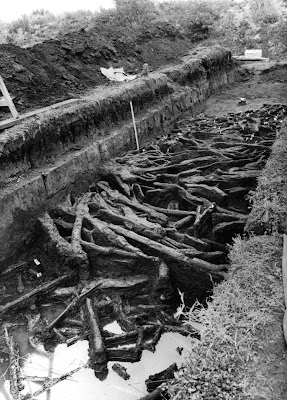 For unknown reasons, the residents so wanted to be at the lake shore that they built wooden platforms like the one above, shown in a photograph from 1950. The original interpretation was that the residents lived on these platforms, but at the time only the wet part of the site had been dug. Excavations in the higher, drier parts of the site show that the residents likely spent more time up there. So what were they doing on the lake shore? Not fishing, since no fish or turtle bones have been found.

Sitting on those platforms, they spent a good part of their time working antler into tools and weapons. More than 200 barbed antler points like the ones above have been found at the site. But if the site was a workshop for making bone and antler tools, why not put it on higher, drier ground? 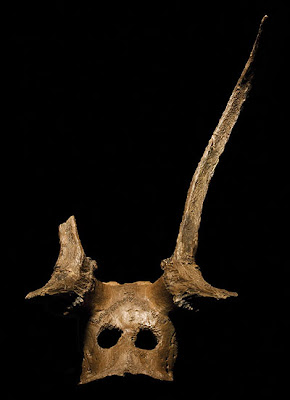 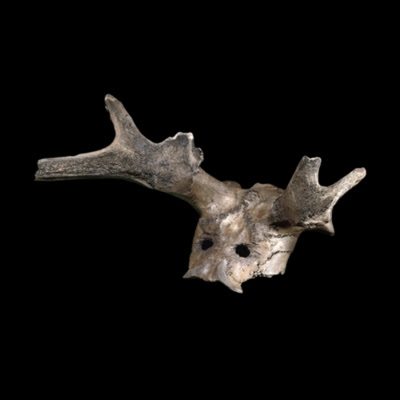 Even more intriguing are these antler "frontlets", or forehead masks, 21 of which have been found at the site. Were these headdresses, or decorations? If they were headdresses, were these used to sneak up on deer, or were they for ritual purposes?

The site is amazing, but like most archaeological sites it raises as many questions as it answers. The desire of prehistoric Europeans to live in wetlands -- Starr Carr, the Alpine like villages, the Crannogs of Ireland -- is puzzling, the antler frontlets are an intriguing mystery, and you have to wonder, after seeing how much wood and bone is present in this bog, about all the material that has disappeared from sites where only stone remains.
Posted by John at 12:37 PM