Skeletons in the Foundation 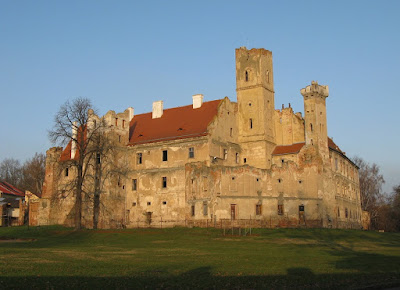 Archaeologists exploring the oldest foundations of Břeclav Castle in the Czech Republic found something interesting. 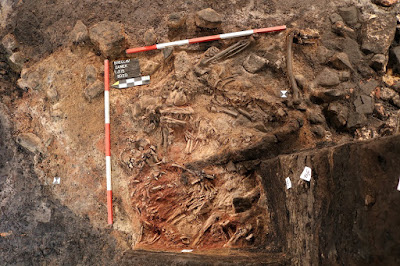 Three bodies, all obviously buried within the foundations when they were built in the 11th century. From the position of the skeletons the excavators thought they had been tied together. They were placed on top of the first layer of stones at the bottom of the wall, a careful placement that pretty much rules out an accident.

This habit of burying sacrificial victims in new building foundations was common around the world for thousands of years. But I wonder, how was it preserved in Moravia into the 11th century? The area had been Christian for at least 200 years, and the builder, Duke Bretislav I of Bohemia, was a champion of the church who had saints in his family. Who passed on this tradition, and how? And what else were they passing along?

And who were the victims? War captives? Criminals?

Weird and fascinating. Via The History Blog.
Posted by John at 9:33 AM

"This habit of burying sacrificial victims in new building foundations was common around the world for thousands of years. But I wonder, how was it preserved in Moravia into the 11th century? The area had been Christian for at least 200 years, and the builder, Duke Bretislav I of Bohemia, was a champion of the church who had saints in his family. Who passed on this tradition, and how? And what else were they passing along?"

Mexico has been "Christian" for at least four hundred years, and yet we still have huge numbers of ostensible Roman Catholics who actively worship The Virgin of Guadalupe, Santa Muerte, and other syncretic figures that are fundamentally pre-Christian in nature. And that's not even including the indigenous peoples who never adopted Christianity at all!

In our own society, we ostensibly observe the "Christ Mass", but our modern rituals for that holiday borrow far more from Pagan traditions than from Christian ones!

We burn pagan Yule logs in our fireplaces;
We hang pagan wreaths on our doors;
We continue the pagan tradition of "wassailing" and singing carols;
We kiss under sprigs of mistletoe symbolic of Frigga, Norse goddess of love;

We await the arrival of a figure we call "Saint Nicholas" but whose modern depiction has far more in common with Odin than his namesake who lived in the pre-Christian Roman Empire; and we anticipate his arrival by listening for the sound of reindeer (native to Scandinavia) magically pulling his sleigh through the air - eight of them, to be exact, clearly paralleling Odin's magical flying steed Sleipnir, the eight legged horse.

Honeastly, is it really so hard to imagine that pre-Christian beliefs and rituals persisted for centuries in Bohemia (and many other places!) as common and regular folks practices, despite the Christianization of the ruling nobility?

I see this exact baffled reaction all the time among historians who seem to think Christianity somehow magically wiped the slate clean as it spread through Europe, despite the mountains of evidence which flatly contradict that notion. That's not how any other religion has ever worked when it spread into new regions and supplanted the old beliefs, so why in the world would Christianity somehow be different or special in that regard?

No culture ever wholly abandons their old religion overnight, or even within a half dozen generations. It's a gradual and incomplete erosion at best, and it often works in both directions - Christianity didn't erase pagan beliefs, it absorbed and repurposed them, creating a new syncretic faith with major differences from what Christianity looked like in earlier centuries!

Duke Bretislav may have been the most Christian man in all of Bohemia when he built this castle... but he didn't actually build it, now did he? He ordered it to be built, but he himself wasn't personally overseeing every stage of construction. He hired ordinary laborers from the common people to do the actual work, and it's not at all unreasonable to think that some (or even many) of them still held pagan beliefs and practiced pagan rituals, even two hundred years after the first Bohemian king officially converted. They may have performed a rite of their own volition, without Bretislav even being aware of it. It's perfectly plausible, and follows Occam's Razor.

All true, but human sacrifice is a different level of pagan survival; the church was very hard on that everywhere and stamped it out for example in central America. Plus it was not something done every day, but only when a major building or bridge was constructed, so fewer opportunities to pass on the tradition.

The church stamped out human sacrifice in Central America half a millenia later, under wildly different circumstances.

Moravia in the 11th century simply doesn't compare to New Spain in the 16th century.

It wasn't the victim of introduced diseases that killed off 95% or more of the native population. Its slavic population were ruled by other slavs, not total foreigners with a history of racism, xenophobia, and violent zealotry. The Christian religion was willingly accepted there over the course of several centuries, not forcibly imposed over decades. The local church was Eastern Orthodox, not Roman Catholic, and had substantially different priorities. The local economy and government was built on a feudal system that stretched back centuries and interconnected with the rest of Europe, not on the brutal and exploitative Spanish encomienda system that was newly built and upended the old ways.

New Spain was literally the site of an apocalypse. Everything changed. The old way of life collapsed utterly and was wiped from the face of the earth. Almost everyone living died, and those few that survived were subjugated by unimaginably different foreigners who imposed an entirely new and different society onto them. The effective means and compelling motivation to hold on to the practice of human sacrifice in the face of such radical change were largely nonexistent.