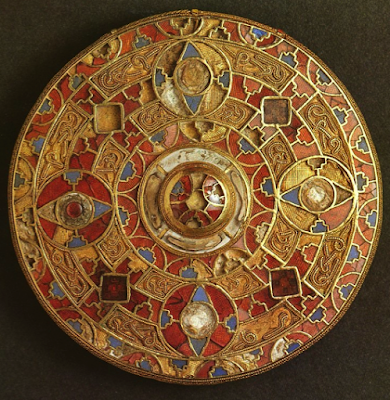 Peter Wells is one of the leading archaeologists of early medieval Europe, and in Barbarians to Angels (2008) he tried to sum up the main things he had learned over the course of his career. It's well written, short, and has some good material. Too bad it's wrong.

Wells is from the "there were no Dark Ages" school of history, and he devotes most of the book to showing you all the great stuff that was happening in Europe between 400 and 800 AD. Which is fair enough, I mean, lots of stuff did happen in Europe, including the growth of new towns across the north, the spread of some key technologies like moldboard plows and window glass, and the creation of the amazing artistic vision we call the Insular Style. I recognize that my preference for the stuff shown in this post over classical marble is a matter of taste, but you have to admit that this is an amazing breath of fresh air after a thousand years of satyrs chasing nymphs.

But there is also clear evidence of decline, from abandoned agricultural fields in Wales to a dramatic fall in the amount of airborne lead incorporated into glaciers in Greenland. Roman Portus, the huge port complex that supplied the city with grain, was destroyed and abandoned by 550; Rome itself shrank from around a million people under Augustus to perhaps 20,000 in 600. (Wells flat out ignores that collapse by ending his account of post-Imperial Rome in AD 450 when it was still a thriving city.) 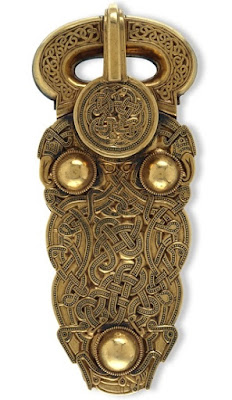 Wells admits that the early Middle Ages were different from classical times. This is a very important point that I want to emphasize. Even though Wells thinks there was no overall decline in the population of Europe or its economic activity, he agrees that things had changed in important ways. The elite of northern Europe was no longer looking to the Mediterranean for its models of how to dress, act, or educate its children, but to a broad "barbarian" culture; Wells lists a dozen very similar royal burials from around 500 AD that stretch from France to the Crimea. These warrior kings did not simply replace the old Roman elite and go on as before; they radically changed what it meant to be a leader. No more studying Homer or learning rhetoric; instead they listened to heroic lays and practiced sword fighting. 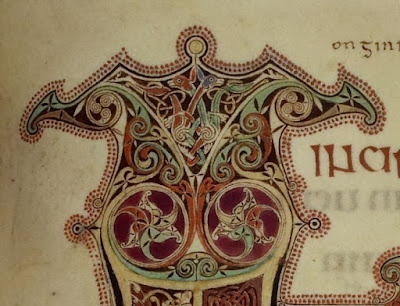 Where I think Wells is silly is in his insistence that the changes taking place across Europe were in no sense a "decline." Take, for example, his account of post-Roman London. After around 270 AD the thriving provincial capital changed:


Beginning in the third century and continuing into the fourth, there is clear evidence for major changes in what people were doing in the city. Two changes are particularly evident, one involving the reuse of stone architectural elements, the other the deposition of soil over much of the formerly built-up urban area. . . .

Some large public structures built of stone were allowed to fall into disrepair, whereas others were carefully taken down, apparently for re-use of the stone elsewhere. Some of the stone was employed for building a new wall along the north bank of the Thames. (109)

Other stones from old public monuments were built into the houses of wealthy families. 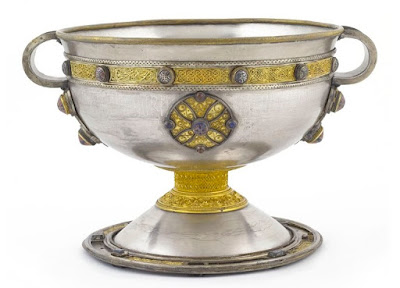 And then there is the Dark Earth:


The third and fourth centuries at London are characterized by the widespread presence of dark humic soil, sometimes more than a yard thick, and with cultural debris (pottery, bones of butchered animals, glass fragments) mixed into it, covering occupational remains of earlier centuries. This material, known as dark earth, is not unique to London but has been identified at many urban sites all over northern Europe. . . .

The dark earth is now thought to represent not abandonment but rather thriving activity — but activity of a very different character from that of the Roman urban centers. The dark earth has been found to contain remains of timber-framed, wattle-and-daub huts, along with sherds of pottery and metal ornaments datable to the late Roman period. These observations demonstrate that people who were living on the site were building their houses in the traditional British style rather than in the stone and cement fashion of elite and public Roman architecture. (111)

So what happened in London, and many other Roman towns across Europe, was that grand public buildings were abandoned or torn down and people built wattle and daub huts within their ruins. Now ask yourself: what does the build-up of three feet (1 m) of humus in 200 years tell you? It tells you that nobody, ever, during that whole period, hauled any trash outside the walls. All of it – animal bones, oyster shells, hearth ash, shit, demolished huts (wattle and daub structures last only a decade or two), and whatever else people and their animals produce, was just left to molder away right next to where people were living. Even Neolithic householders were more careful with their trash than that.

And what does Wells say about this?


To call these changes "decline", "collapse," or "abandonment" is to adopt a conservative Roman attitude toward change. (112)

If you object to a town full of people who never haul away their trash, you must be a conservative Roman.

That was probably too harsh, because Wells has put his finger on something important. Across much of Europe we find that Roman citizens, rather than defending the empire against barbarian invaders, welcomed them into their towns and handed over the local Roman officials to the Franks or the Goths for execution. There were also widespread revolts against Roman rule, notably the rising of the Bacaudae that raged for decades across western France. Roman patriotism was in short supply.

That was partly because the Roman empire was in a bad state. Our best source on this is Ammianus Marcellinus, whose narrative of the years from 353 to 378 is a sad catalog of civil wars, treason trials, corruption, incompetence, and more treason trails, culminating in the crushing Roman defeat by the Goths at Adrianople. After reading it my students are always amazed that the empire survived as long as it did. Reading about the way many in western Europe welcomed their new barbarian overlords makes me think that for many people the empire was no longer worth it: why keep paying taxes to a state that can't provide justice or defend its frontiers?

And if the empire wasn't worth it, maybe the rest of Roman civilization wasn't worth it, either? Why keep spending money on marble law courts where you didn't trust the judges, or marble statues of leaders you despise or can't name, or libraries full of books you can't read?

I do not think that such a shift in attitudes can explain everything that happened in western Europe in this period. As I said, I think there is strong evidence for real decline. But it does seem to me that many people just got tired of classical civilization and were ready for something new.
Posted by John at 7:31 PM

Very interesting. In the image of people living among their own filth, one gets a sense of id released. I wonder how cleanliness was enforced in Roman imperial cities. Perhaps there was a great driving-out of such officials.

The slow but powerful re-regulation of society is one of the great stories of later centuries. Some of this comes from rulers, the kings and priests and school proctors all that, but much of it comes from local people, small-community councils, etc., who want to identify places to put things and then make sure the things get put where they go. Who is it who oppresses you? Start with you neighbors.

After all, I wonder what would be the fate of someone who kept their house too clean or tried to roof it with snug tiles in 6th-century London. "You think you're better than us?" Oppression goes every which way.

(Damn, the captcha AI is back.)