David Anthony, "The Horse, the Wheel, and Language" 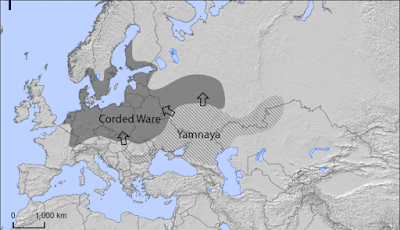 This review is going to be one of those where I tell you what this book says so you don't have to read it. Because while it is full of information, it is zero fun to read.

The Horse, the Wheel, and Language: How Bronze Age Riders from the Steppes Shaped the Modern World came out in 2007, just a few years before paleogenetics revolutionized the study of the European Bronze Age. It presents the archaeological case for the theory that the Indo-European languages were spread by Bronze Age people from the eastern European steppes who had mastered horse riding and lived at least partly as nomads. Their culture is called by archaeologists Yamnaya. I wanted to read the book because it is the most thorough treatment of this evidence in English, and because I wanted to see what sort of arguments dominated the field before genetics trumped them all. 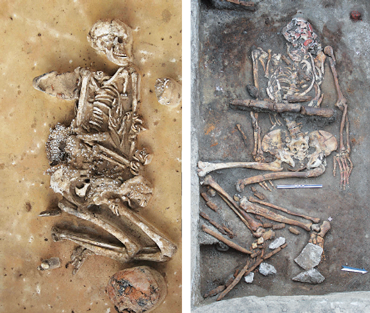 As I have mentioned several times before, it is really hard to write about archaeology. Archaeological arguments turn on questions like how much one set of pots resembles another set, how different one way of making stone arrowheads is from another way, and whether cultural change in a region is sudden or gradual, and to really answer  these questions you have do dig deep into the muck of pottery decoration, flint knapping, the calibration of radiocarbon dates, and the like. Plus, we have no idea what the people we study called themselves, so we dream up names for them based on the archaeological sites where they were first found. In Eastern Europe these are unpronounceable mishmashes like Starčevo–Körös–Criş or Krivodol-Sălcuţa-Bubanj. These days archaeologists are also very interested in climate change over time and thus our work fills up with arcana like Bond Events and the Piora Oscillation.

The basic problem with David Anthony's book is that while he tried to make it accessible to non-archaeologists he was unwilling to jettison the vast weight of archaeological terminology, I suppose because he also wanted it to seem professional to his peers. So a lot of the text looks like this:

So, anyway, what does archaeology tell us about those Bronze Age steppes people who had such a huge impact on the future of Eurasia? 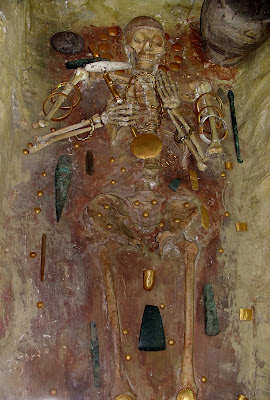 First, they arose in a connected world, with trading links that spanned hundred of miles (at least). In particular they were connected to nearby farming peoples, especially the fascinating cultures now commonly called Old Europe. From around 6,000 to 4,000 BC parts of Southeastern Europe were occupied by people who built large towns with impressive walls and buried their leaders with impressive assortments of copper and gold. (Burial from Varna in Bulgaria above.) 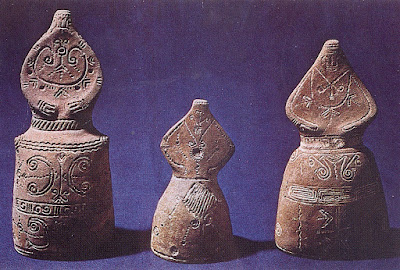 They made charming figurines of women or goddesses in fancy dresses and other cool things.

The genetic ancestors of the Yamnaya people were mostly the foragers who had lived in Ukraine for millennia, but they had adopted farming and the raising of cattle, sheep, and goats from neighbors, and they seem to have taken in some genes from them as well. 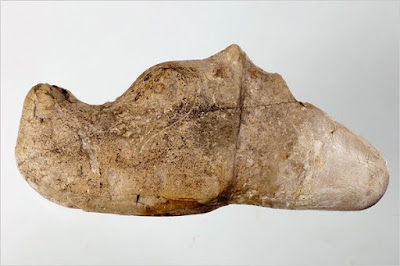 Stone mace head in the shape of a horse's head, Yamnaya culture

One thing they probably did for themselves is domesticate horses. The date of horse domestication is much disputed, and some experts think it took place as early as 6,000 BC. The current view is that horses were domesticated at least twice, once in Kazakhstan by the Botai people around 3800 BC and then again by the Yamnaya people's ancestors around 3600 BC, but that may well change. Horses were fundamental to Yamnaya life, prominent in their iconography and rituals, as well as in the Indo-European religion as we reconstruct it. 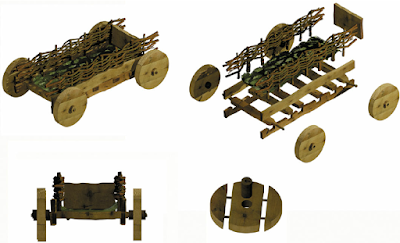 Yamnaya culture proper arose around 3300 BC when the people of the steppes region began living in wagons. Wagons transformed life on the steppes; with wagons whole communities could stay on the high steppes for months at a time, easily bringing along enough goods for housekeeping as they followed their grazing herds. Settlements became less important. Instead, to mark their territories the herders began building great burial mounds (kurgans) on prominent points and burying their chiefs inside them. Their herds consisted of sheep whose long hair could be spun into wool – something created by human breeding – goats, cattle, and horses. Their diet was mostly meat and dairy products, with greens and some grain. 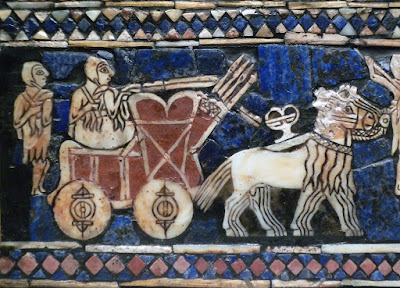 Depiction of a war wagon from the Standard of Ur

Incidentally nobody knows who invented the wheeled wagon. Some say it happened in Mesopotamia, others that it happened on the steppes. Radiocarbon dating has not settled the question because the dates for the earliest wagons in each place are about the same, suggesting that whoever invented them the idea spread very quickly.

Anyway wagons allowed the Yamnaya people to spread out across the steppes, which in turn allowed them to accumulate huge herds of animals. Their chiefs became rich. They developed some of the characteristics we associate with steppes nomads: they were violent, patriarchal, and much given to raiding. Sometimes they stole horses or other animals from each other, and sometimes they raided settled people to steal things to make their lives on the steppes easier. Of course sometimes they also traded with settled people; almost all nomads in history maintained trading relationships with settled communities. In fact some of the Yamnaya people still were settled in farming communities along the great rivers of the region. 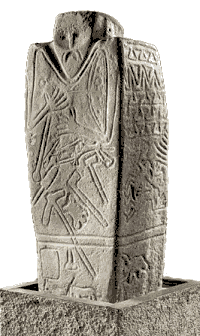 From language studies we know that they had poetry based on patterns of short and long syllables, as in Homeric Greek, and that these poems included both stories and praise poems directed to gods or human leaders. Their pantheon was led by a Thunder God and included a war god, a goddess of the dawn, and divine twins closely associated with horses. 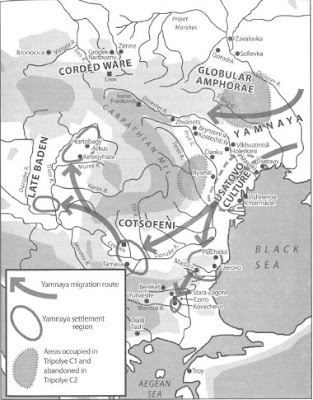 Around 3100 BC the Yamnaya began to spread. They moved southwest into the Danube valley, where their burial mounds are found adjacent to older settlements; there are a few sites that had two graveyards side by side for a while, one in the old local style and one for the Yamnaya leaders. 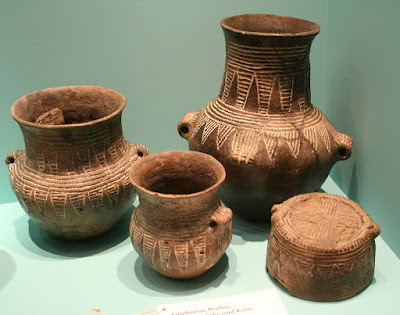 They moved northwest into central Europe, where they fused with an older culture to create a vast culture zone called Corded Ware that stretched from Ukraine to Holland. (See map at top of the post. Besides the cord-marked pots the distinctive artifact of this culture was stone and copper battle axes, and before the Nazis they were often called the Battle Ax People. After the Nazis archaeology went pacifist and naming cultures after weapons became a no-no.) 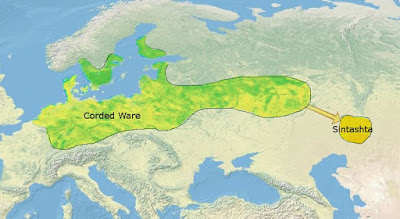 They moved east into central Asia, where their descendants created a chariot-riding culture called Sintashta that seems to be the progenitor of both Sanskrit and Persian culture; most archaeologists think the early Indian Vedas are set in central Asia among the Sintashta people. The latest genetic studies show that Sintashta people included some genes from central European farmers, so we now think they arose from the eastern Corded Ware culture rather than directly from Yamnaya.

Anthony thinks these early migrations closely map the later development of Indo-European languages. In his view the Corded Ware people spoke proto-Germanic, the Sintashta people spoke Indo-Aryan (the hypothetical ancestor of Persian and Sanskrit), the people who migrated up the Danube spoke proto-Celtic and proto-Italic, and those who settled in southeastern Europe spoke proto-Slavic. (Proto-Greek is hard to fit in, because it resembles Indo-Aryan more than any of the other western tongues.) 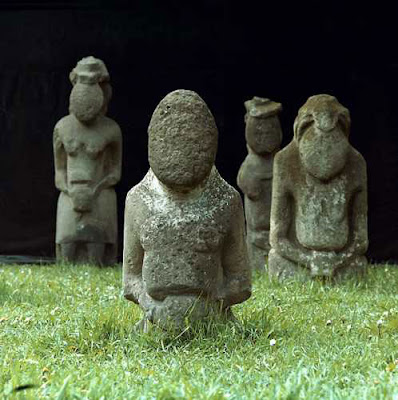 The impressive thing about this archaeological synthesis is that it has been decisively confirmed by paleogenetics. Sometimes it seems as if the things archaeologists dig out of the ground might mean anything, and that the stories about them might be sheer fantasy. But the story of horse-riding, battle ax-wielding conquerors who rode out of the steppes into Europe, Iran and India has turned out to be true. Many of the details remain to be worked out, but the basic shape of the change now seems certain. So all credit to the archaeologists who first understood this vital event in human history: Marija Gimbutas, J.P. Mallory, David Anthony, and hundreds of Russian and Ukrainian scholars whose names remain completely unknown in the west. Sometimes scholarship works.
Posted by John at 10:23 AM