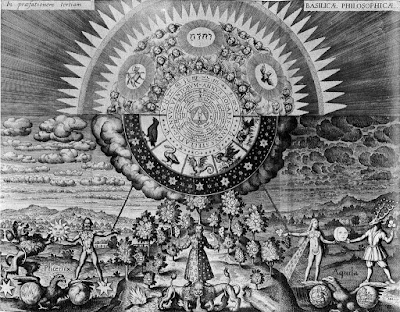 The Secrets of Alchemy (2013) is the best introduction to alchemy that I have read, and it includes some great stuff on the testing of alchemical recipes in modern labs. If you’re curious about alchemy, read it. Meanwhile, a short primer on this ancient and mysterious art:

In the ancient and medieval worlds, alchemy was not distinguished from any other sort of chemistry, and people we call alchemists did other sorts of chemical experiments. But the core of alchemy was the transmutation of metals, especially the transmutation of “base” metals such as lead or mercury into silver or gold. The central goal of alchemy was already established by the time our first surviving alchemical manuscript was written. That is On Apparatus and Furnaces by Zosimus of Panopolis in Roman Egypt, written around 300 AD. Zosimus was already drawing on an extensive previous literature, and he was engaged in debates with his contemporaries. (One of the authorities he cites is a woman named Maria, who gave her name to a method for heating compounds in water that evolved into the bain-marie of French cooking.) Anyway Zosimus gave instructions for methods used in transmutation, especially exposing one substance to vapors drawn from another substance. He described different kinds of transmuting agents, from simple agents that could only (in our terms) catalyze one reaction to the highest level, a substance that could transmute any metal into any other. That supreme reagent came to be called the Philosopher’s Stone. Most authorities did not think it was a literal stone, leading to it being called “the stone that is not a stone” and similar things.

The remarkable thing about alchemy, to me, is that serious, educated people kept on trying to transmute lead into gold down into the 1700s, but none of them ever succeeded. Why did people keep banging their heads against this lead wall for 1500 years? 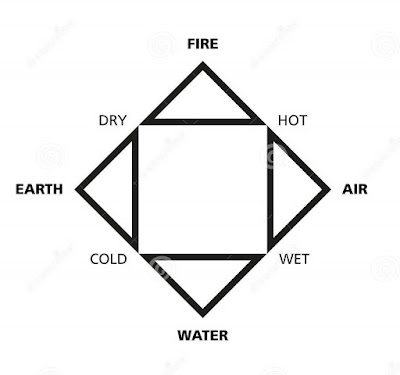 First, because their theories of matter told them that it should be possible. You have probably heard of the most famous ancient theory of matter, the Four Elements of Empedocles. Empedocles taught that all matter was composed of earth, air, fire, and water. To this Aristotle added four characteristics: hot, cold, wet, and dry. There were other theories, but all of them agreed that all the materials we see around us are made up from differing proportions of a few simpler substances. Therefore it ought to be possible to transform any substance into any other. Not everyone agreed; alchemists were regularly attacked by other scholars who argued that the combination of elements to make up gold or silver had been done by God using powers that humans did not and could not possess. But that seemed to many of the more scientifically minded like special religious pleading, and the belief that any substance could be transmuted into any other remained widespread until modern chemistry was established after 1750. Using Aristotle’s schema, most authorities agreed that while lead and mercury were cold and wet, gold was much hotter and drier; therefore, for a thousand years the basic recipes of alchemy involved reacting the cold, wet base metal with something considered hotter and drier, such as sulfur or antimony.

Second, because the chemical manipulations alchemists could perform seemed to those who performed them at least as amazing as turning one metal into another. This is true on multiple levels. The chemistry itself was impressive, turning metals into white powders, red liquids, or crystal trees – that is, when it worked. Some of these reactions are fairly difficult even in a modern lab, and for people working with impure materials and shoddy equipment they could take years of effort. Principe describes trying to replicate one 16th-century recipe that involved an ore of antimony called stibnite. He could not make it work until he ordered stibnite from the same Eastern European region as that used by his source, whereupon the reaction worked perfectly, turning the gray ore into yellow glass. (The eastern European ore contained 2% quartz as an impurity.) You would have to multiply this a hundredfold for workers in medieval conditions. An alchemist who had labored for years to create one of the intermediate products on the way to the Stone and then finally succeeded would have his faith in the overall process dramatically revived. Plus, if it took five years to achieve the first or second step, then perhaps it seemed perfectly plausible that the last might take a lifetime. 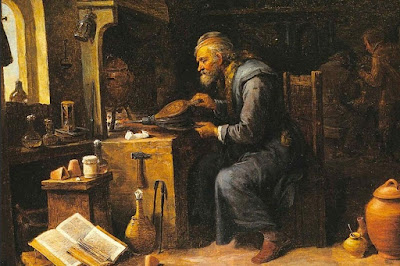 Third, much of the alchemical literature was written in deliberately obscure ways. It is not clear how this started, since Zosimus was already doing it, but it remained part of the alchemical tradition down into the 1700s. Some of the tricks involved giving the materials nicknames, using metaphors for reactions (like marriage for mixing things together) and dispersing knowledge across a whole text or multiple texts, so that a metaphorical description of an action might be given in one chapter and the explanation of the metaphor given in another chapter or book. To the beginner, alchemical texts presented a façade of extreme obscurity that might take years to master. Those who stuck with it were rewarded with membership in a club of real insiders, the magi who understood the obscure texts and used that knowledge to pry into the secrets of matter.

Fourth, and most mysterious, were the many eye-witness testimonies to successful transmutation. Some of these have the feel of folklore or friend-of-a-friend stories, including one about the Byzantine emperor’s storehouse of transmuting powders that goes back to an Arabic text of the 9th century. But others were written in the first person by scholars with reputations for great integrity. Robert Boyle (1627-1691), one of the creators of modern chemistry and a founder of the Royal Society, was convinced that transmutation was real by a mysterious stranger who visited him around 1680. Boyle’s notes refer to him only as “the Traveller.” This Traveller had a paper envelope containing grains of a coarse powder that looked like ground rubies. The Traveller put one grain of this substance into a crucible with mercury and heated it over a fire for 15 minutes. When the crucible had cooled enough for its contents to be handled, Boyle was shocked to discover that it contained, not mercury, but “a solid Body.” It felt, thought Boyle, heavier than the mercury they had started with, and when he tested it later it seemed to be gold. 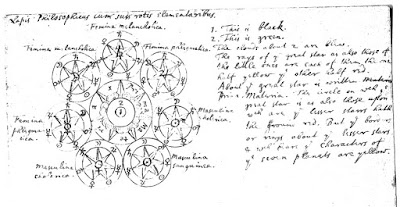 Page from one of Isaac Newton's alchemical notebooks

Many such stories survive from the 16th and 17th centuries. What can they mean? If Boyle’s Traveller was a fraud, what was his goal? Boyle gave him no gold or silver, only mercury that was used up in the reaction. There were plenty of stories about men who said that given some small amount of gold they could multiply it and then absconded with the gold, but there also are many like Boyle’s in which a financial motive is hard to find. Could these stories, even Boyle’s, actually be instructive fictions; by not naming this “Traveller” is he telling us we have entered the realm of myth? That would be, I think, very unlikely for the hard-headed Boyle, whose most famous book is called The Sceptical Chemist. I am not at all sure what to make of these tales.

While scientists of the 1600s like Boyle and Newton were very interested in alchemy, that changed in the 1700s. You might think that learned opinion was turned against alchemy by scientific progress, but that is not really so; the alchemists had been driven out of chemistry decades before Lavoisier and others discovered the reality of chemical elements in the late 1700s. This parallels what happened with witchcraft, which was banished from British and French lawcourts by Enlightenment attitudes a century before the scientific revolution had born much fruit. Anyway the progress of chemistry after 1750 sealed the argument, keeping alchemy out of science for good. But not out of the civilization. People kept practicing alchemy across the 19th and into the 20th century, and for all I know they still do. More interesting is a dramatic shift in how alchemy was perceived. Beginning around 1850 people began to argue that alchemy had never really been about making gold, but was instead a spiritual practice focused on purifying the soul. This view drew strength from some of the metaphorical texts written by alchemists but does violence to their history: they really were trying to make gold, and only a few thought the state of the alchemist’s soul was relevant. But this new idea spread like wildfire through occult and spiritual circles, embraced by people like Arthur Waite (of the Tarot deck) and Carl Jung. From there interest in alchemy entered avant garde artistic circles such as the Surrealists, who made much use of alchemical concepts. 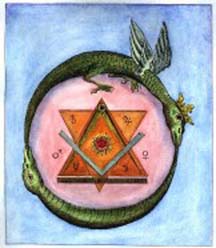 These moderns embraced alchemy because they were fascinated with transformation. Alchemy interested them as a language for speaking about transformation on many levels: of society, of the self, of the soul, of the civilization. And perhaps this fascination with dramatic change also explains part of why so many smart people devoted so much effort to mixing metals and reagents in crucibles and exposing lead to sulfurous vapors for so many long centuries
Posted by John at 8:05 PM

And Boyle didn't ask for the recipe? Man, did he blow that one.

Perhaps the traveler was Eric McCormack.