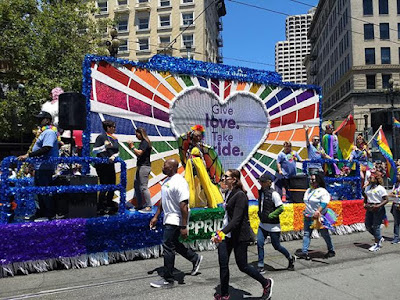 Scott Alexander attended San Francisco's Gay Pride Parade and came away thinking it was eerily reminiscent of both Easter parades in Guatemala and the 4th of July parades he attended as a child. This launched him into a long essay about civil religion and what our new civil religion might be:


I’m a pretty big believer in the theory of an American civil religion. For me, the important part of religion isn’t the part with gods, prophets, or an afterlife – Buddhism lacks gods, traditional Judaism doesn’t have much of an afterlife, and both get along just fine. It’s about a symbiosis between a society and an ideology. On the most basic level, it’s the answer to a series of questions. What is our group? Why are we better than the outgroup? Why is our social system legitimate?

For most of history, all religion was civil religion – if not of a state, then of a nation. Shinto for the Japanese, Judaism for the Israelites, Olympianism for the Greeks, Hinduism for the Indians. This was almost tautological; religion (along with language and government) was what defined group boundaries, divided the gradients of geography and genetics into separate peoples. A shared understanding of the world and shared rituals kept societies together. . . .

The old American civil religion is on the rocks, and conservatives are very worried about it:


Say it with me: patriotism is a great force uniting our country. Now liberals aren’t patriotic enough, so the country is falling apart. The old answers ring hollow. What is our group? America? Really? Why are we better than the outgroup? Because we have God and freedom and they are dirty commies? Say this and people will just start talking about how our freedom is a sham and Sweden is so much better. Why is our social system legitimate? Because the Constitution is amazing and George Washington was a hero? Everyone already knows the stock rebuttals to this. The problem isn’t just that the rebuttals are convincing. It’s that these answers have been dragged out of the cathedral of sacredness into the marketplace of open debate; questioning them isn’t taboo – and “taboo” is just the Tongan word for “sacred”. The Bay Area’s lack of civic rituals (so goes the argument) is both a cause and a symptom of a larger problem: the American civil religion has lost its sacredness. That means it can’t answer the questions of group identity, and that communities aren’t as unified as they should be. 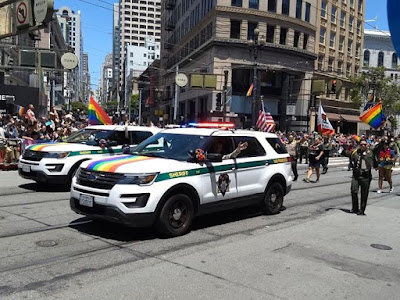 But then consider the Gay Pride Parade and what it celebrates:


The parade itself hit all the requisite notes. Marching bands. Celebrities. Floats. Adorable children. Charitable organizations. The Governor drove by in his shiny black car. The Mayor, surrounded by adoring supporters. Public streetcars and sightseeing buses, festooned for the occasion. . . .

Am I saying that gay pride has replaced the American civil religion?

Maybe not just because it had a cool parade. But put it in the context of everything else going on, and it seems plausible. “Social justice is a religion” is hardly a novel take. A thousand tradcon articles make the same case. But a lot of them use an impoverished definition of religion, something like “false belief that stupid people hold on faith, turning them into hateful fanatics” – which is a weird mistake for tradcons to make.

There’s another aspect of religion. The one that inspired the Guatemala Easter parade. The group-building aspect. The one that answers the questions inherent in any group more tightly bound than atomic individuals acting in their self-interest:

What is our group? We’re the people who believe in pride and equality and diversity and love always winning.

Why is our group better than other groups? Because those other groups are bigots who are motivated by hate.

What gives our social system legitimacy? Because all those beautiful people in fancy cars, Governor Gavin Newsom and Mayor London Breed and all the rest, are fighting for equality and trying to dismantle racism.

I would put it this way: Gay Pride has become a key ritual in the Civil Religion of liberals. I know some gay people are unhappy about how the day has been taken over by mainstream politicians and giant corporations and support for the police, but really it is a perfect way for liberals to celebrate our identity. And, you know, there are only so many ritual templates available to choose from, and a parade is both the most inclusive and communal ritual in our repertoire.

Things change. But other things stay remarkably the same, like our deep tribalism and love of celebrating identity together.
Posted by John at 7:28 AM

Though I (unsurprisingly) find Alexander's definition of religion somewhat impoverished, I nevertheless think this is basically right, especially the point that any human group needs to have some notions that are sacred, and that cannot be questioned. I suppose for conservatives you could say that some combination of the military, guns, and football constitutes a similar form of religion, and play a similar role in group celebration.

I think there's some lack of perspective here and some missing details.

There are only so many cities in the country where parades even happen. They're an event that is restricted not only to large cities, but also to cities that are easily walkable and navigable. They don't EVER have parades in sprawling, poorly laid out cities like Orlando, the most dangerous city for pedestrians in the country. (Not outside of Disney World, anyway, which gates access behind a pretty steep paywall.)

Gay Pride parades basically don't exist except in reasonably big name city centers, away from the inconvenience of suburban sprawl, and I'd imagine a massive percentage of Americans have never even seen one, and only know of them through media depictions. Certainly there have never been any in the middling sized towns or cities I've lived during my life. Gay Pride is largely a metropolitan event.