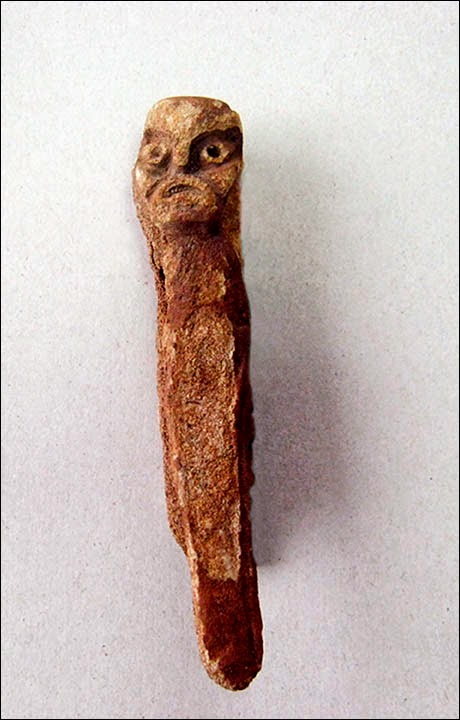 This small wooden idol was dredged up by a Siberian fisherman who donated it to the Tisul History Museum. The experts there said it is pagan god dating to around 4000 years ago. 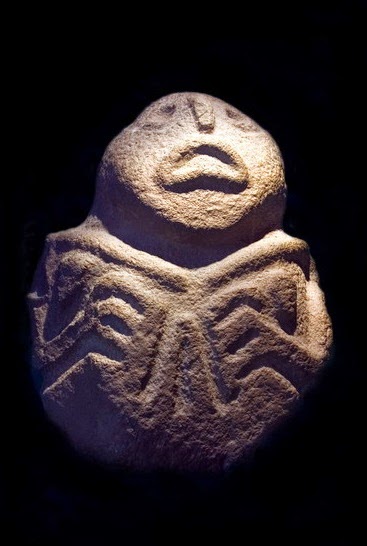 Mike Williams at Prehistoric Shamanism says he thinks it is a fish-man figure; there are lots of fish-men in the art of Old Europe, including the one above from the Mesolithic village of Lepenski Vir on the Danube in Serbia. Native Americans, Siberians, and maybe others imagined the Other World as a place of watery depths, and therefore thought that aquatic creatures might cross back and forth between the land of the living and the land of the dead. In North America the otter was often seen as the shaman of the animals because it passed regularly between the realms of earth and water. Were these fish-men shamans? The economy of Lepenski Vir was probably focused for much of the year on the runs of fish up the Danube, especially the beluga. Here is Williams' interpretation of the fish-man figures:


The run of the beluga upstream in the summer and (even if only figuratively) downstream thereafter, may have been interpreted as the fish crossing and re-crossing a portal to the otherworld (these beliefs survived in the region and in Siberia into modern times). In effect, these were not fish anymore but spirits. Furthermore, these animals readily gave themselves to humans (beluga are incredibly passive when caught); they made clear their willingness to enter the realm of the humans and sustain the people. The annual run of the fish was now far more important symbolically than it ever was economically. The imagery around the site became completely centred on fish (the dead were even covered with fish scales and bones of fish eagles made popular amulets). Over time, people, especially those with particular aptitude for crossing between worlds, (the shamans), shapeshifted into fish and joined them on their journeys to and from the otherworld (and they are reflected in the boulder carvings of half-human half-fish). Perhaps these individuals even led the dead on the route to the afterlife (a common role of shamans), and this was why the dead were aligned facing downstream: the route they had to take in death (again, this belief is still common in the region and in Siberia). When the fish returned in the summer (perhaps led by the same shamans), they brought with them the promise of life. At this time, people built new dwelling with a specially curated corpse of a newborn baby placed into the foundations (possibly reflecting the new life provided by the beluga run). Human life, the life of the village, and the life-giving migration of the fish had almost merged into one, and it was the shapeshifting shamans who oversaw and managed these annual events.

I love this notion that for people who live along rivers, death is seen as floating away  downstream. I wonder how widespread it has been?

I certainly think Williams' notion that the fish-men are shamans is at least as likely to be true as the old idea that these figures represent gods.
Posted by John at 8:40 PM