Crowing about Gadhafi's end, Obama and some of his advisers are touting this operation as a model for projecting American power:

A senior administration official, speaking on the condition of anonymity to discuss internal thinking, described Obama’s strategy as one that “uses U.S. military power in a more focused way with smaller footprints, leveraging our very unique capabilities.”

“When we took office, you had an approach of very large U.S. military footprints in Iraq and Afghanistan,” the official said. “We’ve moved toward a far more targeted approach that leverages U.S. military capabilities rather than large forces overseas”. . . .

“We’ve taken out al-Qaeda leaders, and we’ve put them on the path to defeat,” Obama said. “We’re winding down the war in Iraq and have begun a transition in Afghanistan. And now, working in Libya with friends and allies, we’ve demonstrated what collective action can achieve in the 21st century.”

What this reminds me of is the early thinking of Donald Rumsfeld, who also wanted to emphasize America's "unique capabilities" -- air power, drones, special forces -- instead of sending in large American armies. The overthrow of the Taliban, engineered by Rumsfeld, was a perfect example of this kind of operation. Obama's emphasis on "collective action" riles up today's Republicans, but in Afghanistan we also relied on NATO allies and Afghans who hated the Taliban. The Rumsfeld doctrine failed when it came to overthrowing Saddam, an operation that required a large ground army, but of course I don't think we should ever have attempted that. My general presumption is that if we need a large ground army, because nobody else wants to fight beside us, we should probably stay home. And since Afghans don't much want to defend their government against the Taliban, we should get out and let events take their course. 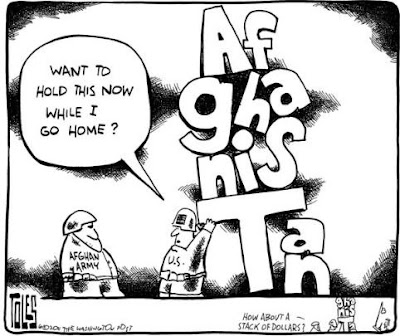