The Tomb of Emperor Wen of Han 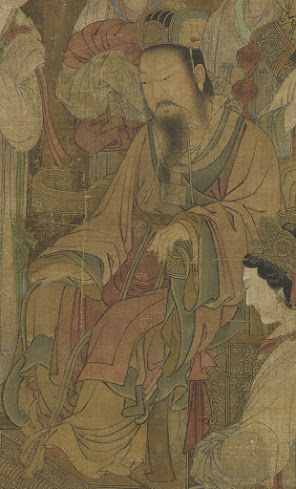 Much later (Sung Dynasty) painting of Emperor Wen, shown as a Taoist sage

Chinese archaeologists have announced the discovery of the tomb of Emperor Wen of Han, who reigned from 180 to 157 BC. Emperor Wen was credited with restoring stability to the empire after the quasi-rule of the Empress Dowager Lu, but then dowager empresses always got bad press from Chinese historians, so who knows? The sources are far from perfect. Anyway Wen's reign was remembered as a comparatively peaceful and prosperous time, when the annual property tax was usually 1/60 and never rose above 1/30. (In both Chinese and European lore, low taxes = a good reign.) 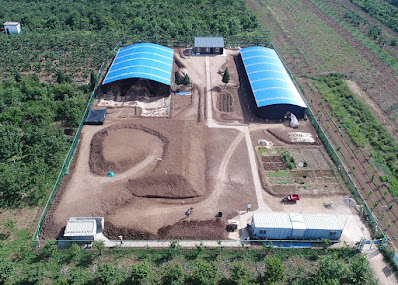 His tomb was only recently discovered because people believed for 2,000 years that it was somewhere else, under a hill known as the Phoenix's Mouth just outside Xian City. Archaeologists exploring that area found ten stone tablets honoring Emperor's Wen burial place, all installed in much later periods. Eventually, though, archaeologists figured out that the Phoenix's Mouth is a natural hill, not a tomb at all:

What would prove to be Emperor’s Wen’s actual tomb was discovered a mile or so away from the mountain in 2017 during an emergency excavation to counter looting activity. It may have originally been a pyramid as was typical of imperial tombs of the era, but if so, the mound was flattened over the millennia. It’s also possible the Emperor ordered a less prominent tomb, as he was famed and respected for his frugal approach to leadership. It wasn’t recognized as an imperial tomb until excavations revealed its shape and monumental size (230 feet long, 100 feet wide). 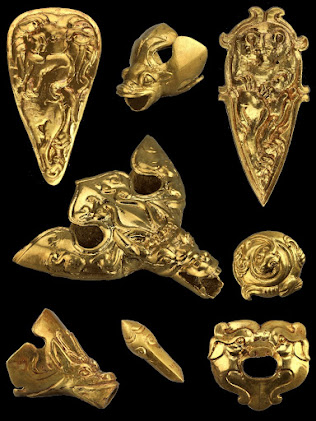 The central tomb has not yet been excavated; all that you see here comes from eight of the estimated 110 subsidiary graves and offering pits that surround it. These gold ornaments come from the tomb of Empress Dowager Lu. So I guess however bad she was a ruler, she still merited a tomb next to the emperor's. 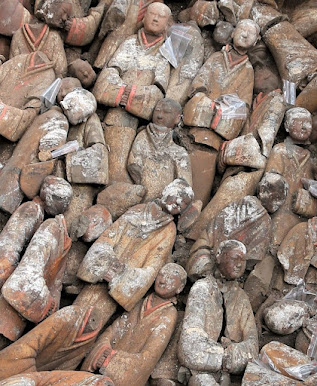 Ceramic figures of servants and attendants, also from the tomb of the Empress Dowager. 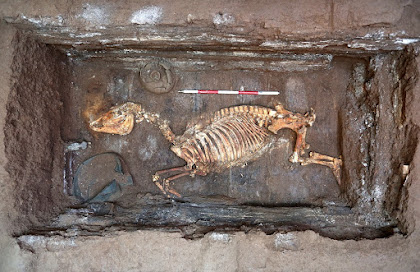 A horse burial. The emperor's favorite mount? The empress's? 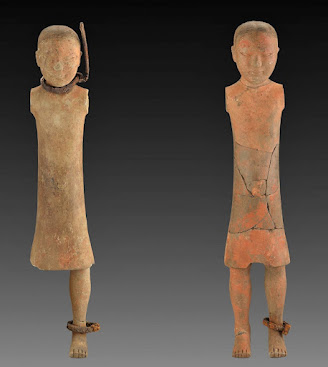 Figures of prisoners, from a pit full of them. The History Blog has many huge images of the tomb.

The astonishing imperial tombs of classical China represent, I think, the convergence of two trends: first, the use of the deceased emperor's burial as a means of proving the legitimacy of his heir. You see this around the world, the funeral rites of the deceased ruler doubling as the real proof that the successor is firmly in control. This is most common when the transfer of power was not yet regularized; for example the spectacular royal tombs of Anglo-Saxon England all date to the first two or three generations of the royal dynasties. In the Chin and early Han periods imperial rule in China was still fairly new, and the successor's claim to rule the whole empire was disputed from many quarters.

Second, the Taoist obsession with immortality, which convinced some people that the correct rites could guarantee a glorious afterlife.

(Note that many people who practiced grand funerals with rooms full of grave goods did not think this would help the deceased; it is naïve and often  incorrect to assume that people put weapons or pots full of food into graves because they thought the dead could use them. Funerals have always been for the living. But there were some cases, notably classical China and ancient Egypt, where people do seem to have believed that the rites helped the dead, and that more gifts might lead to a better afterlife.) 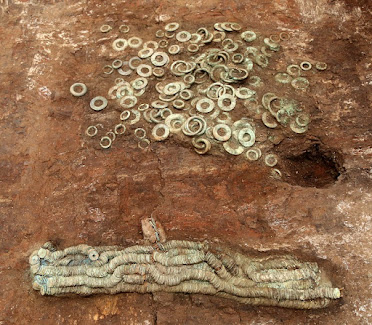 Anyway how astonishing that these tombs exist, and how wonderful that we can see these old and haunted things.
Posted by John at 8:17 PM

Do low taxes = a good reign in European history? I'm not sure of that. For one thing, I can't think of a European monarch famous for their low taxes. For another, it seems to me in European history the well-remembered monarchs are usually the militarily successful ones, and war was the reason for high taxes.