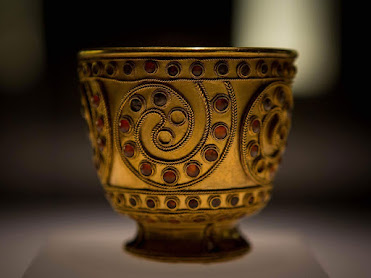 Gold goblet from a burial mound in Georgia, c. 1800 BC

Drawing bought for $30 at an estate sale might be by Albrecht Durer and therefore worth millions.

The folks behind The Missing Princes Project say that one of Richard III's nephews survived and lived under an assumed name in Devon. I think they've seen too many Dan Brown movies.

Fatal police shootings of unarmed suspects plummeted in 2021, from 60 to 25. Especially impressive since other homicides went up.

Poeple are pinning a lot of hopes on the James Webb Space Telescope, which I think is a sign of how frustrated astrophysicists are with their inability to understand or agree about dark matter, dark energy, cosmic inflation, etc. Given its complexity, if the telescope works at all that will be quite an engineering achievement (article, 31-minute video)

Certain very diffuse galaxies seem to contain no dark matter, and new observations confirm this result. But this isn't really evidence against the theory of dark matter, because the observations don't fit any of the major alternatives to General Relativity, either.

More musings on Thomas Mann's "Reflections of a Non-Political Man," arguing that art is supposed to show us the great cost of always being moral, and the oppression of always doing the proper thing for a citizen.

Wakusha and the ambiguous sexuality of adolescent males in old Japan. Interesting but I don't find it useful to consider youth as a third gender.

Vox says the popular culture of the Obama years (Harry Potter, Hamilton, Parks and Recreation) celebrated earnest attempts to make the world better, and that is now totally cringe.

Interviewer Tyler Cowen's tips on how to ask good questions.

Kevin Drum reports that school bullying has decreased a lot over the past 20 years.

Russian archaeologists find a birchbark letter in Novgorod dated 1144, another piece of ordinary business from the 12th century.

How to build trust across political divides: the key is not to seek uniformity but to accept real viewpoint difference. This won one of David Brooks' Sidney Awards for 2021.