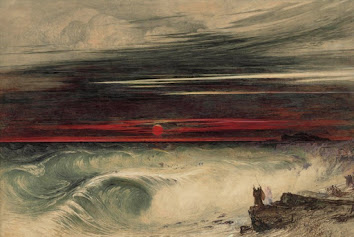 Louis Menand is for me the best contemporary writer on American intellectual history. In this wonderful New Yorker essay he reviews two books by Great Books teachers bemoaning the state of higher education and shows with clarity what the sound and fury is all about.

Spectacular images of the northern lights at My Modern Met.

After a talk, David Brooks was once handed a question card from someone in the audience that read, "What do you do when you’ve spent your life wanting to be dead?" He didn't answer at the time but has been wondering ever since about what sort of answer he might have given. (NY Times)

Does anyone read the syllabus? To find out, an instructor hid a $50 bill in a university locker and put the locker number and combination in the syllabus. Nobody claimed it. Of course this might not be true, but I find it believable.

The cabarets of bohemian Paris, 1890s, where you could visit establishments themed to represent heaven, hell, death, and sundry other realms.

The absurdist satire of the Birds Aren't Real movement (NY Times). The originators say claiming that birds are really government drones that recharge on power lines is a way of mocking crazy conspiracy theories. I suspect, though, that the long-term impact of this sort of absurdity will just be further muddying the waters; all sorts of stuff circulates online that shades the boundary between serious claim and joke, so making more jokes in the guise of serious claims won't help.

One downside of being a famous, much-beloved author is the maniacal attention people will pay to everything you ever did; consider all the writing and speculation about Borges' brief visit to St. Andrews in Scotland.

Earring from the medieval Middle East found in a Danish field. Interesting about Vikings but also about the staying power of earring design.

Why do Kenyan students keep setting their schools on fire?

Fights over egg bans in Indian cities: some Hindus find the public sale of meat offensive, and under the Modi regime some cities have banned food carts selling all meat products. But the patrons of the very common food carts selling egg dishes are also mostly Hindu; it seems to be a dispute about caste and class as much as religion. Interesting that while Hindu nationalists in the government are pushing egg bans other parts of the government are pushing egg production for economic and health reasons. (NY Times)

Carla Rhodes set up an automatic camera on the ground beneath her bird feeder.

Scuba diving YouTuber Jeremy Sides solves another cold case. (Washington Post) Sides looks for cases of people who went missing in their cars and explores local waterways until they turn up. Another interesting look at what people can do for work in the post-industrial age.

BBC report on Black Axe, a Nigerian student fraternity that became a deadly criminal gang. The main source of their revenue is internet scams.

Mormon fertility in the US has been plummeting since around 2004, and is now just above replacement.

Why Twitter is both fun and dangerous: insider knowledge, the theory of jokes, and "context collapse."

This is Colossal's picks for the best short videos of 2021.

Neal Moore, who has spent the past two years paddling a canoe across the United States from Astoria, Oregon to New York City, reached the Statue of Liberty on December 15 and concluded his journey. This was very much a late 1800s thing to do, a memory of a time when people got famous for stunts like crossing the Atlantic by rowboat or canoeing the length of the Mississippi. As a child I was always puzzled by the fame acquired by Lindberg for flying solo across the Atlantic, not understanding that this was the tail end of the great Era of Exploration, when filling in the map and connecting the world's people's had devolved into a series of media stunts. Cool that Moore did this, though, in an age when it won't make him rich or famous.

Does anyone read the syllabus? To find out, an instructor hid a $50 bill in a university locker and put the locker number and combination in the syllabus. Nobody claimed it. Of course this might not be true, but I find it believable.

Even if true, the failure to claim it doesn't indicate anything - people might have read it and thought it was a joke, or believed the claim but simply got failed to follow through for any number of reasons (got distracted, forgot about it, couldn't find the locker, mixed up the numbers in the combination, had "correct" locker and combination buy instructor made a typo on the syllabus, etc.)

Here's John McWhorter clapping back at the "down with Great Books" books:

Here we have to make short description of the course, which is not exactly equivalent to syllabuses I believe. Every year we are reminded that we must make students aware of the description, so I dedicate first few minutes of the course to read it and highlight most important points. It does not really work, they are usually surprised to find out I really do what I declare to do in the description - so if this is the cases for me, it's absolutely believeable that nobody read syllabuses in US. After all, administration does not know a zilch about what we do, they just check whether proper papers exist and fall into proper categories ("students will work in pairs. Fulfills requirement K_12.1")